A Few Days in Escalante, Utah 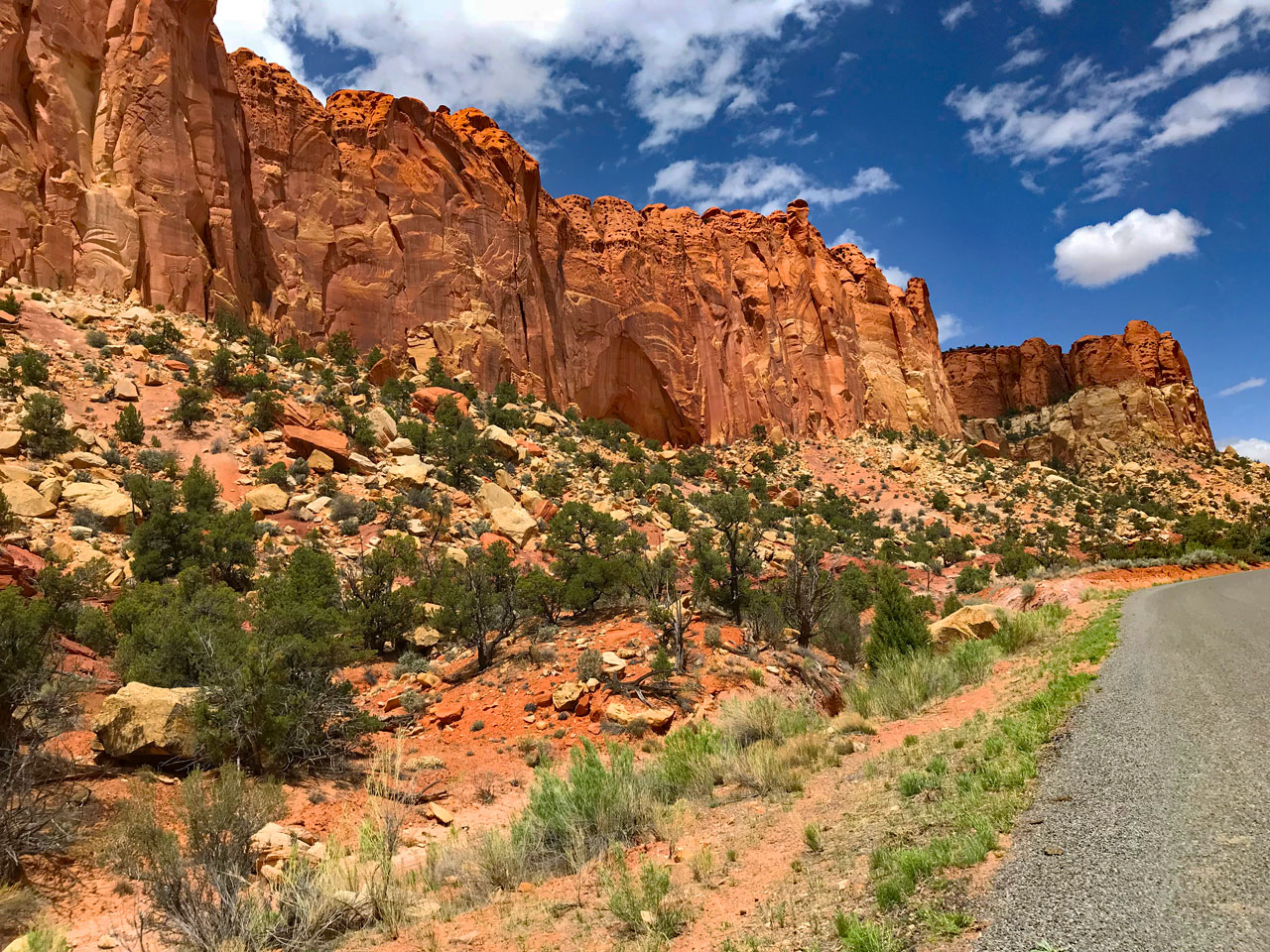 The drive from Bryce to Escalante is only about 50 miles.  It’s nice to have a short travel day 🙂  I find a lovely camp on the edge of a cliff in Grand Staircase Escalante National Monument, about 8 miles east of the town of Escalante. 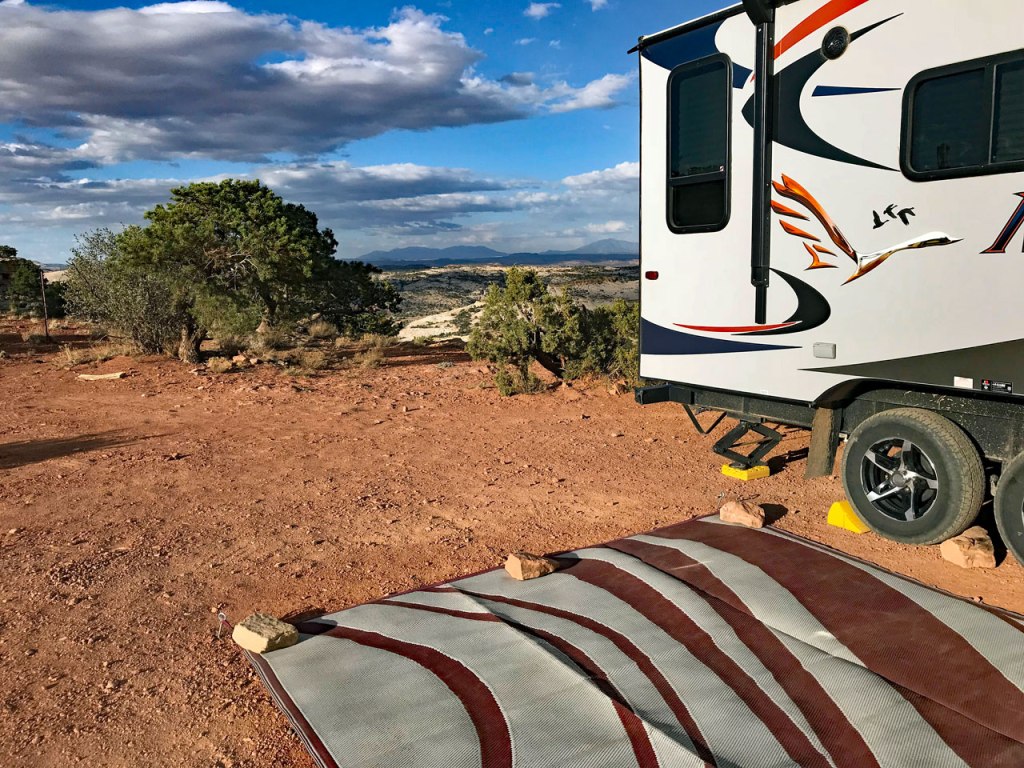 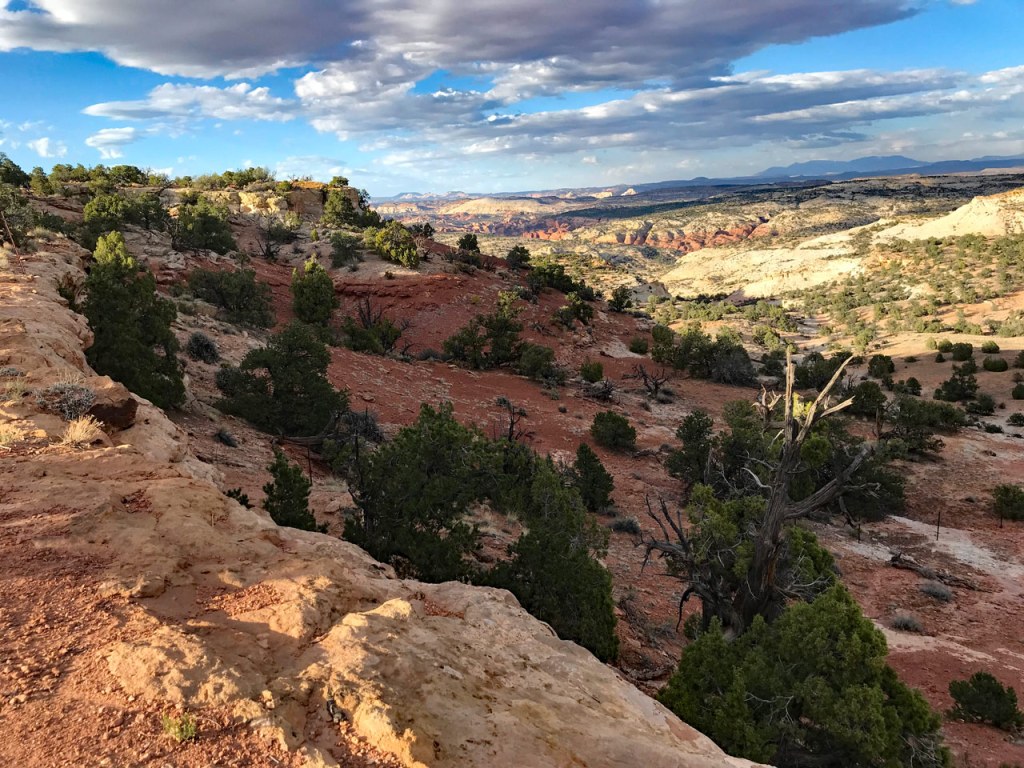 View from my campsite

This area of Escalante/Boulder Utah is still pretty rustic. There is one small grocery in Escalante and three or four gas stations. Cell service is almost non-existent. I get Verizon 1x on my phone most of the time. I get email sporadically, but no internet. Thankfully, the Escalante Interagency Visitors Center provides free wifi. The speed is pretty good.

I’m glad that I traveled on Wednesday, as Thursday thru Saturday had the high winds that were forecasted. Friday evening I was afraid the wind was going to blow me off the cliff!! I think the wind was gusting up to 30 or 35, which isn’t really strong enough to do that. But still, it was a little unnerving.

There are a couple scenic byways in the area that I want to see. One is Hell’s Backbone, which I decide to do on Friday. This road goes from Boulder, UT around the side of Boulder Mountain and down into Escalante. The first few miles on each end are paved, the rest is gravel. It was pretty washboardy in spots. The suspension on the F250 is so stiff, it doesn’t do well on washboard. It feels like every nut and bolt is going to rattle loose. 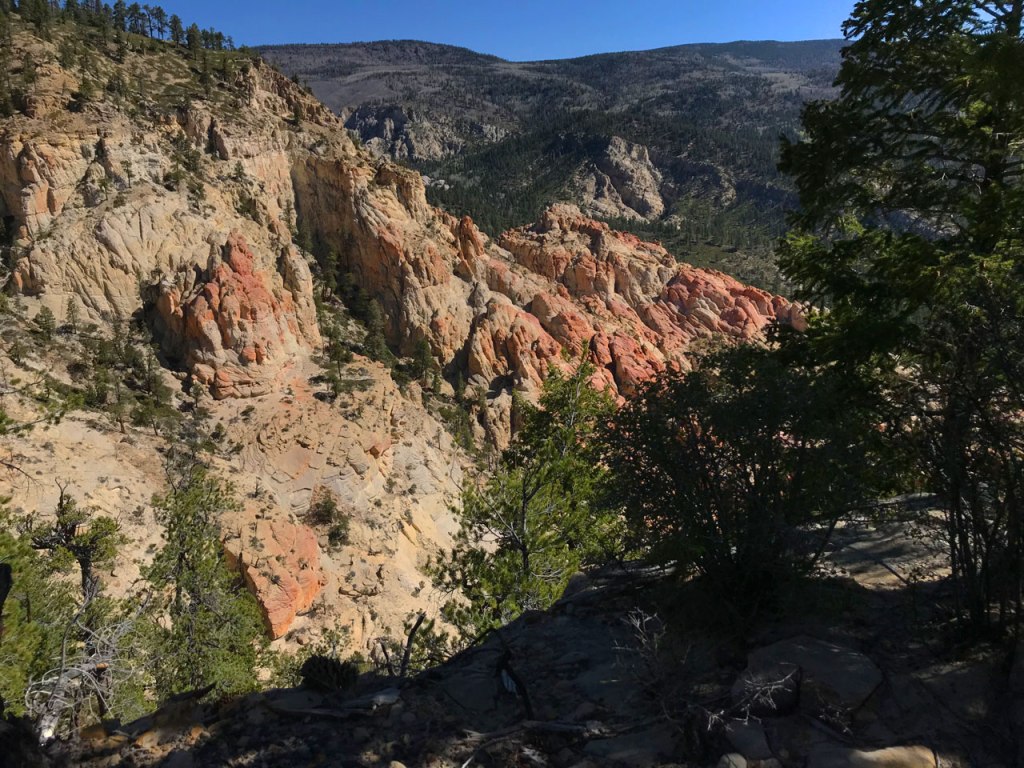 The road was constructed by the CCC back in the 1930’s and was the first road between Boulder and Escalante. It mostly goes through pine forest, but about half way it crosses the Box-Death Hollow Wilderness area. There is a (modern) single lane bridge that spans the canyon. It is a beautiful area. 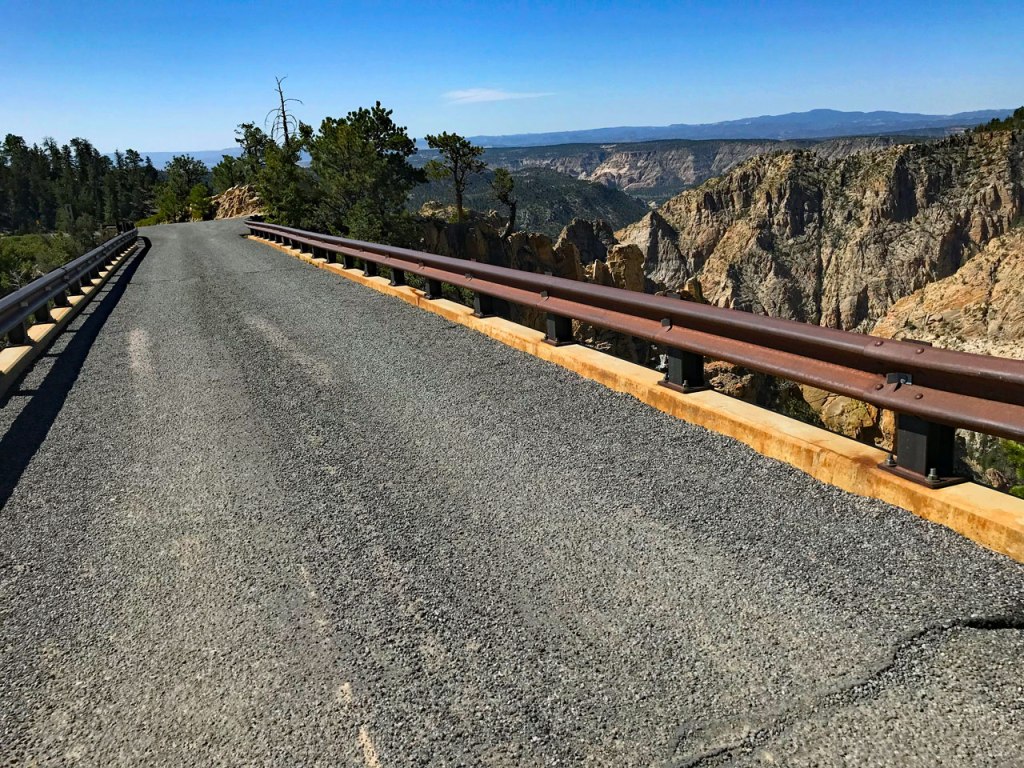 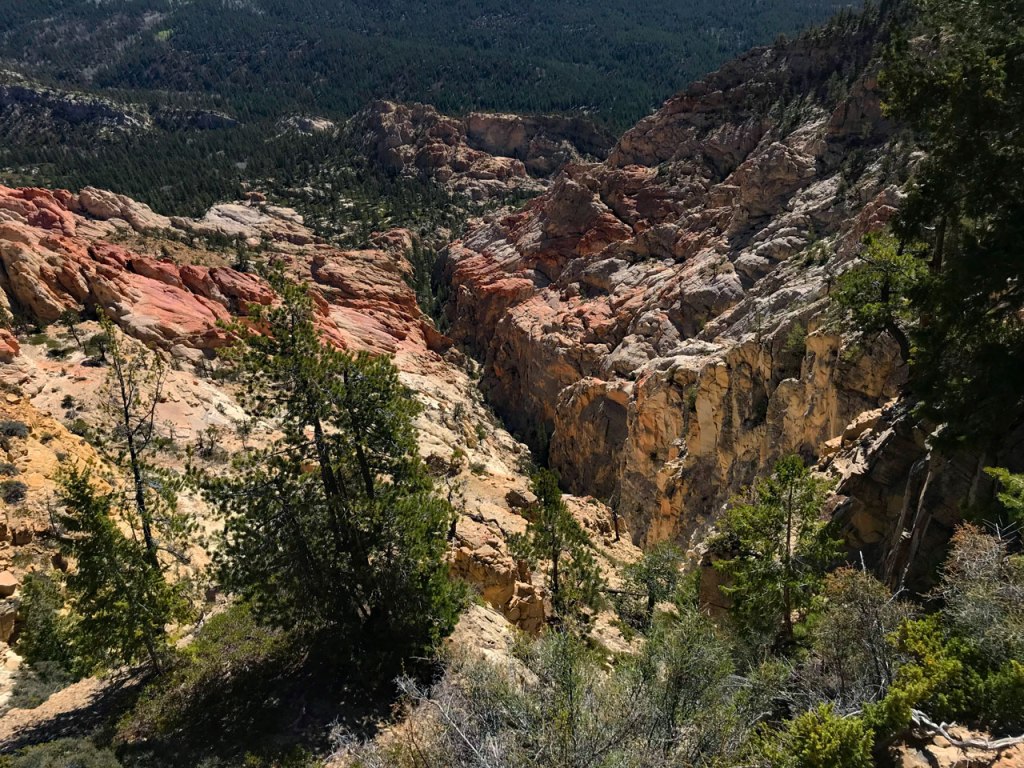 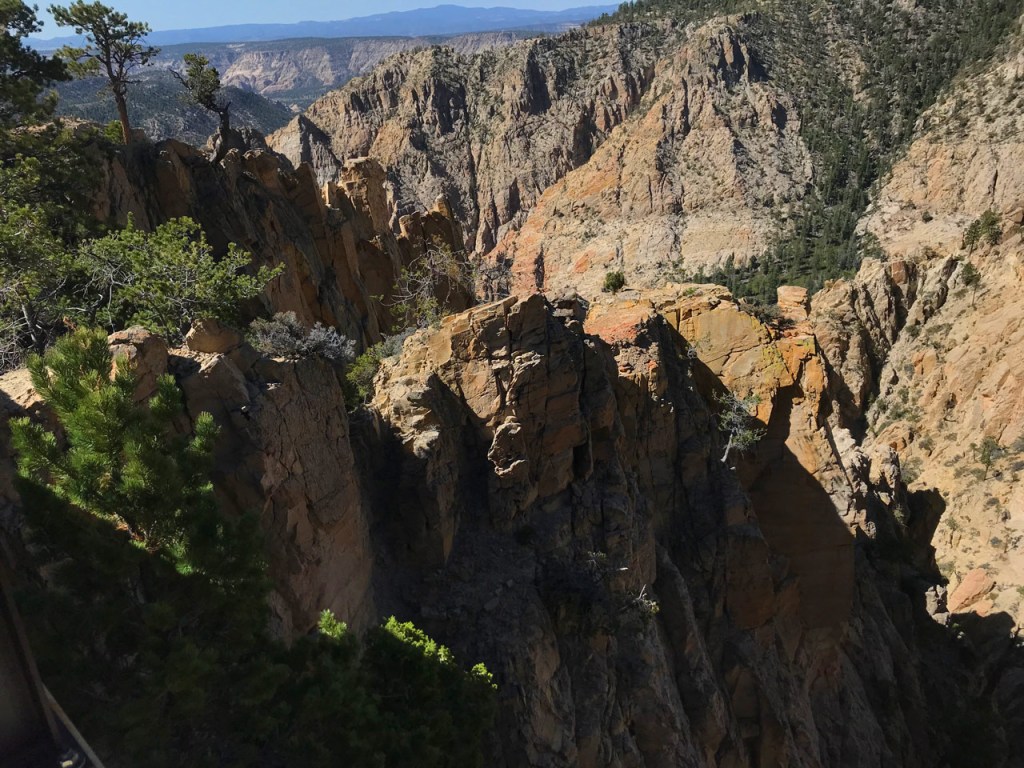 Friday I went into Escalante to use the wifi at the visitors center. I worked on the previous blog post and took care of some other business online. Then went to grocery store and back home. I had hung the hummingbird feeder on a little pine tree and had some black-chinned hummers visiting it. The wind was so strong that all the nectar spilled out. So I improvised a way to hang in on the ladder so it is protected from the wind. 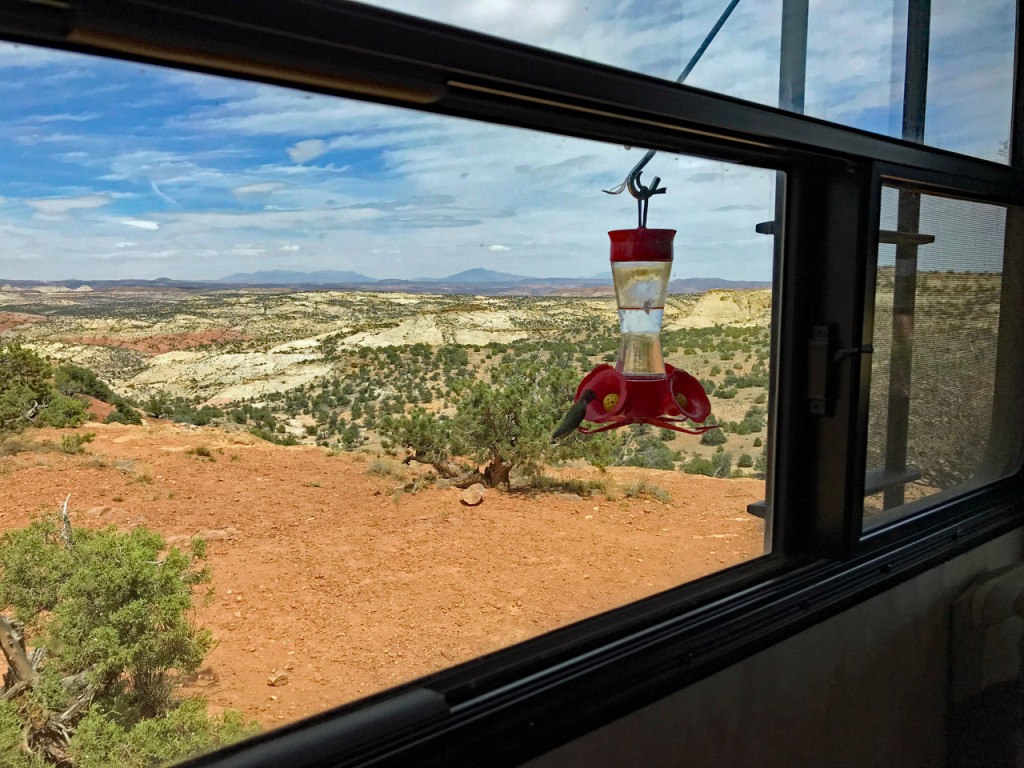 One of the hummers is so cute – he circles around to each of the stations as if they were real flowers and he must visit each one to get the nectar.

On Saturday, I drove to Boulder, about 18 miles east on Hwy 12. The Anasazi Indian State Park is there. It is a small museum with a collection of arrowheads and other artifacts. It is on the site of a pueblo which has been excavated. They also have free wifi 🙂 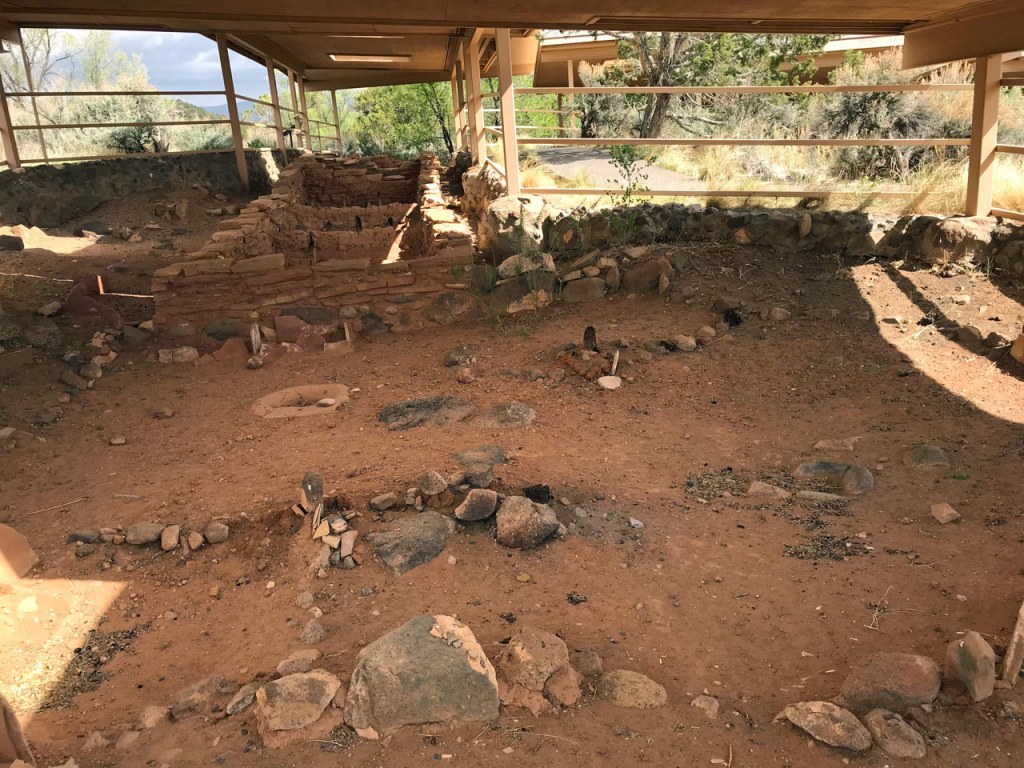 After leaving the museum, I go to Burr Trail, which goes into GSENM. The first 30 miles of the road is paved. It becomes gravel at the boundary with Capitol Reef National Park. It continues on to the Bullfrog Marina on Lake Powell where there is a ferry that runs on a limited schedule. I chose to do this drive on Friday as there is a 50% chance of rain. I didn’t want to be out on one of the unpaved roads and get stuck if there was a heavy rain. When this red clay gets wet, tires just spin on it and the roads are impassable. And I was hoping the road to my camp wouldn’t get too much rain 🙂 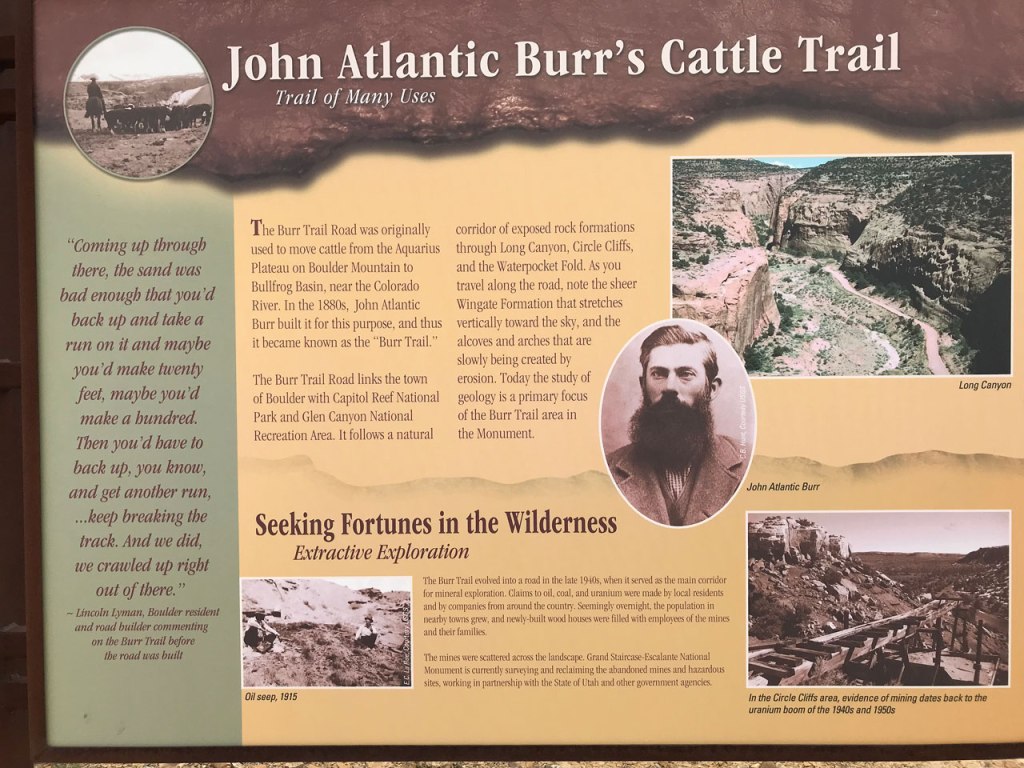 The road travels across the plateau for a few miles. 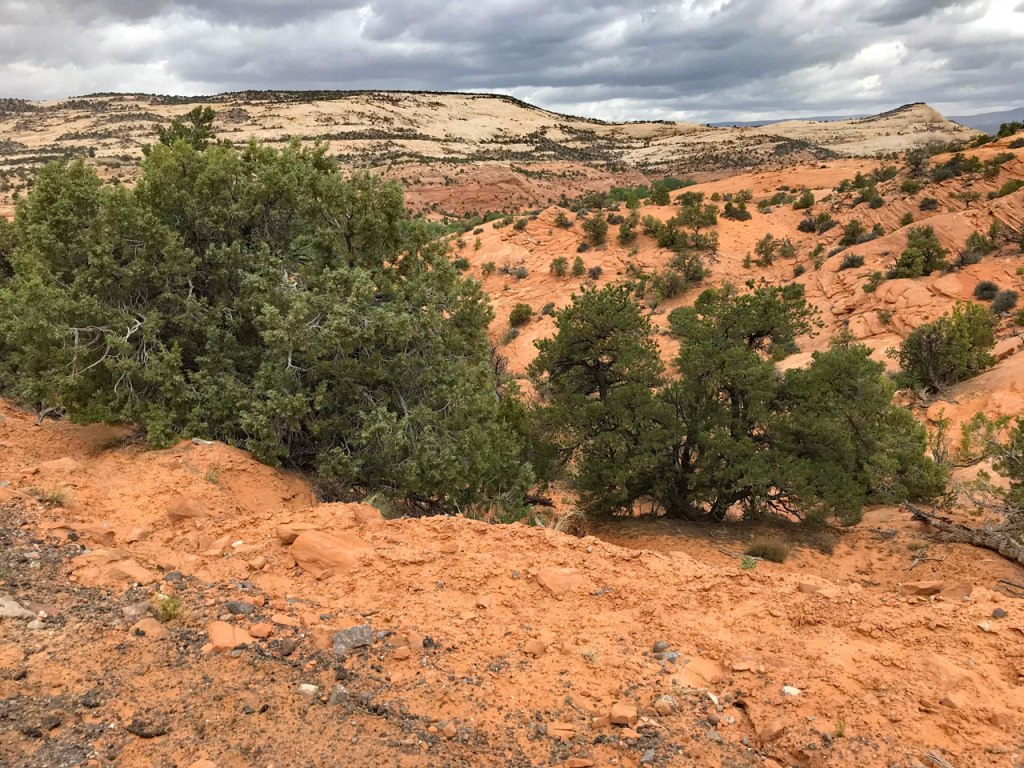 Then it drops down into Long Canyon. To me, this was the prettiest part of the drive. The canyon has sheer walls on both sides. 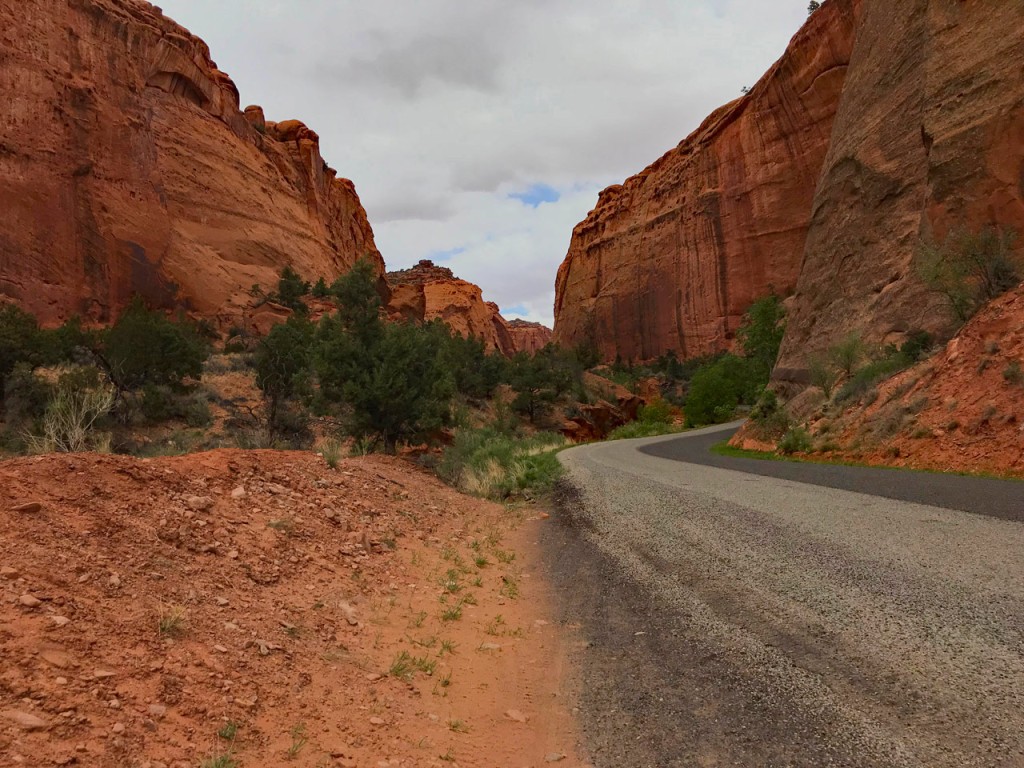 About halfway along, there is a small side canyon one can walk up. 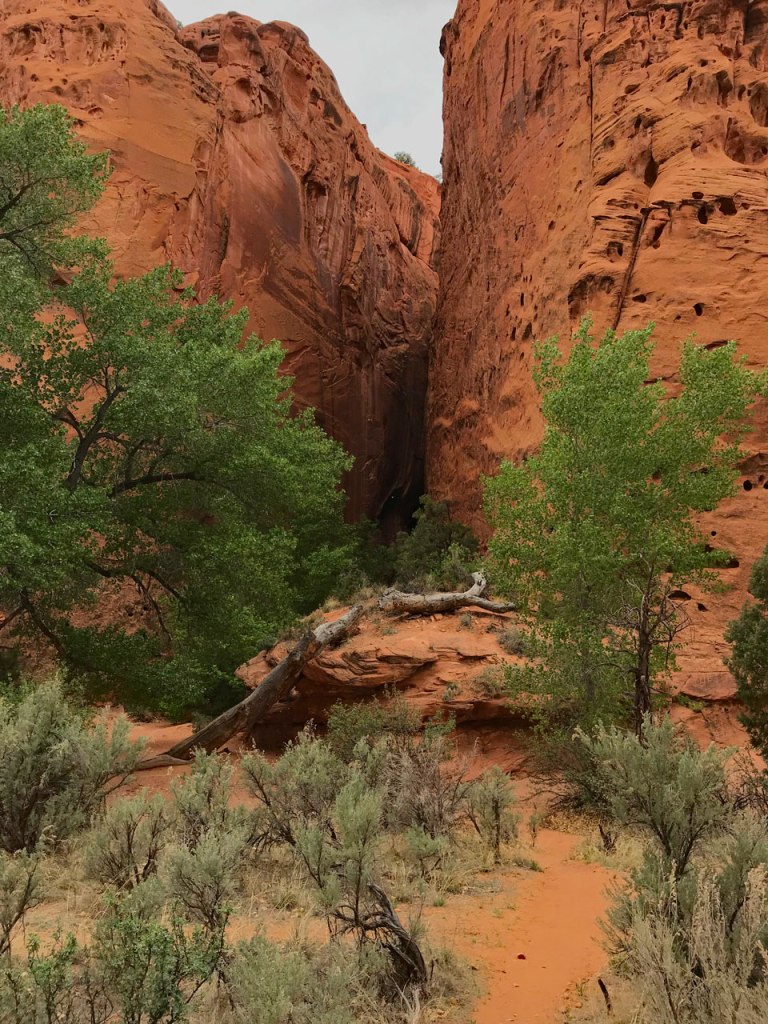 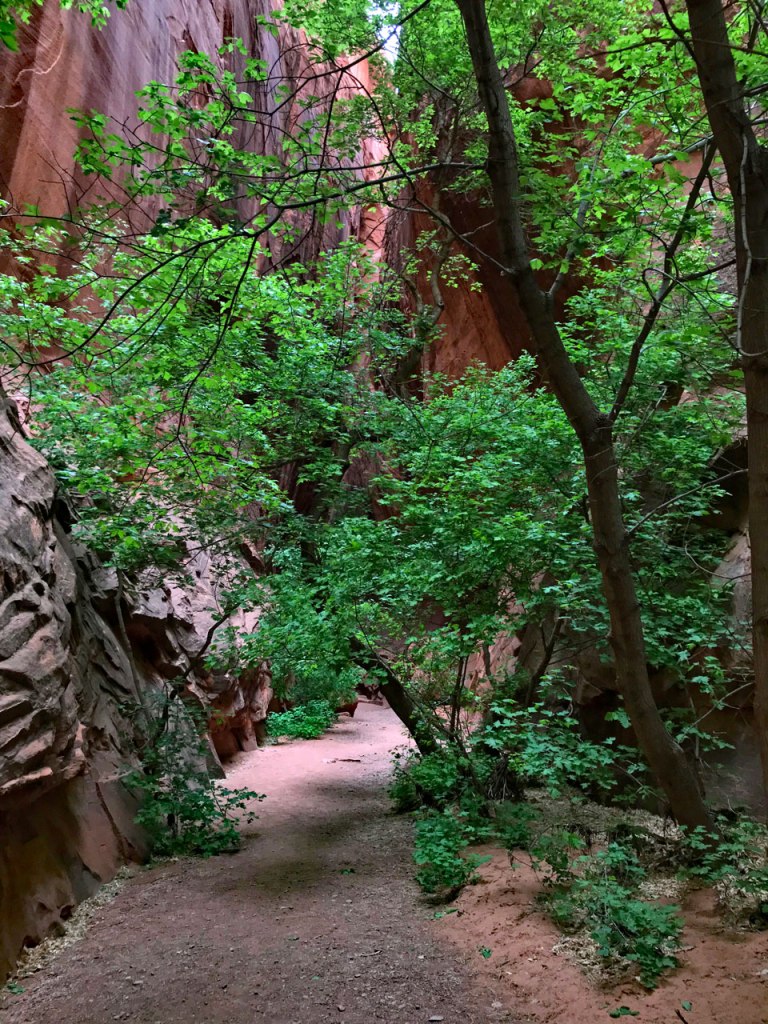 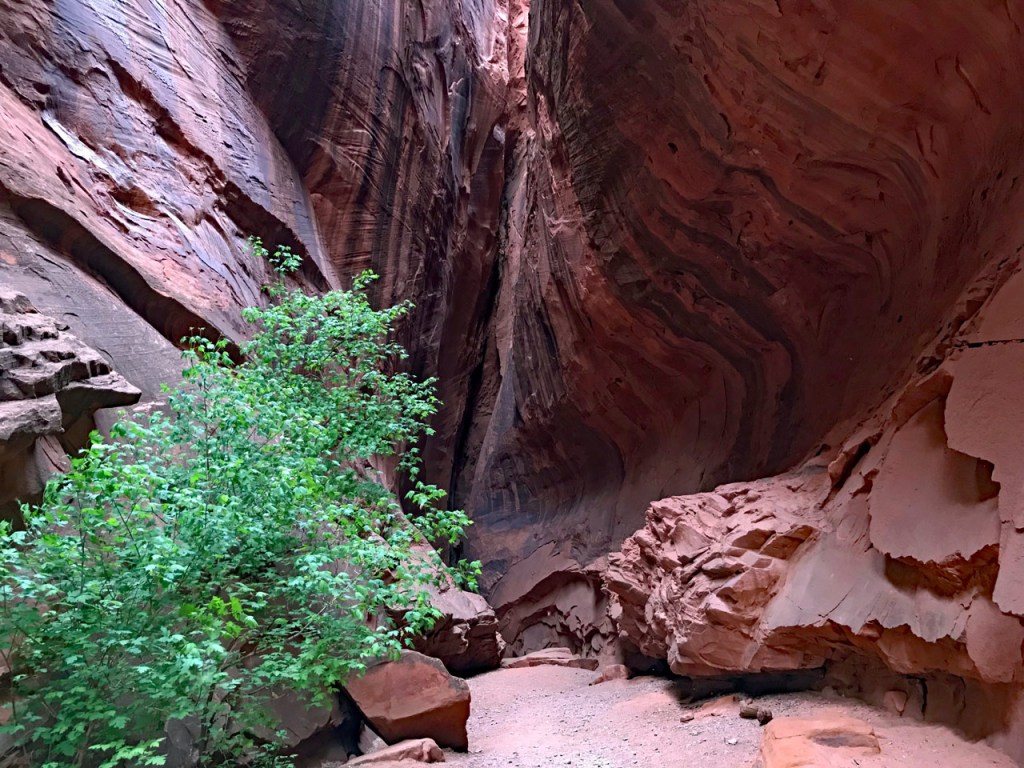 I love the chocolate stripes in this large alcove next to the small canyon. 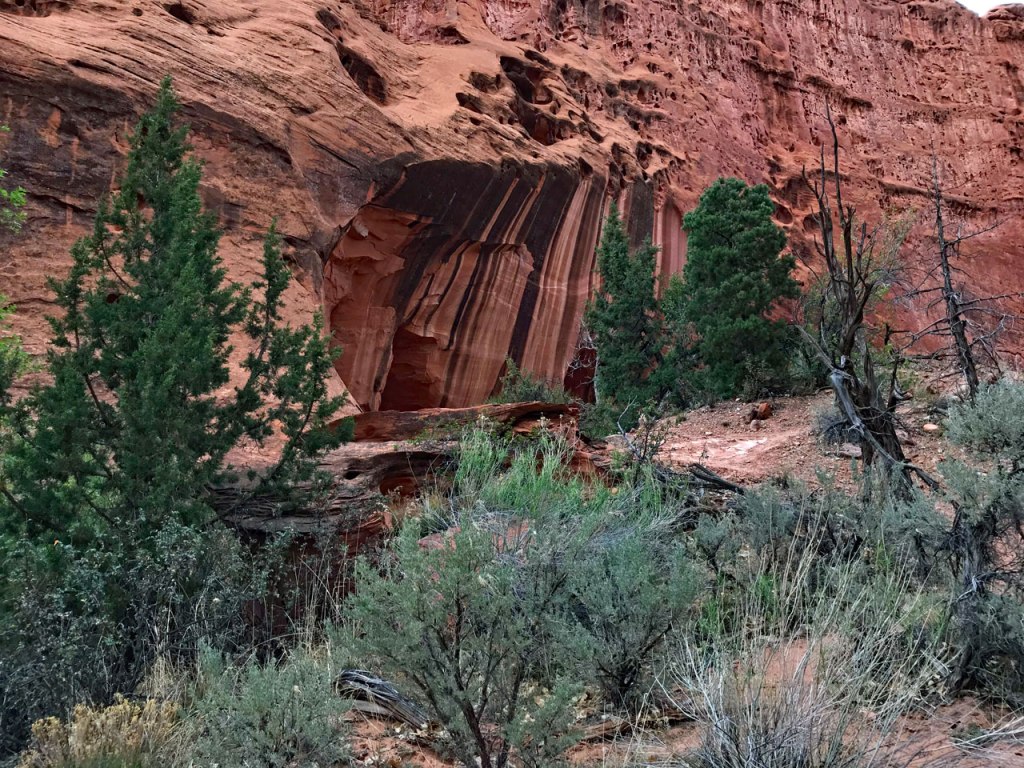 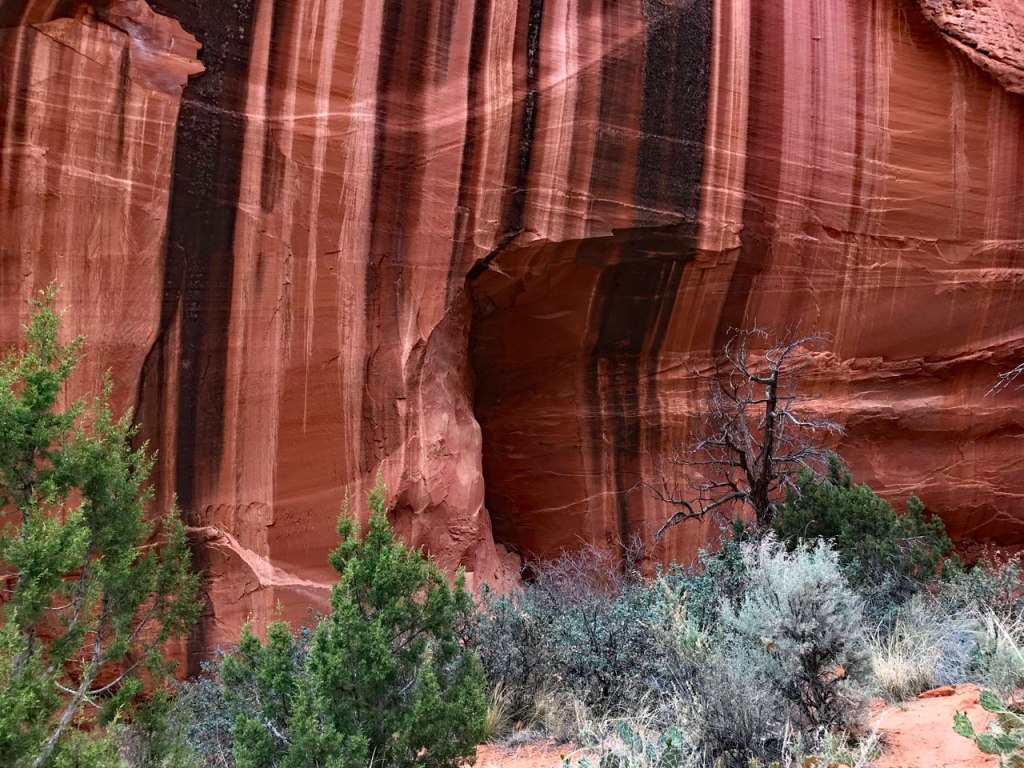 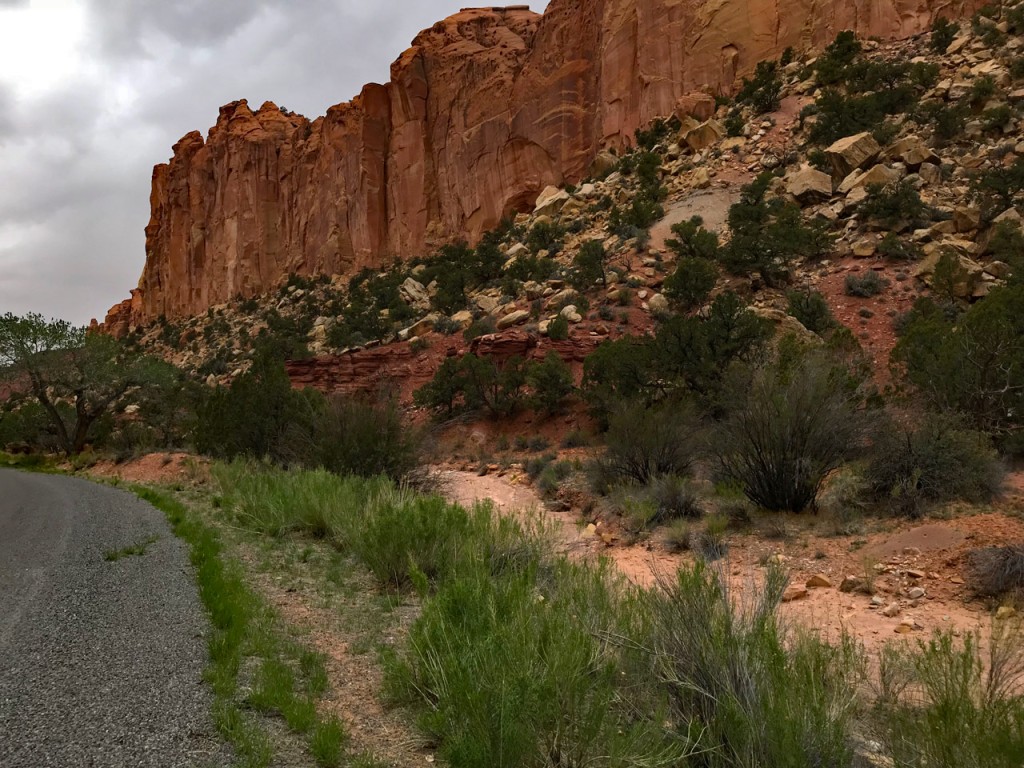 Upon leaving the canyon, the road climbs back up on the plateau, where in a few miles the pavement ends and the road enters Capitol Reef National Park. 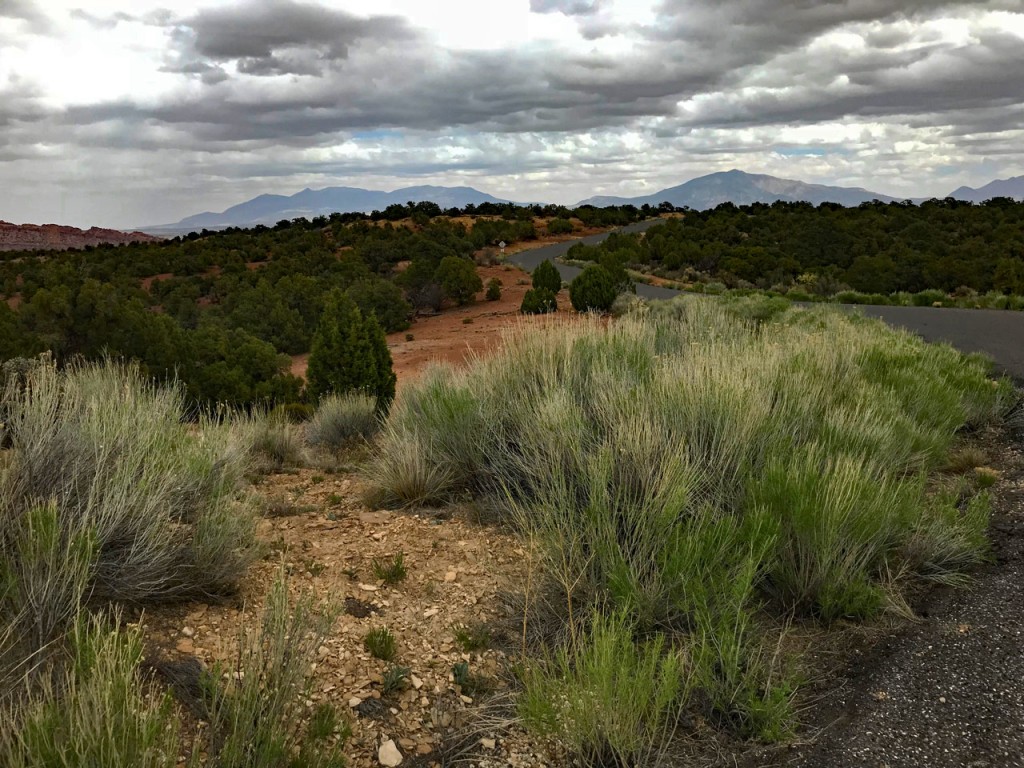 I drove a couple miles down to get a better view of the Waterpocket Fold. This is a 100 mile long monocline formation, which is named for the large number of waterpockets found in the area. The rock layers on the west side of the fold have lifted  higher than the east side.  The park is named for this reef-like formation. Just beyond are the Henry Mountains, which are visible from my campsite. 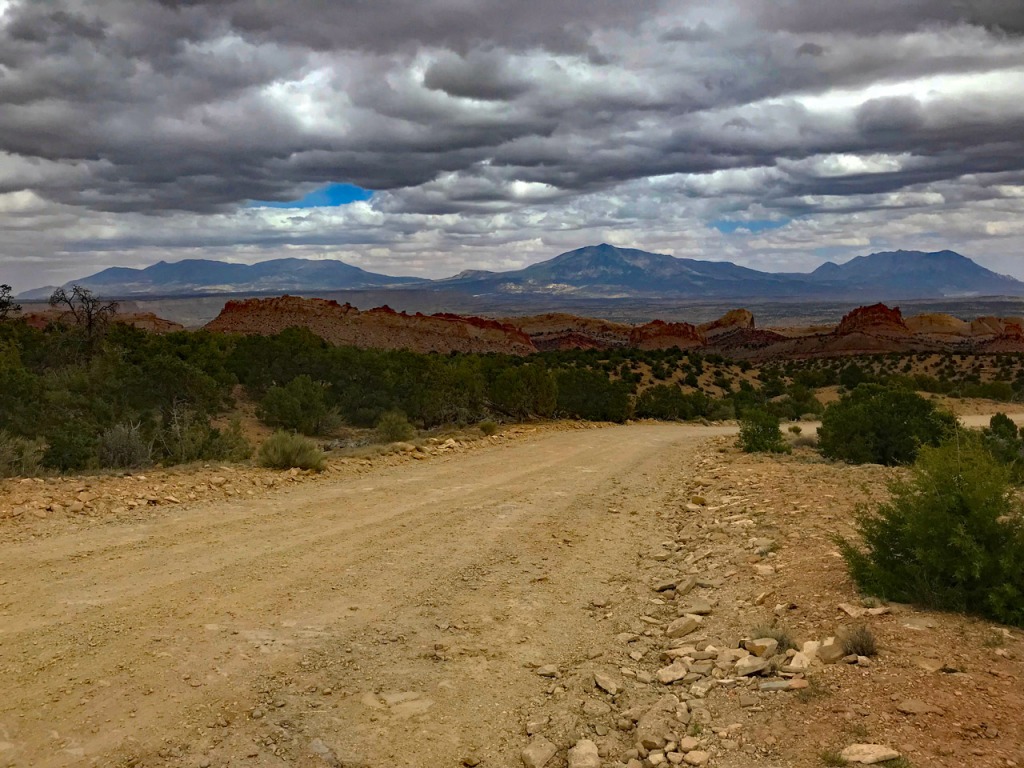 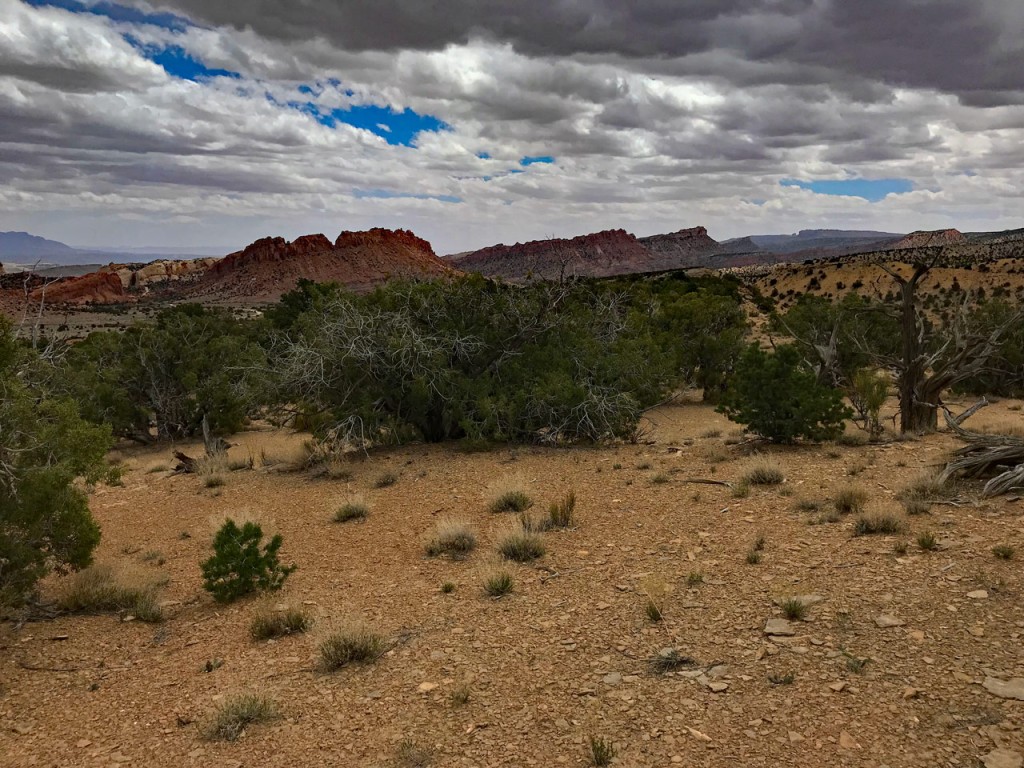 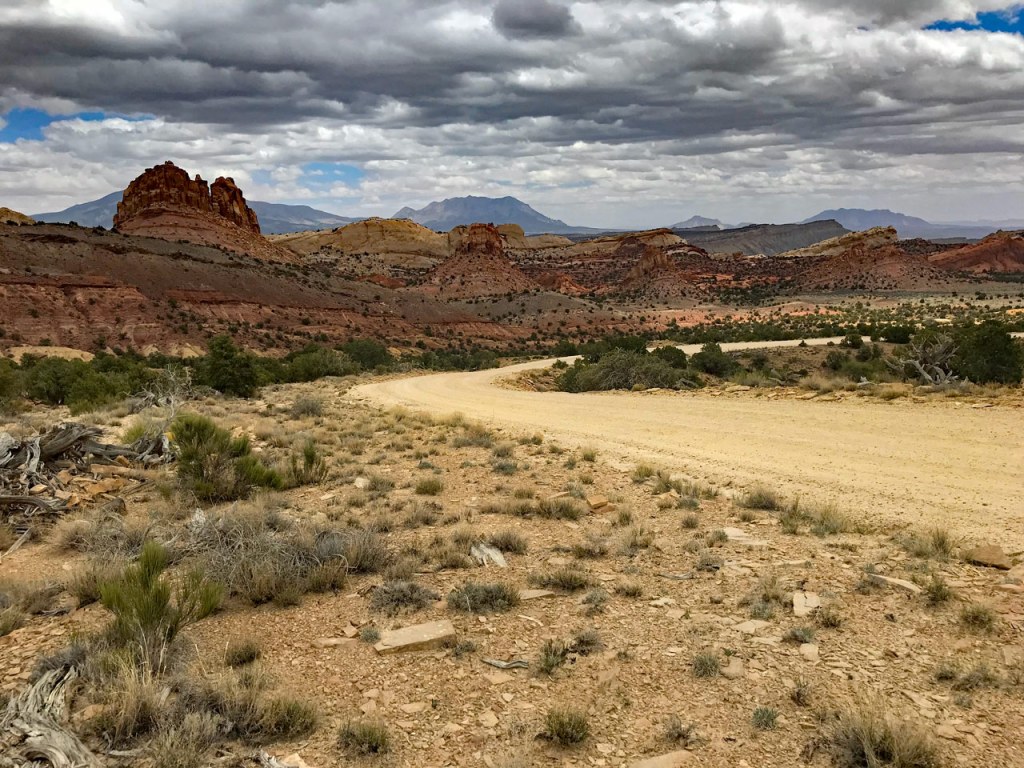 Along the road, there are lots of barberry trees in bloom. 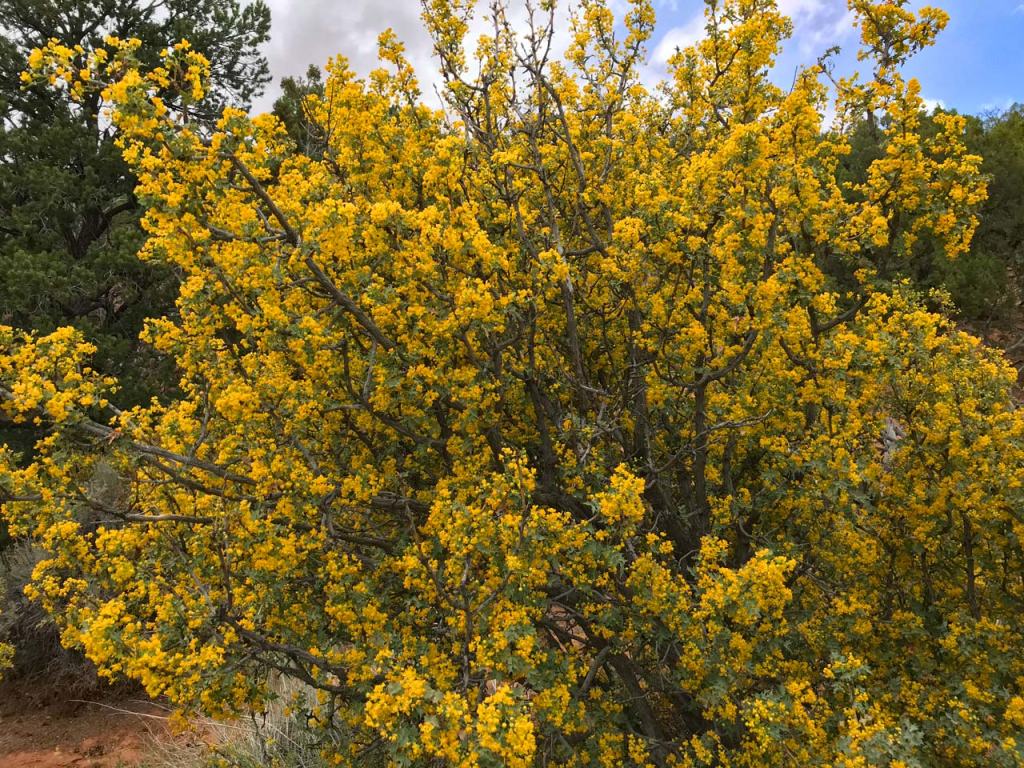 The return drive has a beautiful view of the pink cliffs. 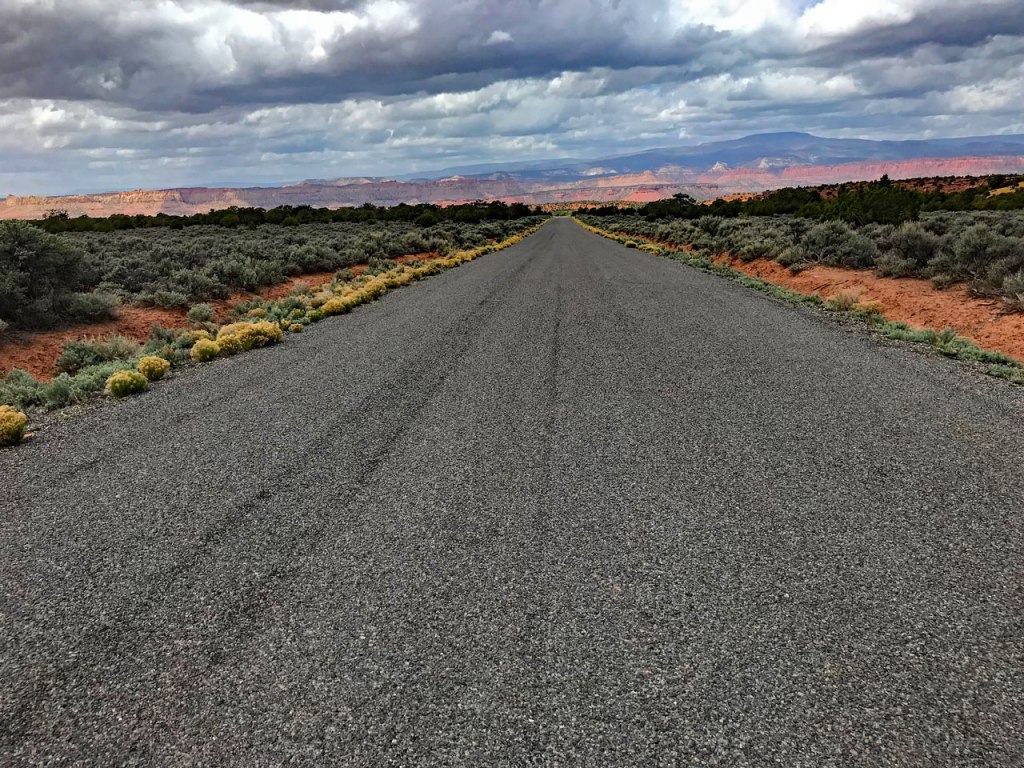 Pink cliffs of the GSENM

A little note on where Grand Staircase Escalante National Monument gets its name. It is named for the series of five lines of cliffs that begin at the Grand Canyon and rise to Bryce Canyon.  The cliffs, beginning at the south are called the Chocolate Cliffs, Vermillion Cliffs, White Cliffs, Grey Cliffs and Pink Cliffs.

I had planned to spend a couple more days here to do some hikes. However, I have an appointment in Grand Junction, CO on May 31. I want to spend a few days in Capitol Reef National Park, and then go to Moab to get settled into a campsite ahead of the Memorial Day holiday. It isn’t a good idea to be looking for a camp on a major holiday weekend!

I am at the Escalante visitors center writing this in real time. My plan right now is to leave Monday morning and drive to Torrey, UT. I’m not sure what the internet access will be there, will just have to see. So that’s my plan right now, but all plans are written in jello 🙂 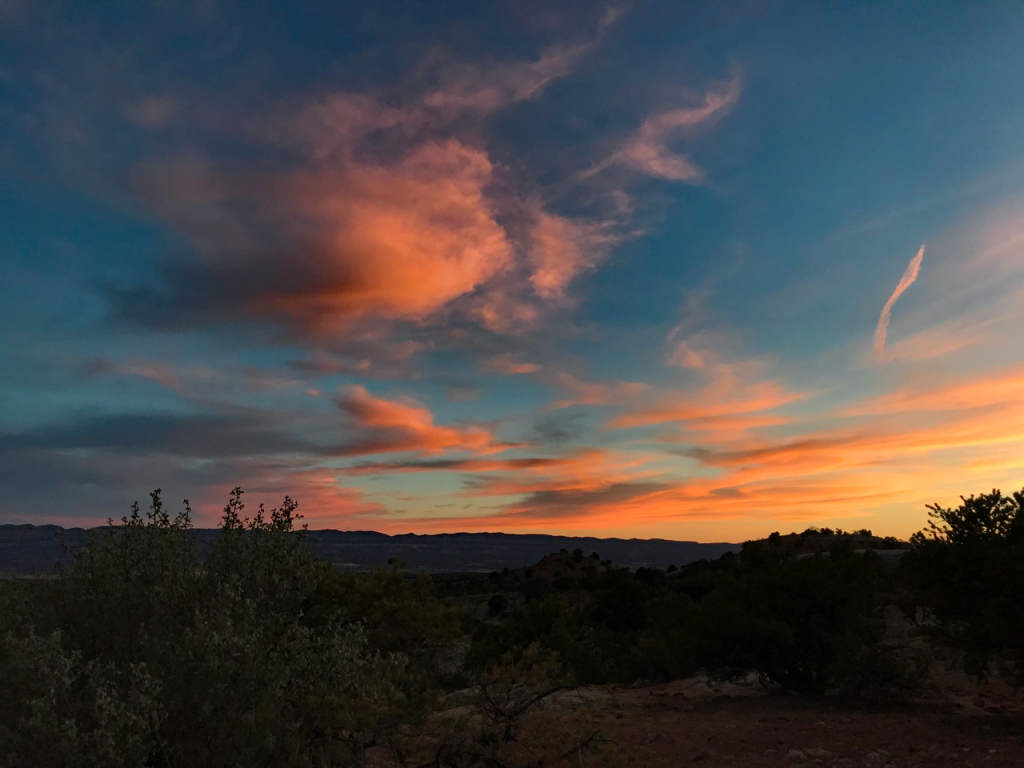 Sunset at my camp near Escalante, UT

2 Comments on “A Few Days in Escalante, Utah”