On to a camp with the most amazing view!

After finishing my business in Denver, I headed to Twin Lakes, near the city of Leadville. There is dispersed camping on the ridge overlooking the lakes and the surrounding mountains. This must surely be one of the best views ever; and when I arrived, the primo site was open. Wow!! 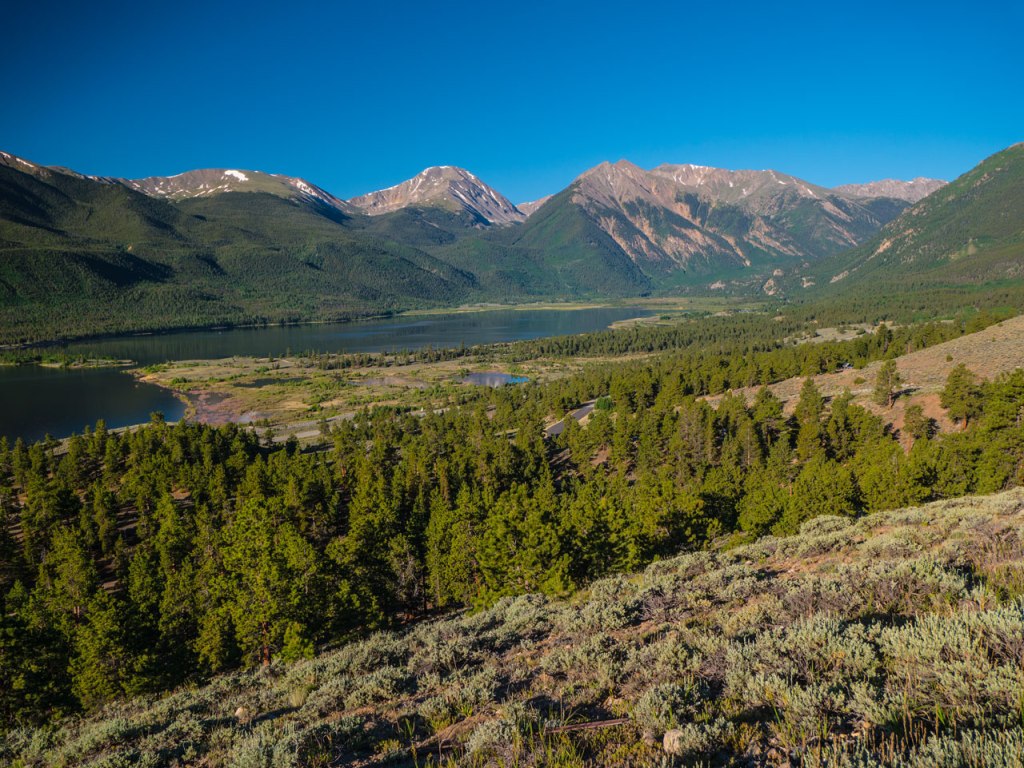 This is a panorama looking from the east around to Mt. Elbert in the northwest.

I have been using Photoshop Elements to process my images for a while. Right after a Windows 10 update installed, I was no longer able to work in this software. I would get insufficient memory errors when trying to save files. Apparently Windows is using a lot more RAM as I don’t know what else would cause this error. This happened just before I left Twin Lakes; so I planned to order more RAM when I arrived at my next location. But wouldn’t you know it, the Spring Fire burning to the south knocked out some Charter Communications infrastructure. Charter also carries the Verizon wireless signal in this part of Colorado. I had no cell service for several days. The library and other businesses in the area use Charter as their internet provider so their internet was also out. It was several days before I could order and receive the RAM and get my computer going again. As a result, I’m behind on getting this post out. This is really inconsequential though in view of the extent of the fires and loss of homes that has occurred – over 132 homes. The fire has burned in excess of 107,000 acres, making it currently the third largest wildfire in Colorado history.

June 28th marked one year since I hit the road! I had planned to make a post on that day, but was unable to with the technical issues.

The Twin Lakes are natural glacial lakes, however they have been enlarged by two dam projects.

Directly across the lake from me is the historic town site of Interlaken. 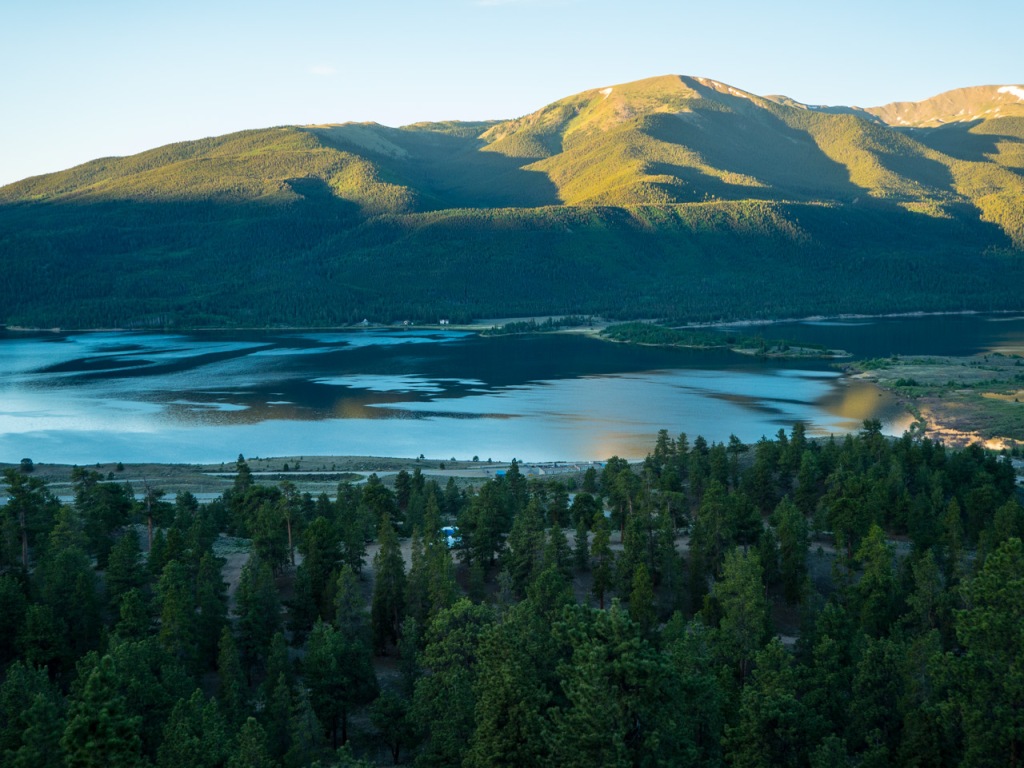 The buildings on the lakeshore are the Interlaken Resort

One day I hiked to the town site. It can be reached by hiking about 2 miles on the Colorado Trail along the south side of the lake, beginning near the dam. This was quite the resort area in the late 1800s to the early 20th century. However once the first dam was created to enlarge the lakes, the resort fell out of use. In the late 1970s, the Bureau of Reclamation began a project to preserve the buildings that remained in good enough condition. They also relocated the hotel, Dexter’s cabin and two granaries so they would not be inundated by the construction of a new dam and the Mt. Elbert Power Plant.

James Dexter purchased the resort in 1883. He expanded the facilities and also built his private cabin. This is one of the best preserved buildings and is open to visitors to tour the inside.

Both the exterior and interior have beautiful architectural details.

Even down to the door hinges…

The other preserved buildings include the Interlaken hotel, horse barn, granaries and cabin.

Horse barn and hotel in background

This makes for a nice day hike with an interesting destination.

One morning, my friends Joyce and Dorty picked me up to go to breakfast in Leadville. We met last year when I stayed at the RV Park in Buena Vista where they work for the season. We have become good friends and enjoy getting together when we can. 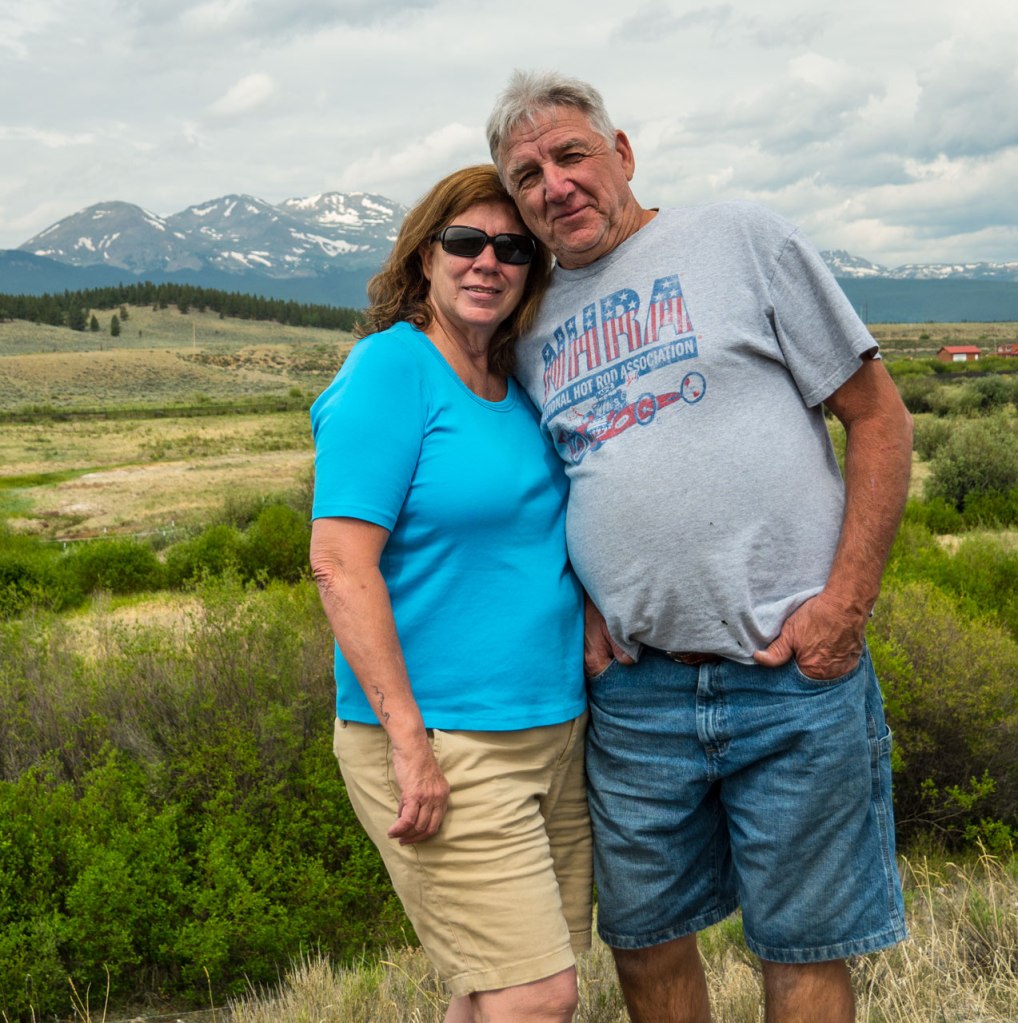 The headwaters of the Arkansas River are in the mountains to the west of Leadville. The upper Arkansas has been designated as Gold Medal Waters and is a popular trout fishing area. In 1821, the Arkansas was the boundary between the United States and Mexico. There is a marker designating this where the river crosses US Hwy 24 just south of Leadville.

When I was in Carbondale, I drove up Hwy 82 to Independence Pass from the Aspen side. Twin Lakes is on Hwy 82 which leads to the pass from the east side. One morning, I made the picturesque drive up the Lake Creek valley to the pass. 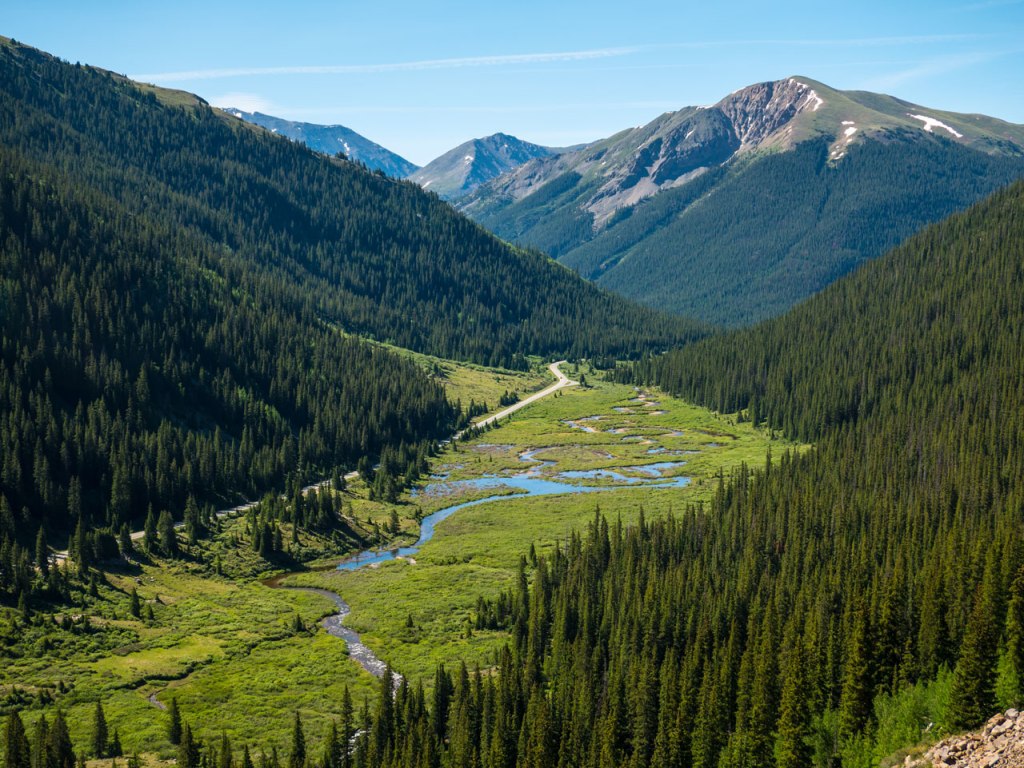 View of the Lake Creek Valley along Independence Pass Road

It was a beautiful morning on the pass.

Just over the pass is the Linkins Lake trail, which I wanted to hike. It is a short hike, about 1.2 miles round trip with only 600ft of elevation gain.

Creek at the beginning of the Linkins Lake Trail

The wildflowers seem to be blooming early this year. There were lots of flowers along the trail.

Parrys Primrose growing by the creek

A garden of Queens Crown

The lake is pretty, it was very windy up there though. 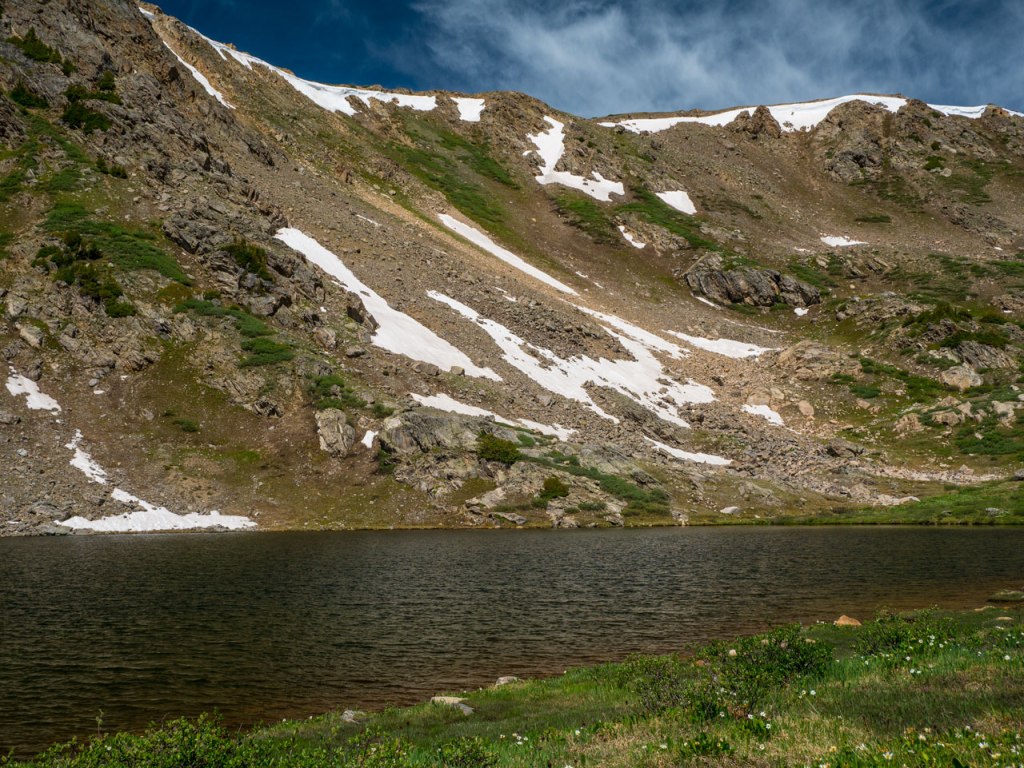 After having a snack at the lake I headed back down to the trail head. 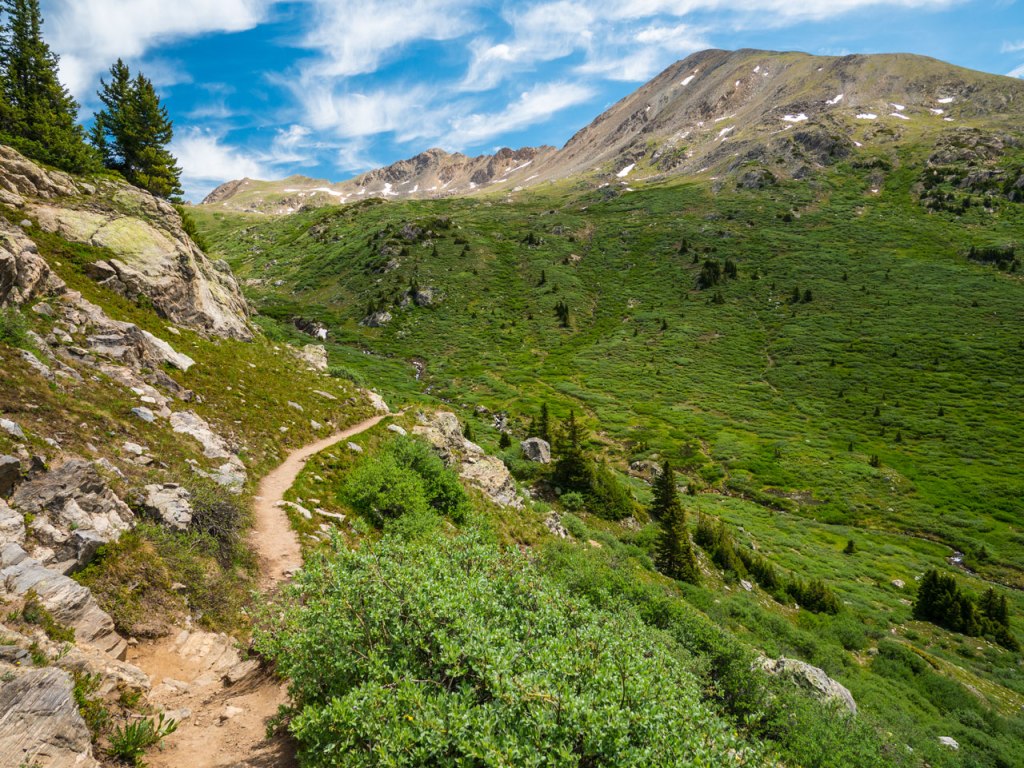 Looking down the trail towards the valley

This is a fairly short, easy hike to do when visiting the pass.

I spent twelve days here at Twin Lakes and it was wonderful. From here I drive about 50 miles south to the Salida area.

This is a camp I will want to return to! 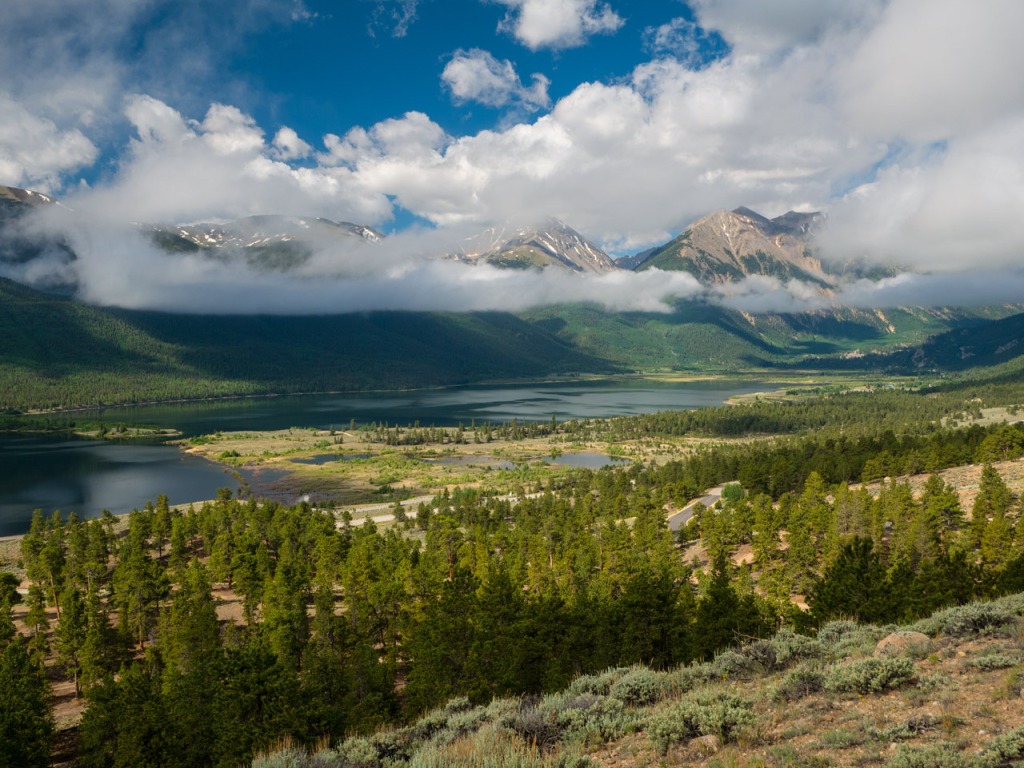 8 Comments on “On to a camp with the most amazing view!”