Posted on November 5, 2018 By debsrvtravels 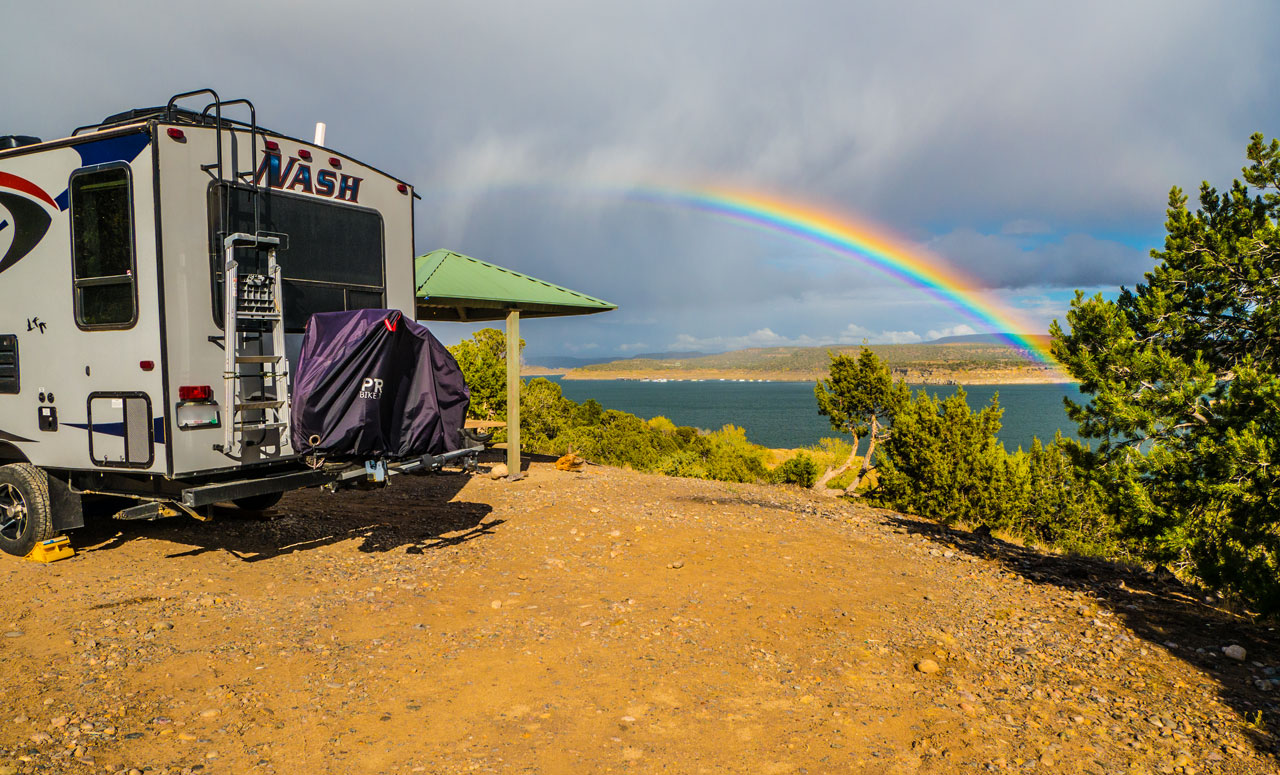 Monday morning, October 8, I finish breaking down camp and pull out of Sundance RV Park in Cortez. As I begin to move forward from the traffic light and make the right turn onto the highway, I hear this big thump and then a loud scraping noise. I get stopped, put on my emergency flashers, and jump out to see what happened.  Well I had my first towing mishap, which I have been dreading. Since I was staying at the same location for a month, I had removed the hitch from the receiver. I have only done that a couple of times. On Sunday in between rain showers, I was doing as much as I could to get ready to leave on Monday. When I put the hitch in the receiver, I obviously wasn’t paying close enough attention and did not put the pin in correctly. So the whole assembly pulled out of the receiver and dropped on the ground. Thankfully the safety chains did their job. But wow was that embarrassing. Two people stopped to help, for which I was extremely grateful. They had a floor jack which was able to jack up the trailer tongue far enough to get the stand on the tongue jack so everything could be raised up to the level of the receiver. Then we backed up the truck and slid the hitch back into the receiver. Everything looked okay, no damage. I hate to even write about this, but I feel like I should tell the good and the bad! I’m sure I’ll never make that exact same mistake again. But I also need to make sure I am totally focused when I’m connecting the truck and trailer. I hope nothing like that happens again!

After getting squared away, I continue on to my destination which is Navajo Lake State Park at Aztec, NM. The New Mexico state parks camping pass I purchased last fall is good through October 31, so I want to visit some of the parks as I work my way south. Hopefully the weather will cooperate with this plan. New Mexico is at higher elevations than Arizona, so it does get colder there. 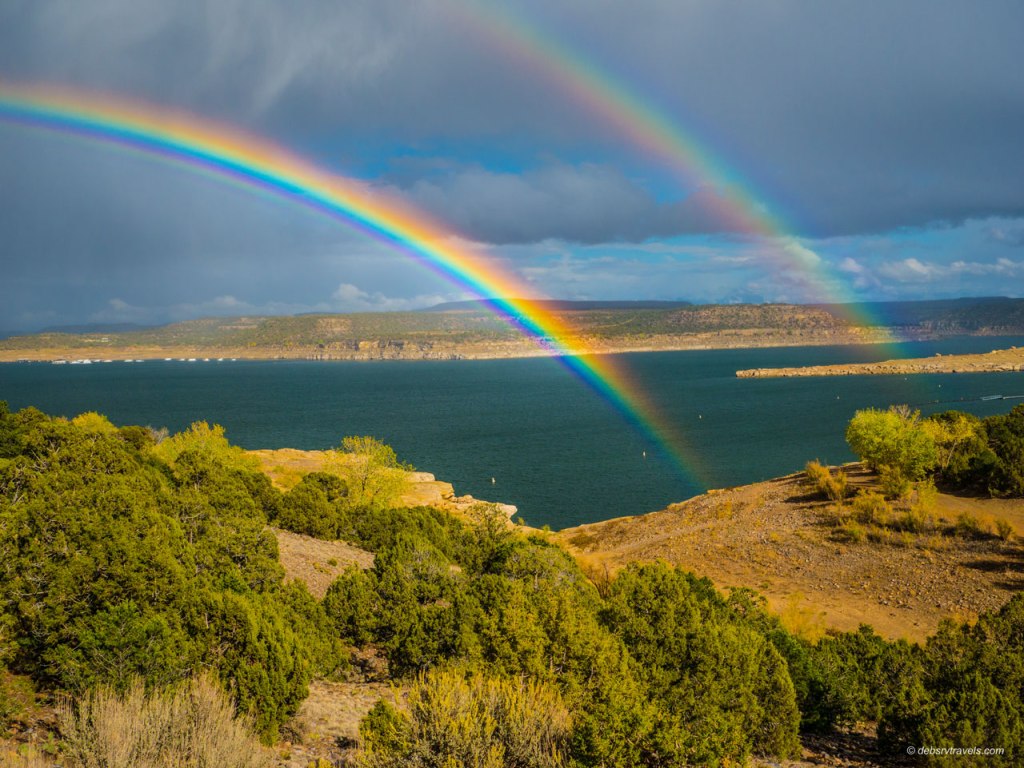 What an uplifting scene!

Around 3pm, I settle into site 67 which has a great view overlooking the lake. I am greeted by a gorgeous double rainbow. WOW! Later as the sun is setting the light is beautiful with the blue sky reflecting on the water.

View of lake from my campsite

Tuesday morning I drive into Aztec. The road follows along the San Juan River where there are several state park day use areas which are very popular fishing spots. The section of the river below the dam is a Gold Medal trout stream. The river is beautiful and the cottonwoods and other trees and shrubs are in their fall colors. 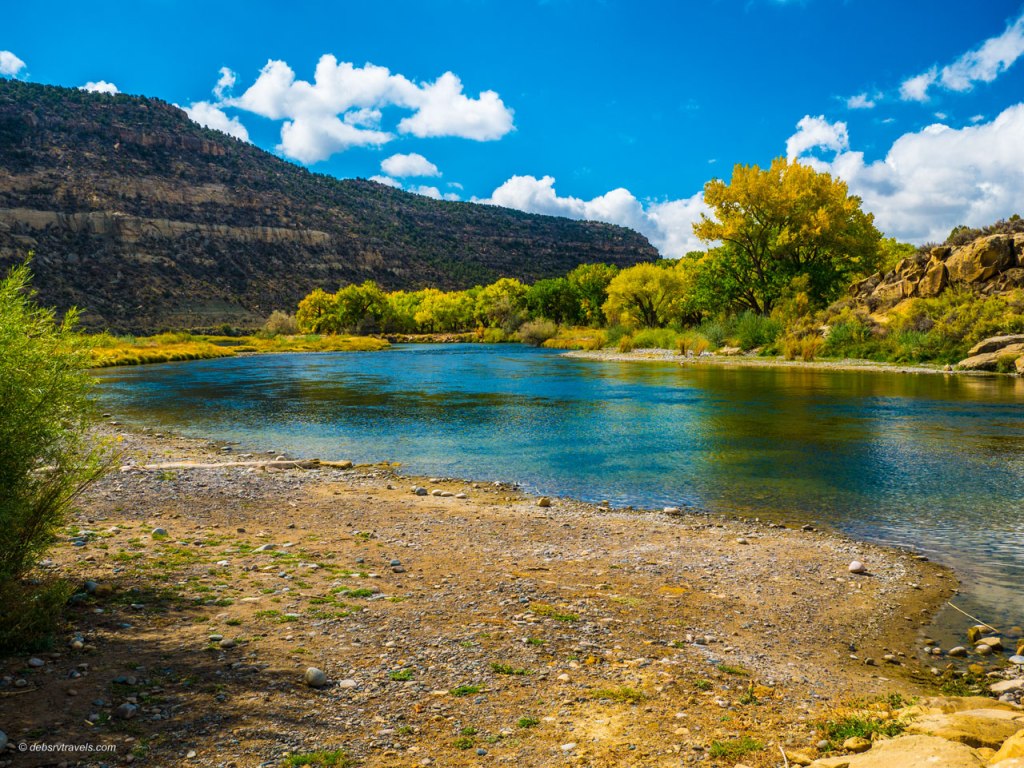 Love the reflections on the water

The primary reason I wanted to come to the city of Aztec is to visit Aztec Ruins National Monument, which is right in the city limits. It is one of the largest Puebloan ruins that has been excavated, having over 400 rooms. Construction of the pueblo began around 1100 AD and continued for decades. The pueblo was occupied until the late 1200s, when the pueblos in the Four Corners area were abandoned.

One of the most interesting things to see is the Great Kiva. The kiva was excavated and the lower part of the walls were still intact. It was reconstructed in 1934 using the same construction methods used in the original construction, and some of the original materials. There was a ranger program led by one of the park archaeologists while I was there. It was very interesting to hear about how the kiva as well as the rest of the pueblo was constructed.

Constructing the Great Kiva was quite an engineering feat considering the primitive tools that were available. There are four stone pillars supporting the massive roof, which weighs about 93 tons. To prevent subsidence in the sandy soil, each pillar was built on a base of four large limestone discs. Limestone is not available in this area, so it had to be transported in from a long distance. These people did not have the wheel or large domesticated animals, so everything had to be carried manually.

Also within the pillars, there are alternating layers of round wooden poles and stone. The wood allows for movement and compression of the columns. Also look at the construction of the roof. The original logs were used in the reconstruction. The large logs are providing structural support. Then a layer of smaller logs are laid across the large logs. On top of that was placed strips of bark or other small wood, then it was sealed with adobe. This is really quite an impressive structure and in itself is well worth a visit to the park (which doesn’t have an entry fee by the way). 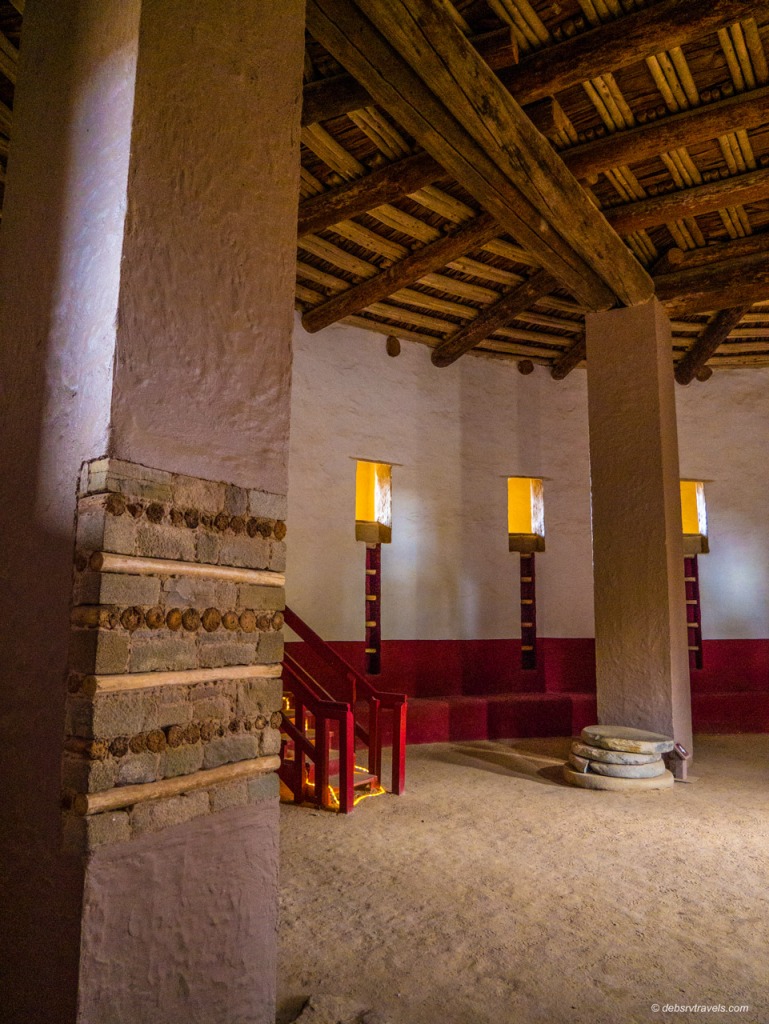 Notice construction of pillars and roof

Adjacent to the Great Kiva is a smaller kiva that has been excavated, but not rebuilt. Ninety percent of the pueblo is original construction. The Great Kiva makes up most of the remaining ten percent that is not original.

Many of the structures were three stories tall. Looking at the photo below, you can see the third story in the upper left corner. In front of that the walls above ground are part of the second story. The first level has not been excavated. 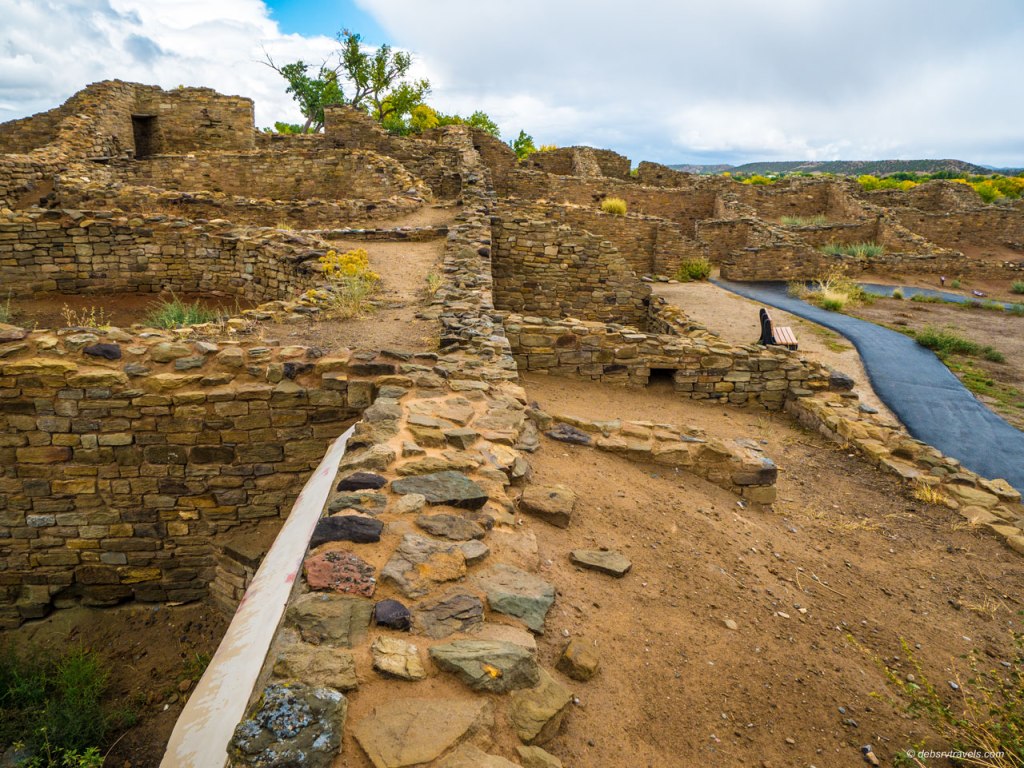 East section of the pueblo

Looking at the photo below, in the front room the beams jutting from the wall would be the floor support for the level above.

Much care was taken in the construction. As long as a decade would be spent stockpiling materials prior to beginning construction on a new section. This was quite an undertaking as the logs and other materials had to be transported in from long distances.

These are the original doorways which go back through three rooms.  They are about four feet high.

There are several rooms which visitors are permitted to enter. In the photo below, the roof is original. It shows the same construction method that was used in the Great Kiva.

In this photo, the wood screen is original. The room behind is collapsed and hasn’t been excavated. On the floor there are several grinding stones that were used to grind corn. The Puebloans primarily grew corn, beans and squash. 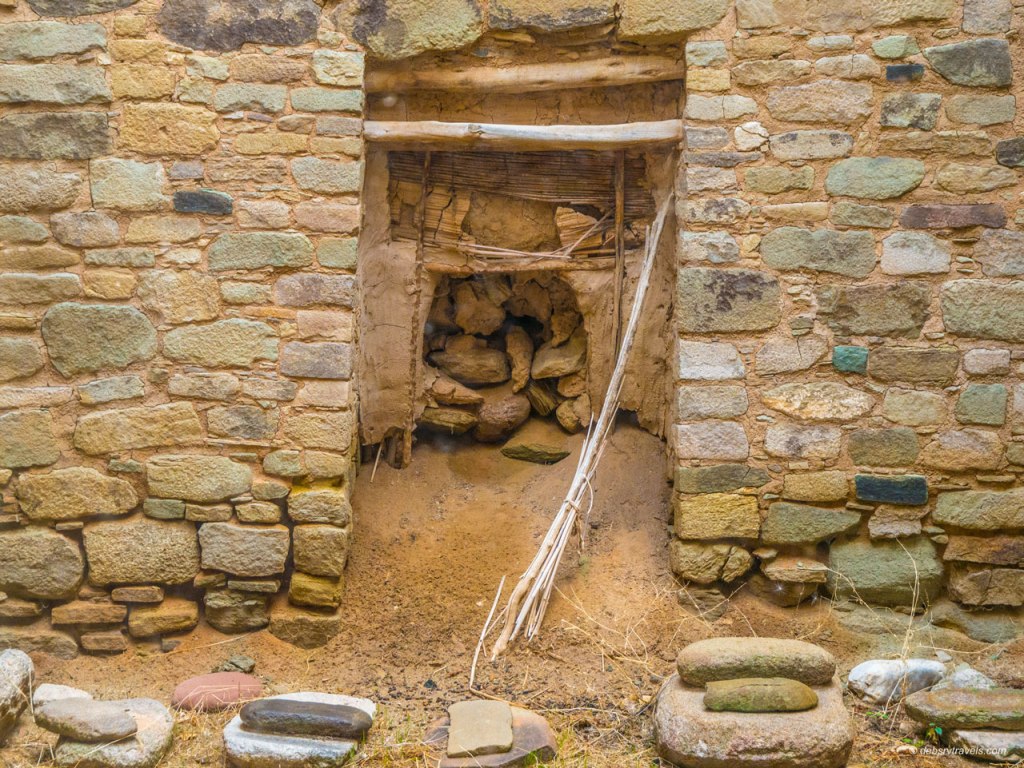 Aztec Ruins National Monuments doesn’t receive as much publicity as some of the other locations such as Chaco Canyon and Mesa Verde. I was quite impressed with it and am glad I visited.

Tuesday’s sunset was very dramatic with great lighting on the cliffs across the lake and spectacular color in the clouds. 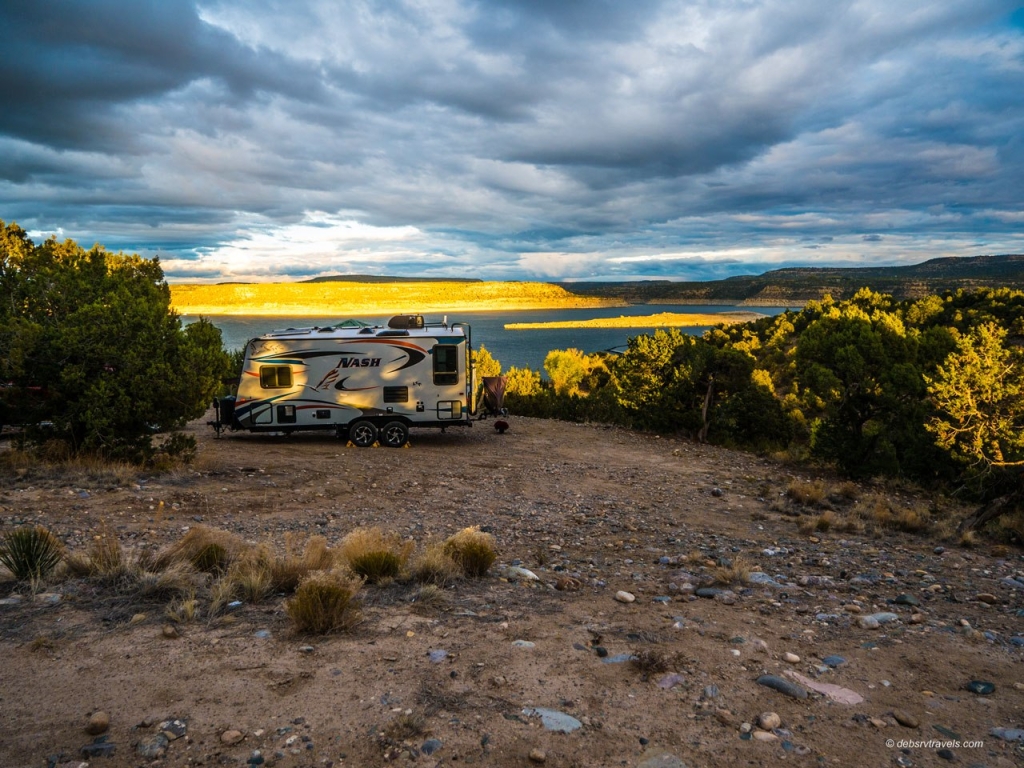 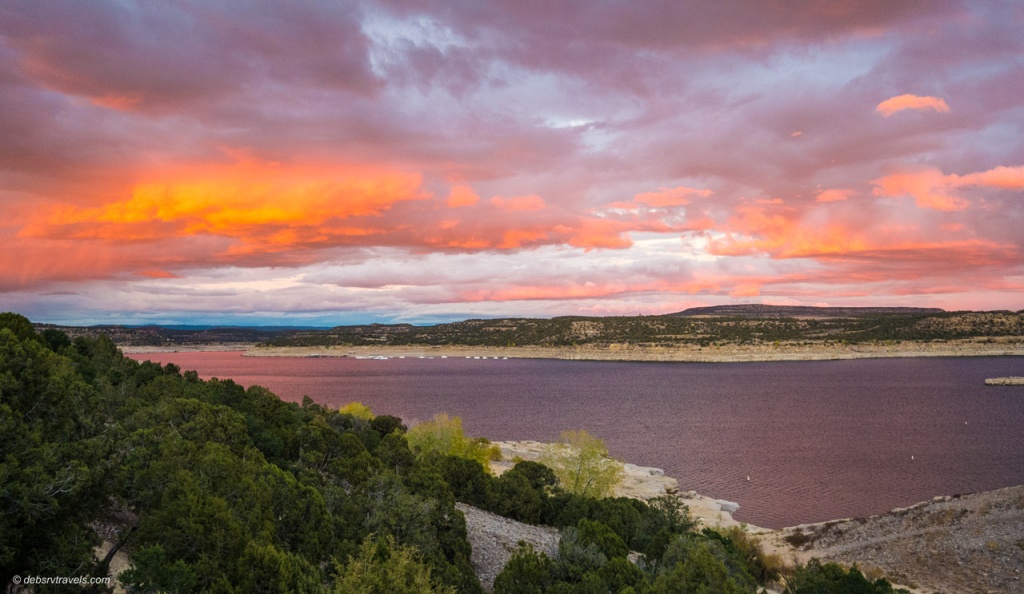 The weather forecast for the next few days shows lows in the 30s, highs in 40s. This prompts me to head further south. I have been having trouble with my phone. I had to replace the screen last January and for the last several weeks it has been freezing up. When it freezes, I have to power it off and then back on to get it to work. However Tuesday night I power it off and when it came back on the screen was still frozen and I couldn’t enter my passcode to unlock the phone. It is my only source of phone or internet so I’m kind of lost without it.

Wednesday morning I break camp and drive in to Aztec so I can connect to wifi at the library with my iPad. I find a cell phone repair place in Farmington that’s about ten miles away. I head over there to get my iPhone fixed. Tuesday night I had tried to do a hard reset, but Apple changed how you do that with the iPhone 7 and I couldn’t remember how. I should have googled that when I was at the library but didn’t think of it. The guy at the repair place did a hard reset and the phone worked again. At least for now! I’m thinking I should get another phone as a backup. I get back on the road heading south down past Albuquerque on I-25

One of the more popular state parks is Elephant Butte Lake near the city of Truth or Consequences. I read that the lake is the largest in New Mexico. It is now at less than fifty percent capacity and isn’t the size it once was. There was only one campsite available overlooking the lake. Wednesday through Friday are very overcast, windy, and cold. Saturday there was finally some sunshine, and I get some photos of the campsite and lake. 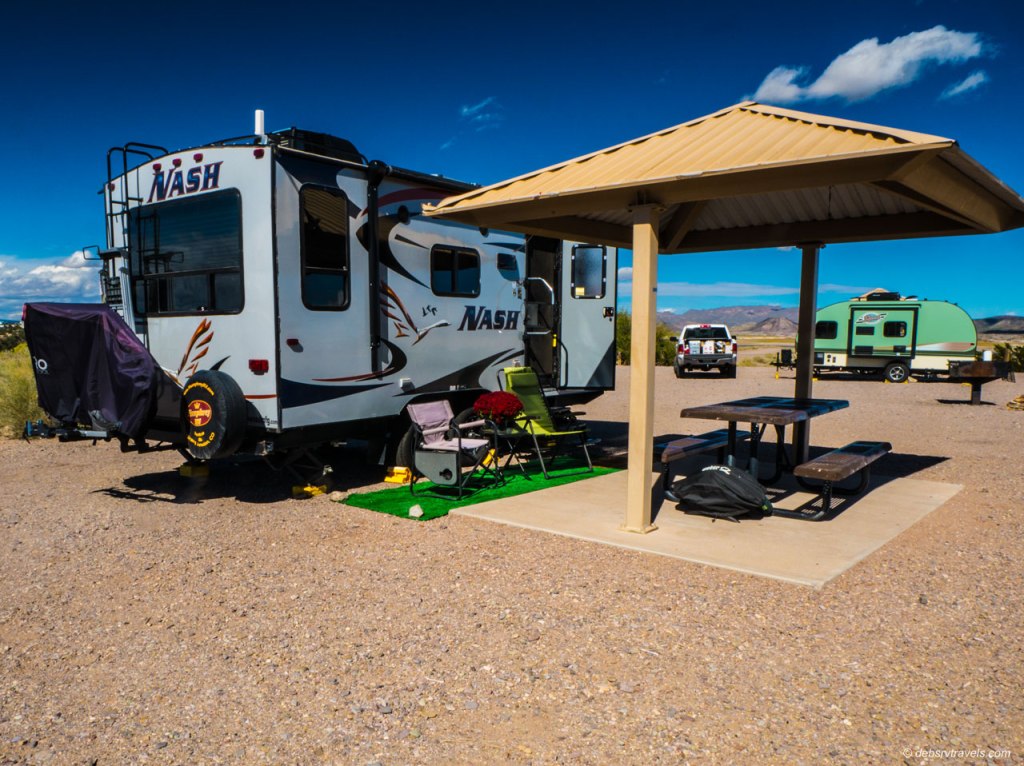 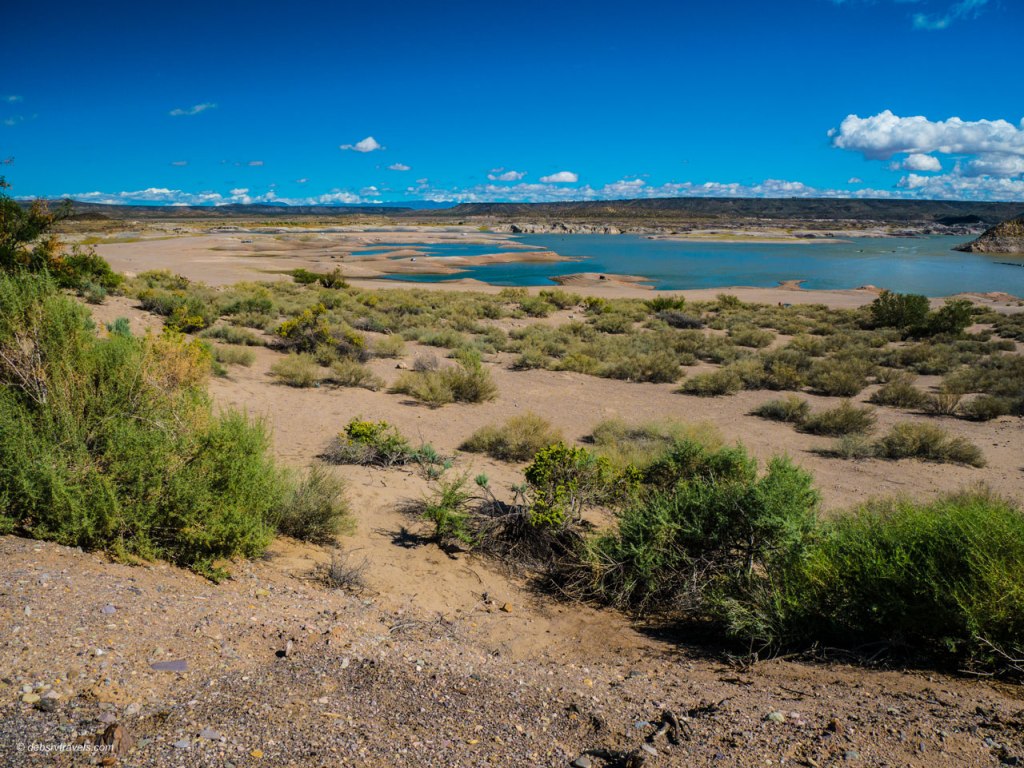 The water level is really low 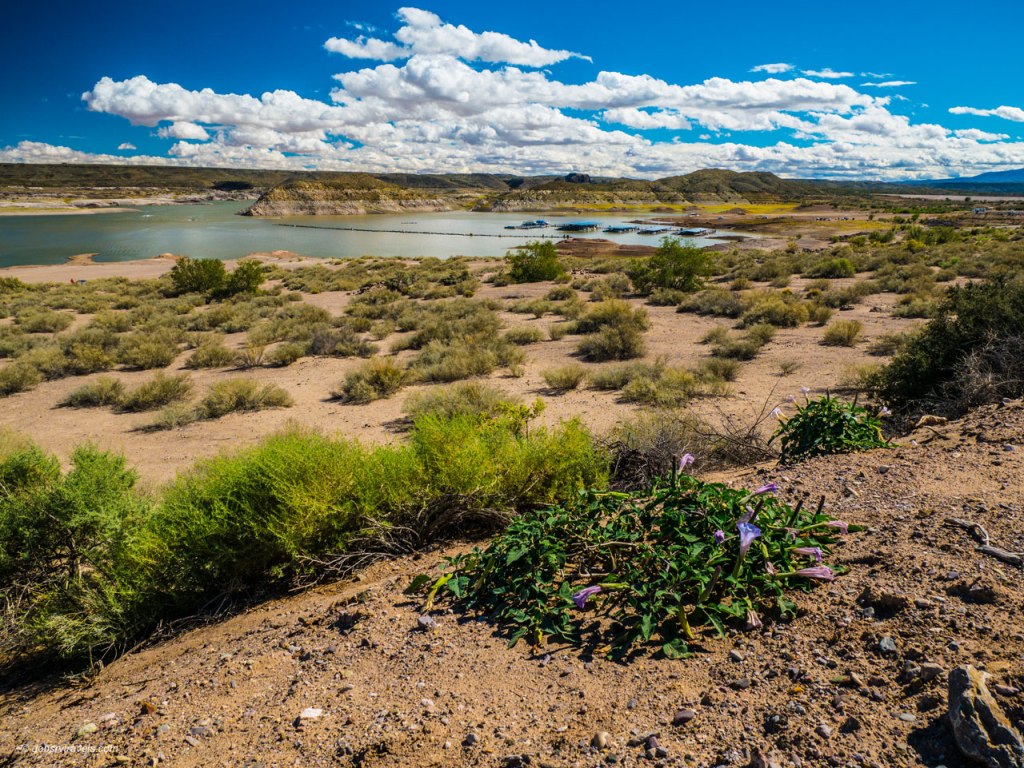 The couple in the rPod next to me were from Saskatchewan. They left on Sunday and I moved over to that site. That gave me a little more privacy and my back window faced the lake.

One of the main attractions in T or C is the Geronimo Springs Museum. Since it was raining on Friday that was a good day to do something indoors. 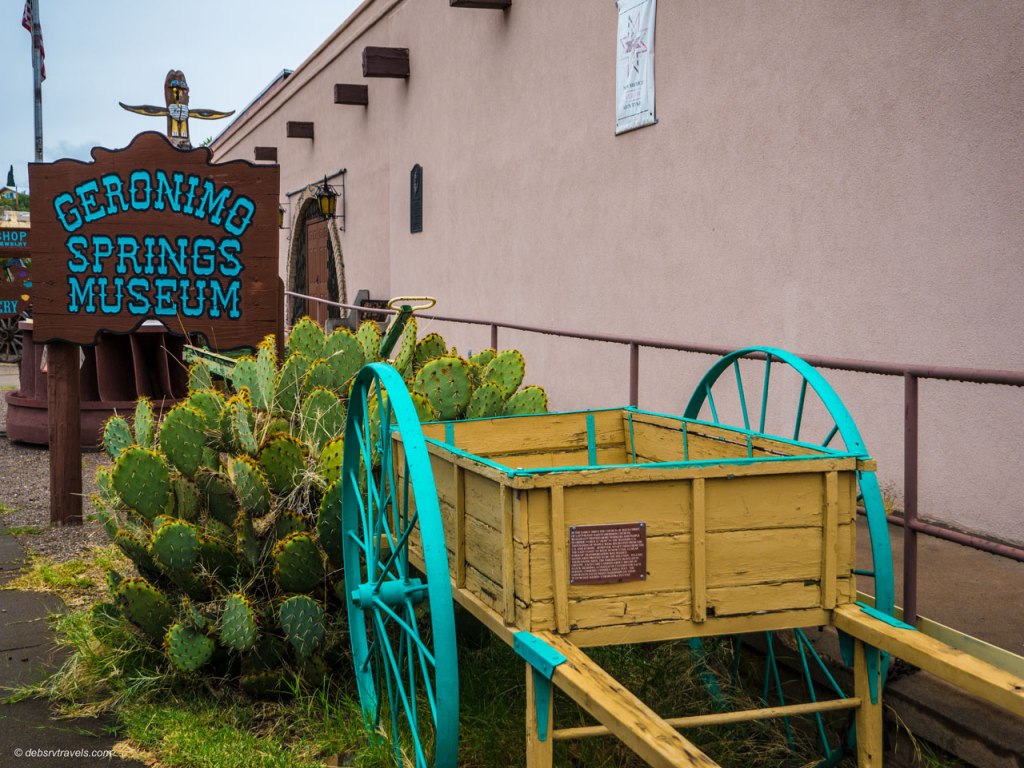 displat in front of museum

This display tells the story of how the town came to be named Truth or Consequences.

The museum had exhibits on Geronimo and the Apaches, some of the archaeological finds in the area, the pioneer immigrants, and the ancient indigenous peoples and Puebloans. 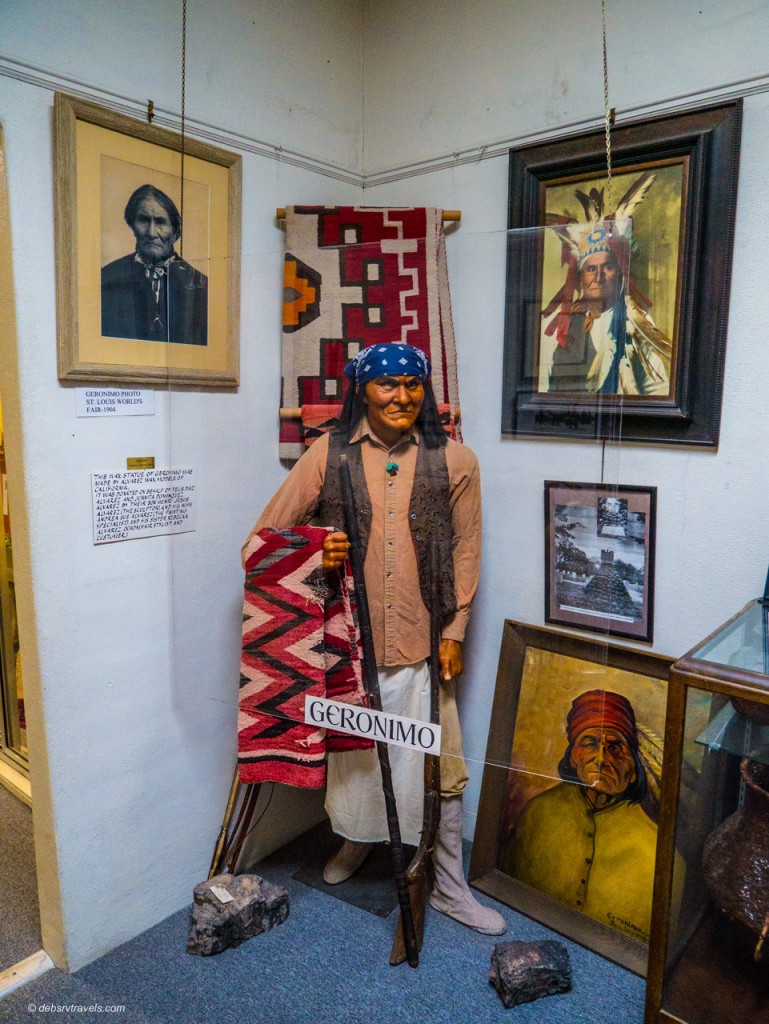 This room focuses on Geronimo and Apache history 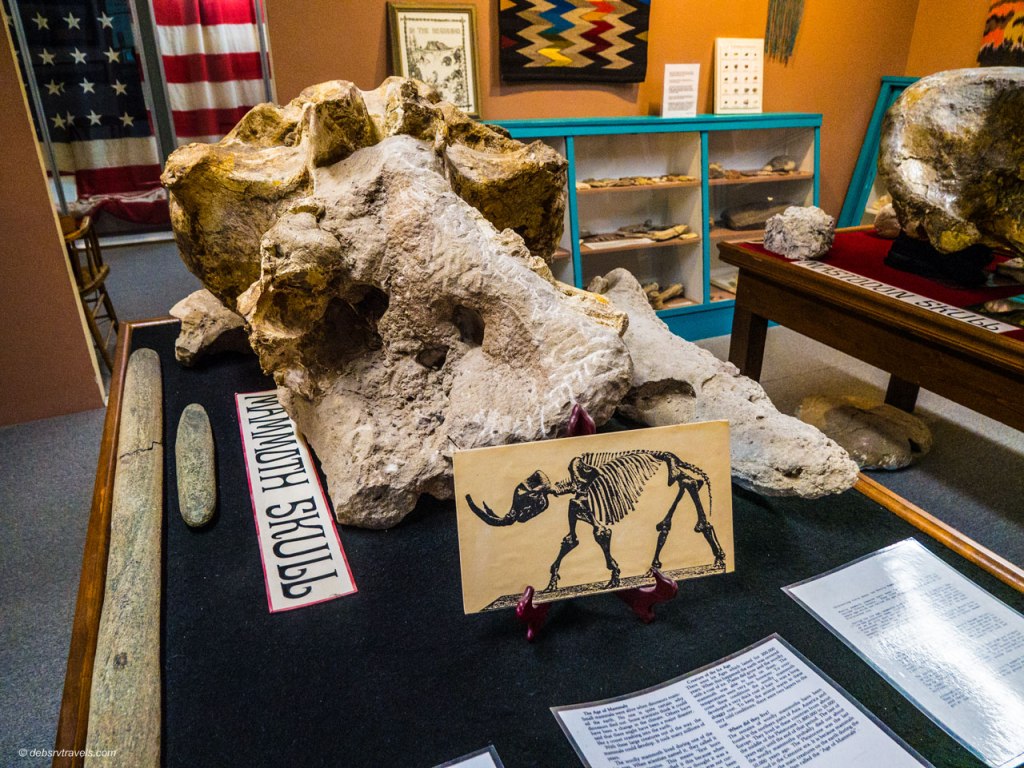 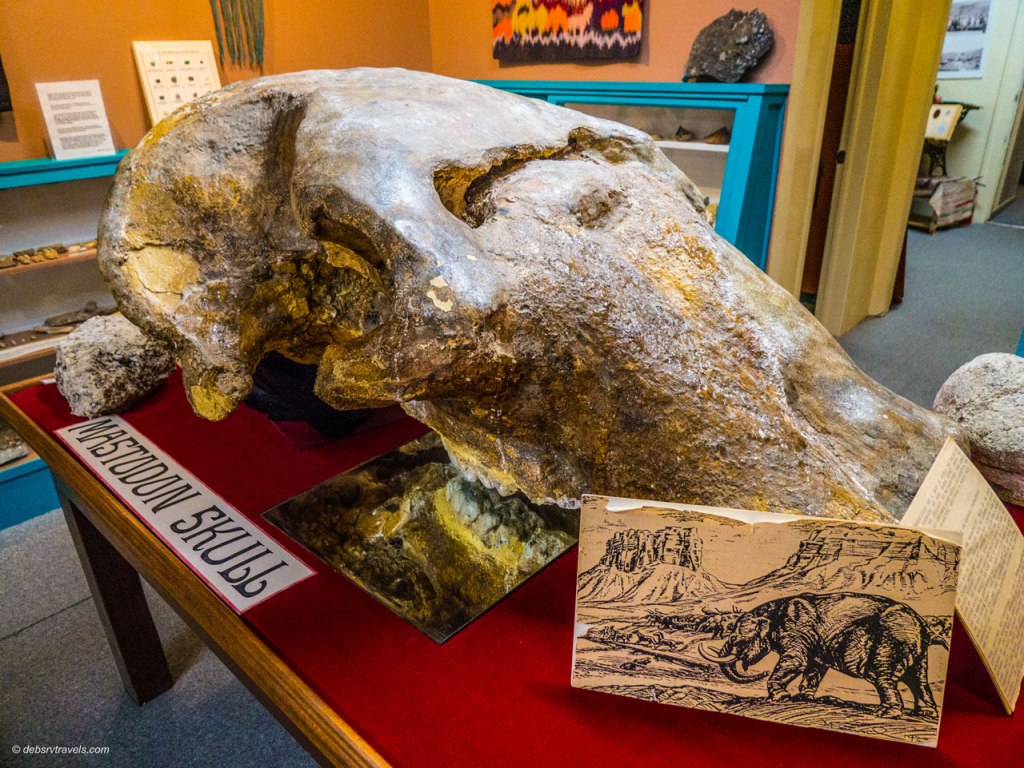 I was impressed with the wealth of pottery on display. This photo only shows about a quarter of a long display spanning several centuries. 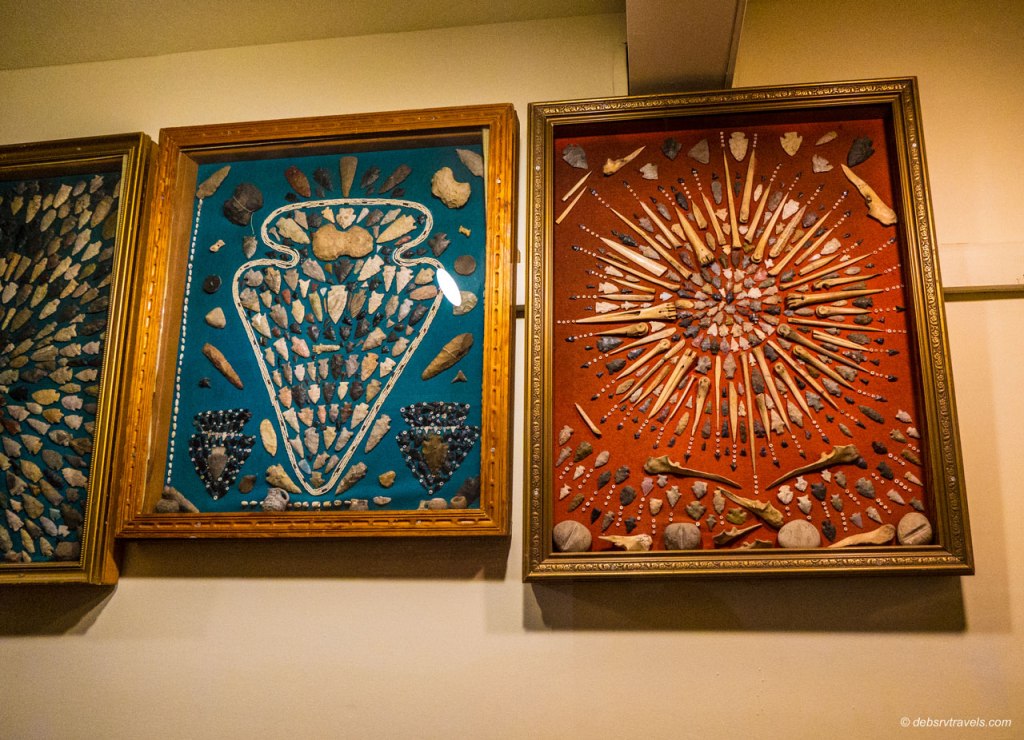 On site is also an old mountain cabin that was disassembled and reconstructed on the museum site. 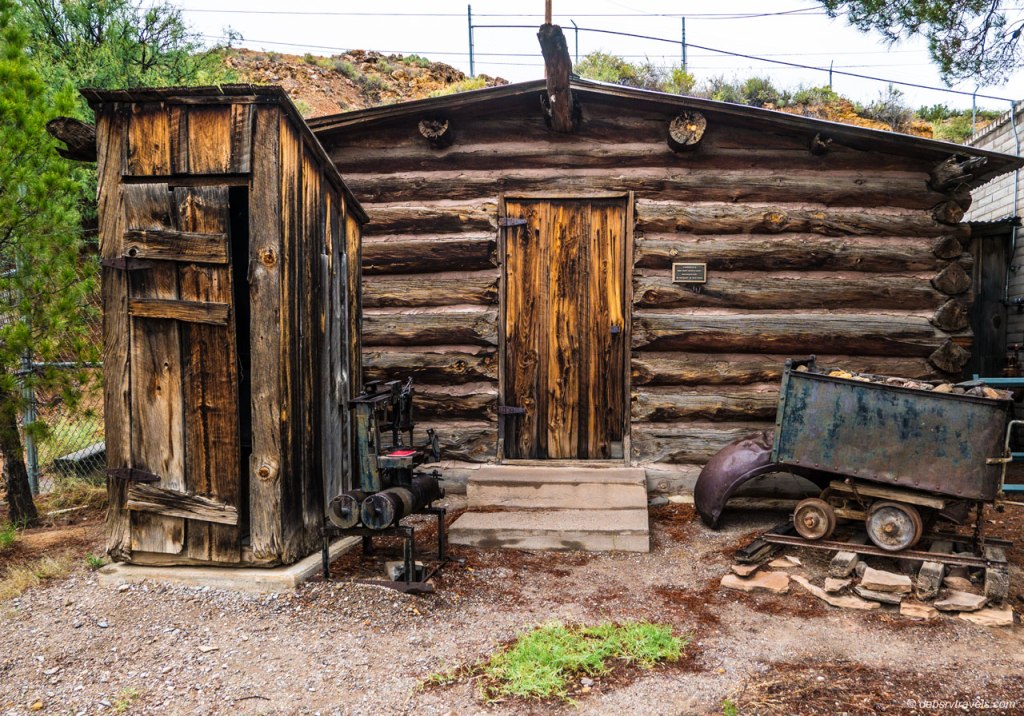 This old sewing machine was cool

I enjoy visiting small town museums and this one was no exception. The exhibits were excellent, and I enjoyed learning about the local history.

Saturday was the one nice day I had, then on Sunday it turned cloudy again. Both Arizona and New Mexico were getting above average rainfall from the remnants of hurricanes that were moving through.

While I was here large flocks of Sandhill cranes began flying overhead. I would hear them honking as they flew over. Sometimes they would be in an unorganized group as in the photo below.

Then within a few seconds they would organize themselves into v-shaped groups and fly on south. It was cool to watch them.

I wanted to stay at Elephant Butte through 10/21 so I could visit the Very Large Array and the National Radio Observatory up near Socorro. They have inside tours on the first and third Saturdays of the month. However it continued to be cold, windy and overcast. It was so overcast that for the first time I had to restrict my electrical usage to a minimum so my batteries would stay charged. I could have moved to an electric site in the campground. But after spending a month in the RV park, I just didn’t want to be jammed in next to everyone else. From here I hope to catch a couple more parks through the end of the month.

But by the end of the week with no improvement in sight for the weather, I finally throw in the towel and decide to move on to Arizona. I’ll have to try New Mexico another time and earlier in the fall or in the spring. On Friday morning, October 19, I depart Elephant Butte bound for Arizona.

Arizona isn’t the only state with beautiful sunsets!

6 Comments on “South Through New Mexico”