Posted on October 3, 2019 By debsrvtravels

The valley floor is protected from high density development and remains largely ranchland. Main Street dead ends at a bluff overlooking the valley and Sangre de Cristos; it is a stunning view.

Prior to the festival, I spent a couple nights at Alvarado Campground in the San Isabel National Forest. With the exceptional snowfall this winter and the wet spring the mountains were the greenest I have seen them in the ten years I have been coming here. And there were a lot of flowers in bloom. 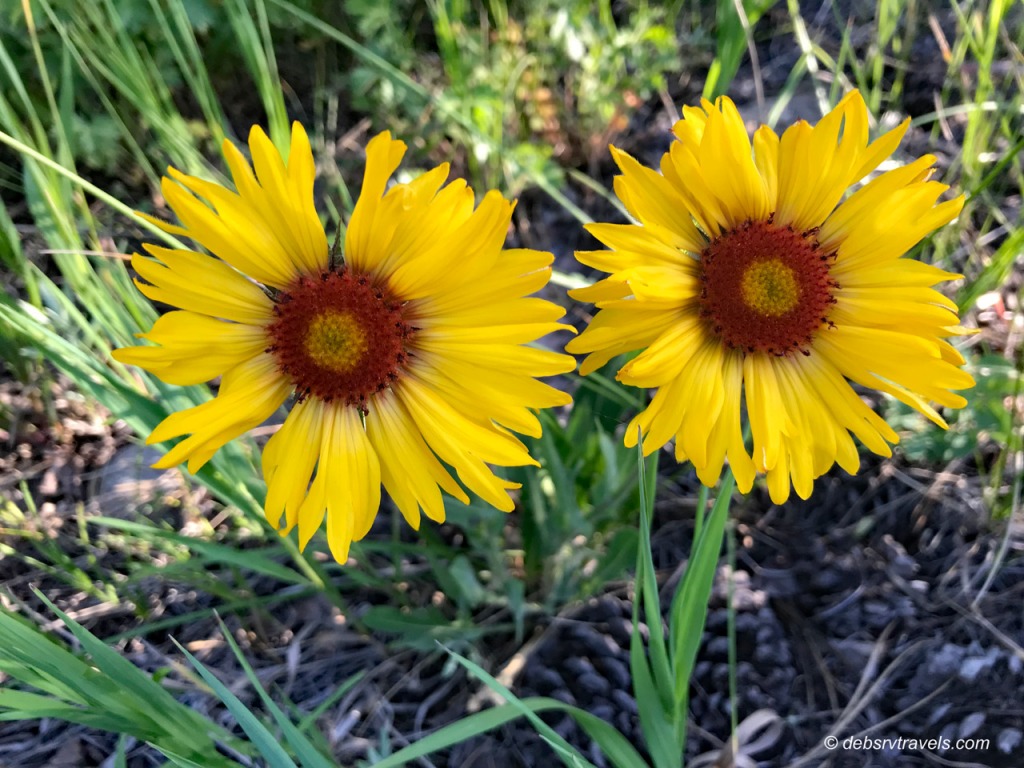 A penstemon, I believe

…and another yellow flower 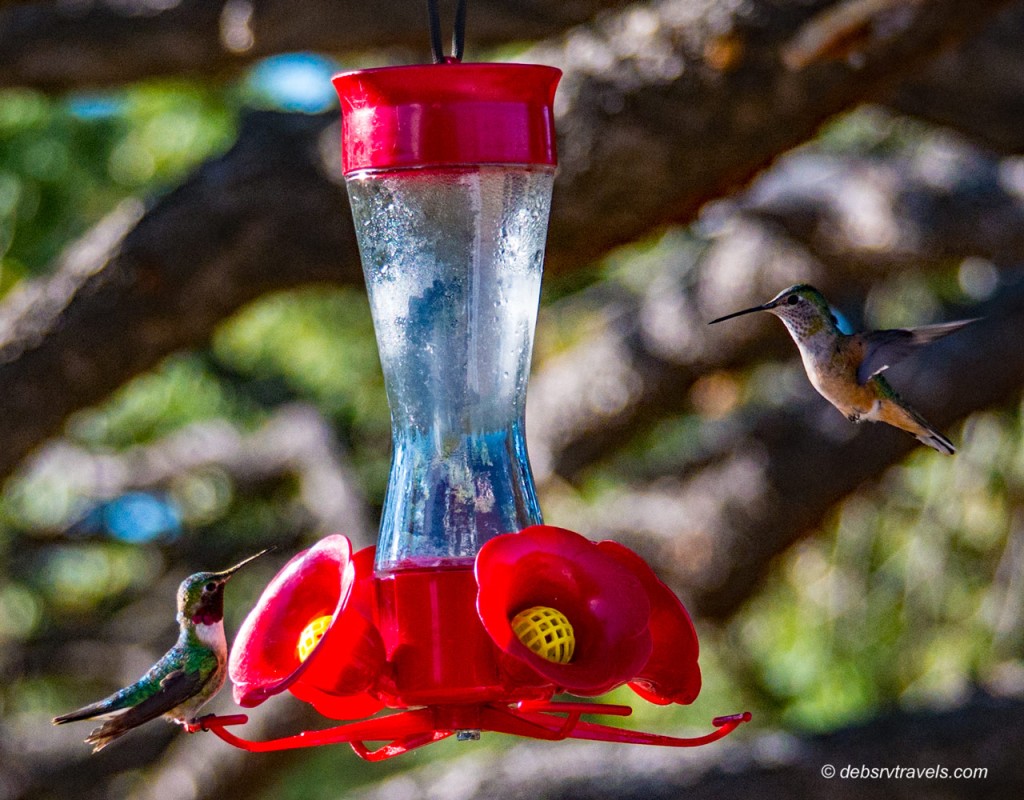 A pair of Broad-tailed hummingbirds

And the first male Rufous hummer I had seen this year also visited. I love these guys. They are so tiny, about 3 inches in length and weighing one-tenth of an ounce. They are the most territorial hummingbird. When I was in Cave Creek Canyon last spring, the Rufous hummers would aggressively chase away Rivoli’s and Blue-throated hummers which are 5 to 5.5 inches in length and three times the Rufous’ weight!

This male Rufous staked out my nectar feeder as his territory. He would stand guard on a nearby branch, swooping down to chase away any other hummingbird that approached. 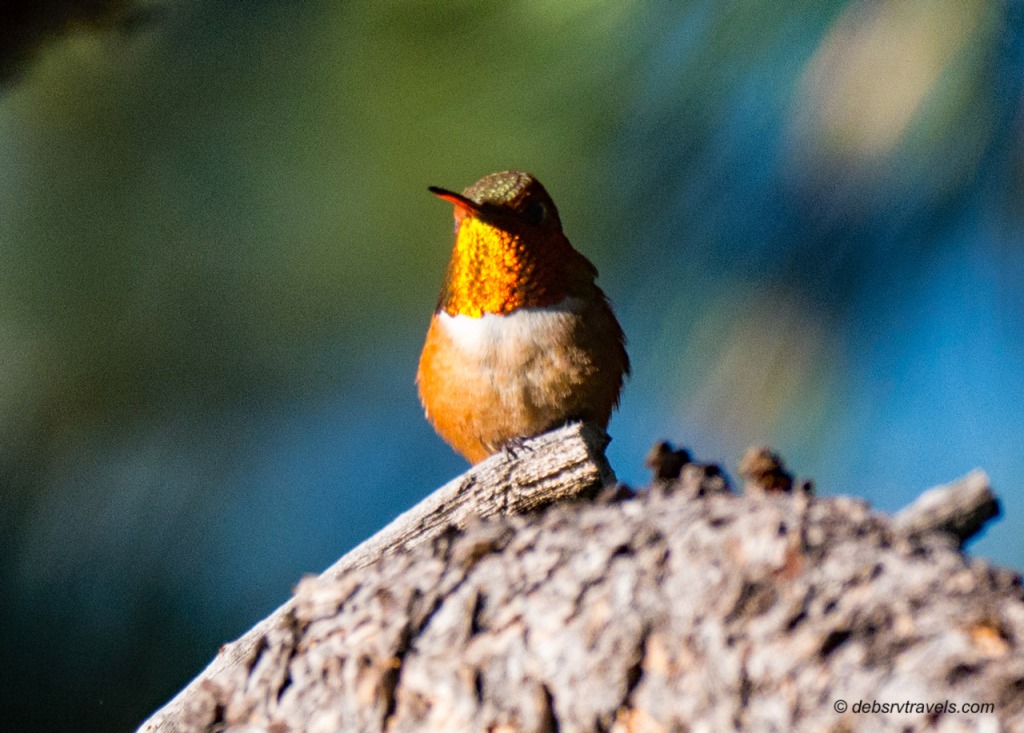 …and that way for any interlopers 🙂 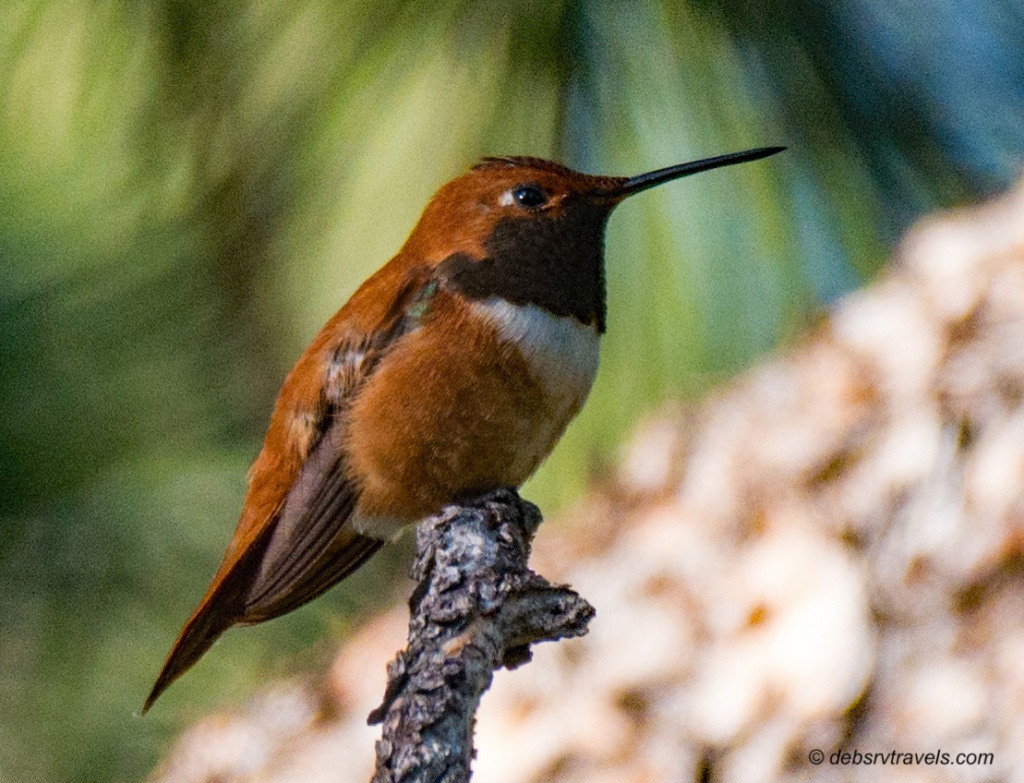 He looks ready to take a nap.

The Rufous makes one of the longest migrations relative to body size of any bird in the world. In the spring, it leaves Mexico and travels as far north as southeastern Alaska – a one-way journey of about 3,900 miles. That’s pretty amazing. This information is from the All About Birds website, which you can visit for more info on this fascinating bird.

All About Birds – Rufous Hummingbird

It seemed like he spent more time guarding than eating!

One day I took an exploratory drive around the valley. One of my stops was the historic Beckwith Ranch, established in 1874. 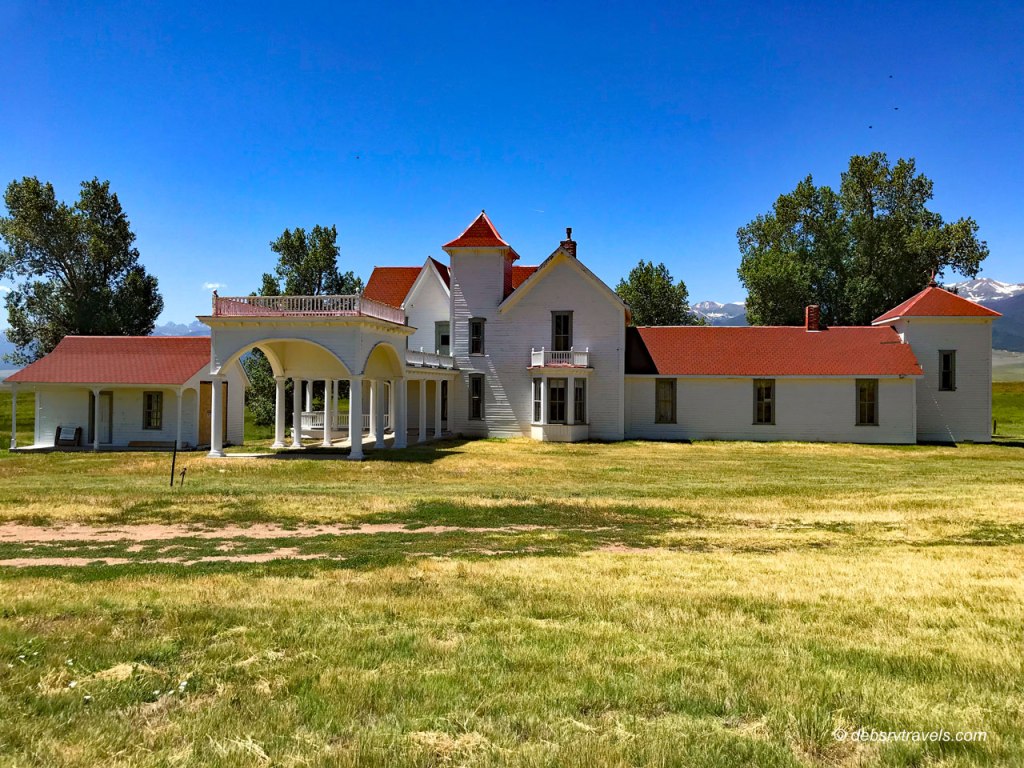 The property is now owned by a non-profit organization and undergoing renovations as funds are available. The several buildings are not currently open to the public. I stopped to see what birds I might find, and was excited to see a pair of American Kestrels with a nest with young in one of the trees on the property. The American Kestrel is North America’s smallest falcon. Kestrels nest in cavities, but don’t have the ability to excavate their own. So they rely on existing woodpecker holes, natural tree hollows, etc. The male and female were both hunting in the fields around the buildings. They primarily eat insects, as well as small rodents and birds. Kestrels are the most common falcon, however studies show their population declined by about 50% from 1966 to 2015. The decline is attributed to clearing of land and felling dead trees, as well as reduction of their food supply due to widespread use of pesticides. For more info, visit

All About Birds – American Kestrel

I also saw a few pronghorn during the day.

On Thursday, the 11th I moved to the festival grounds. This is my favorite music festival and I enjoy attending each year. It is great to reconnect with friends I have made over the years; and one couldn’t ask for a better setting for the event. The music begins Thursday evening and continues through Sunday afternoon.

Monday the 15th, I left Westcliffe and traveled to Brown’s Creek dispersed camping area which is near Buena Vista. I was camped in a nice Ponderosa pine forest. This Abert’s Squirrel was around my camp several mornings.

This was a great year for waterfall hikes in Colorado. I was camped near the trailhead for Browns Creek Falls and hiked up to the falls one day. 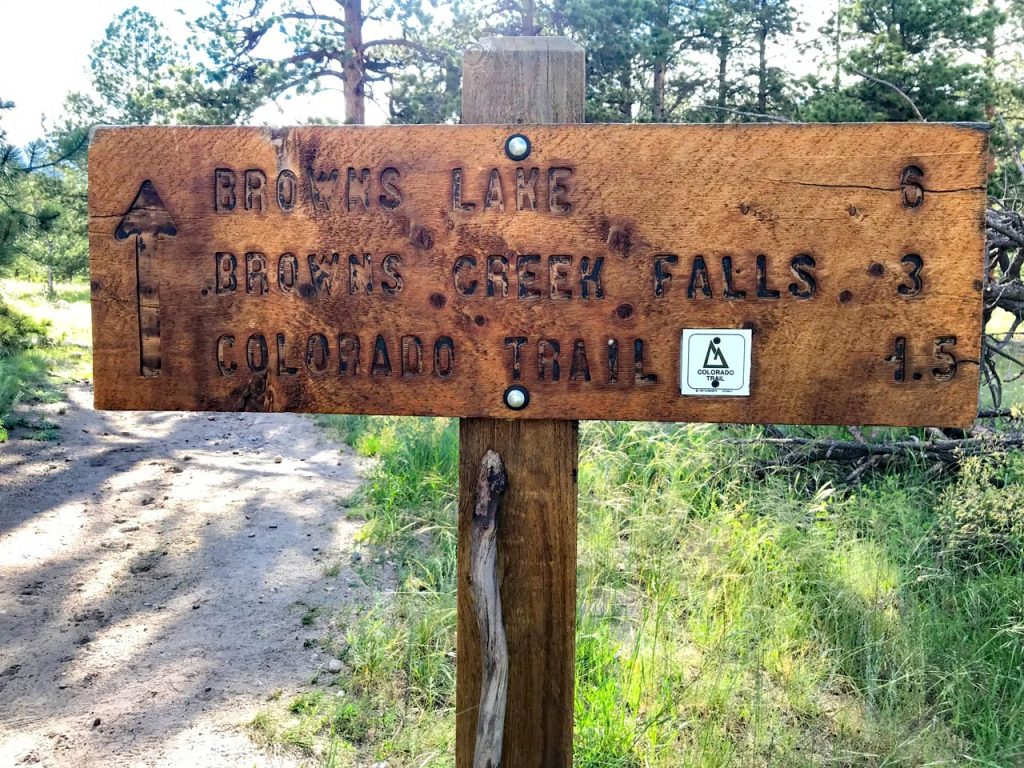 The first mile or so climbs up to the Colorado Trail

There were four creek crossings; all except the first had some type of foot log bridge to cross on. 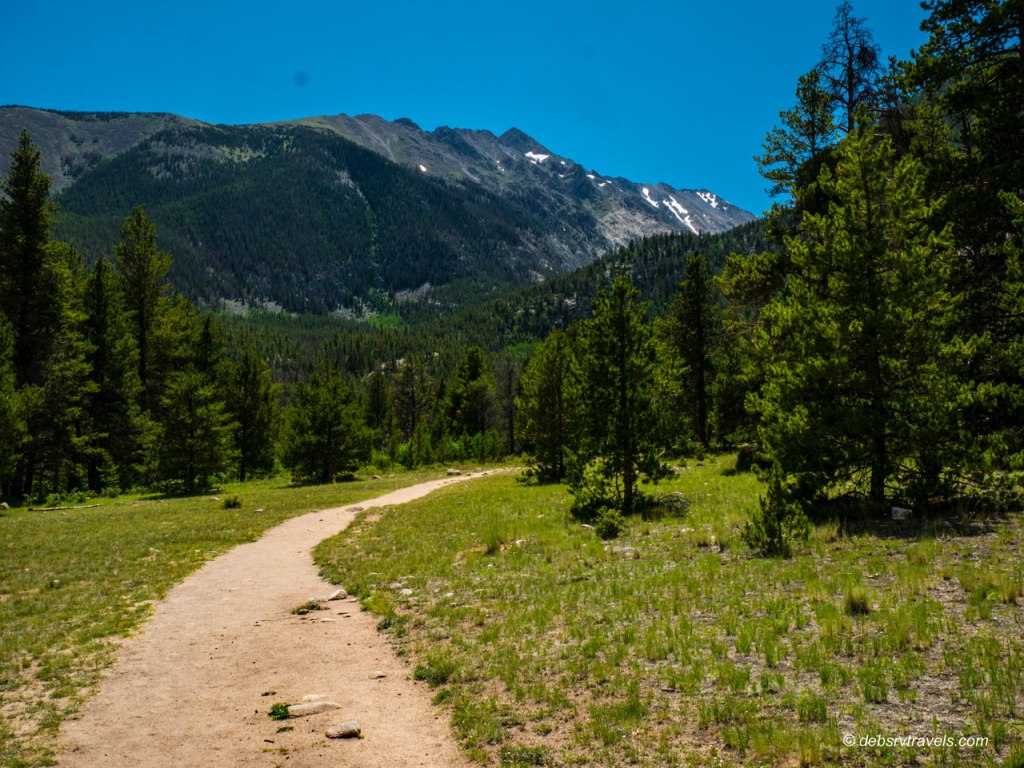 After turning off the Colorado Trail, you cross a nice valley

Still quite a few flowers 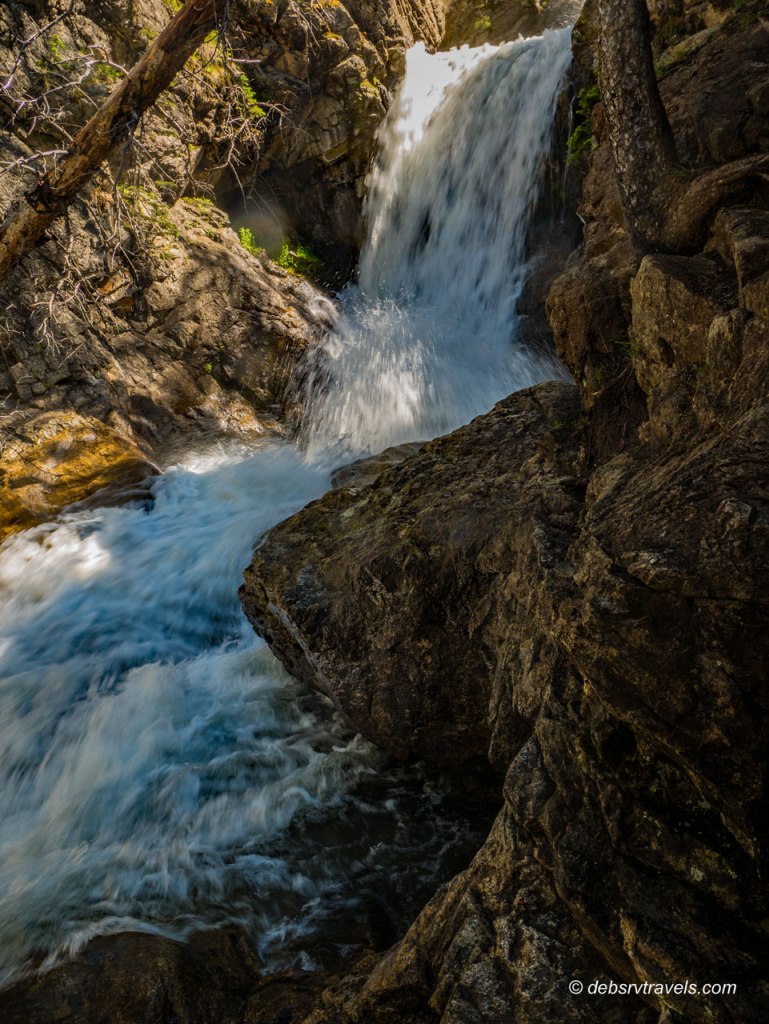 The water was flowing fast

When I was driving from Creede to Salida, I had a trailer tire that the tread had split and was separating.

This was scary when I saw it

I called roadside assistance to change the tire, which left me without a spare. The remaining tires also needed to be replaced. The trailer came with the now discontinued Goodyear Marathon tires, which were notorious for short life span, blowouts, tread separation, etc. I only had about 10,000 miles on the trailer tires. I had purchased a new spare tire when I arrived at Salida, but needed to replace the other four tires. There is a Big O tire store in Salida where I went for the new tires. I purchased the newer Goodyear Endurance tire, which is made in the US and reportedly much superior to the Marathons. I hope so!! I also needed to have the annual maintenance performed on the trailer axles. So I spent a few more days in Salida taking care of this business.