Posted on December 22, 2019 By debsrvtravels

After leaving Bosque Del Apache in New Mexico, I worked my way to Tucson, where I attended the Loft Film Fest for the second time.  I loved it last year, and this year was also wonderful. They showed somewhere around 50 independent and international films from various genres. The two that will probably be most popular with mainstream audiences was the opening night film, The Two Popes starring Anthony Hopkins. I enjoyed it much more than I expected.  Two Popes Trailer

The other was the closing film, Parasite, which is from South Korean director Bong Joon Ho (Snowpiercer). This movie takes lots of twists and turns as it spirals downward and the ending is a real shocker!  Both are expected to be nominated for Academy Awards.  Parasite Trailer

Higher resolutions photos may be viewed in my Flickr Album

Immediately after the Film Fest, I was due in Portal, AZ, where I am volunteering as a host at the Cave Creek Canyon Visitor Center.  I will be here through January. I was here in Cave Creek Canyon for two weeks in the spring and fell in love with the place. The visitor center is operated by the non-profit, Friends of Cave Creek Canyon, and staffed by volunteers. I had been looking for a place that I could volunteer some time and this was perfect for me. It is a beautiful landscape and great birding area. And the Friends group contributes so much to the area.

When I arrived some of the trees still had color.

The visitor center and surrounding buildings were built by the CCC. Next to the visitors center is this quaint bunkhouse that is available for rent. I haven’t seen the inside but the description sounds nice. Details and reservations are available on recreation.gov. Also available for rent is the CCC house which is a little larger, but doesn’t have the charm of the bunkhouse.

The first two weeks I was here, the weather was very poor, so I didn’t get out to do much. The last five days of November we received five inches of rain, the average for the whole month is about 2 inches. All the creeks were running high. December finally brought some sunny days; and I was able to get out and do some hikes.

One of the nicest hikes is the Greenhouse Trail to the Winn Falls viewpoint.  Winn Falls is just under 400 feet tall and is the tallest waterfall here in the Chiricahua Mountains. I had a pretty day for the hike and the view of the falls did not disappoint!

From the viewpoint across the canyon from the falls

When I moved to Colorado, I missed seeing Northern Cardinals. Especially in the winter, they are so beautiful! So I was happy to learn that their range includes this bit of southeastern Arizona. There are a few residents around town who have feeders and open their yards to visitors. There are usually a few Cardinals to be found at the feeders. Since it is a little drab right now, it is a treat to see their color. 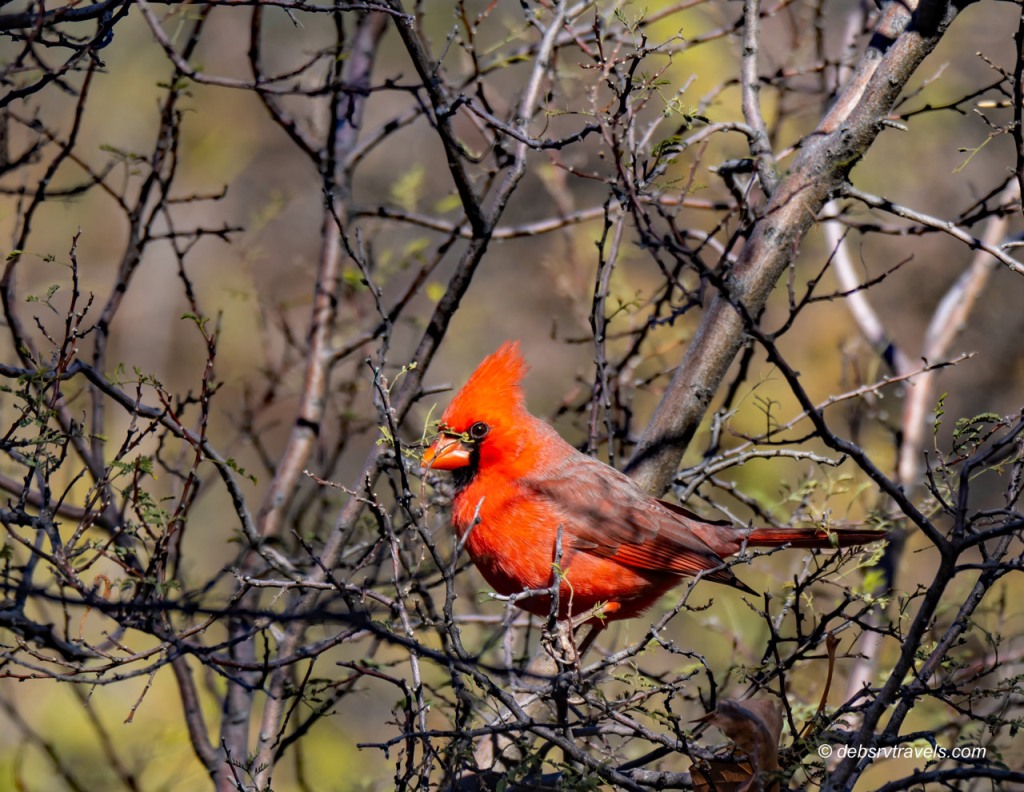 Such a handsome fellow!

Also here in the winter are colorful Lesser Goldfinches.

Its fun to see these lesser goldfinches flitting all about

Arizona Sycamore trees are found along the creeks in the canyons. They attract many birds during the breeding season. I love how their branches twist every which way. 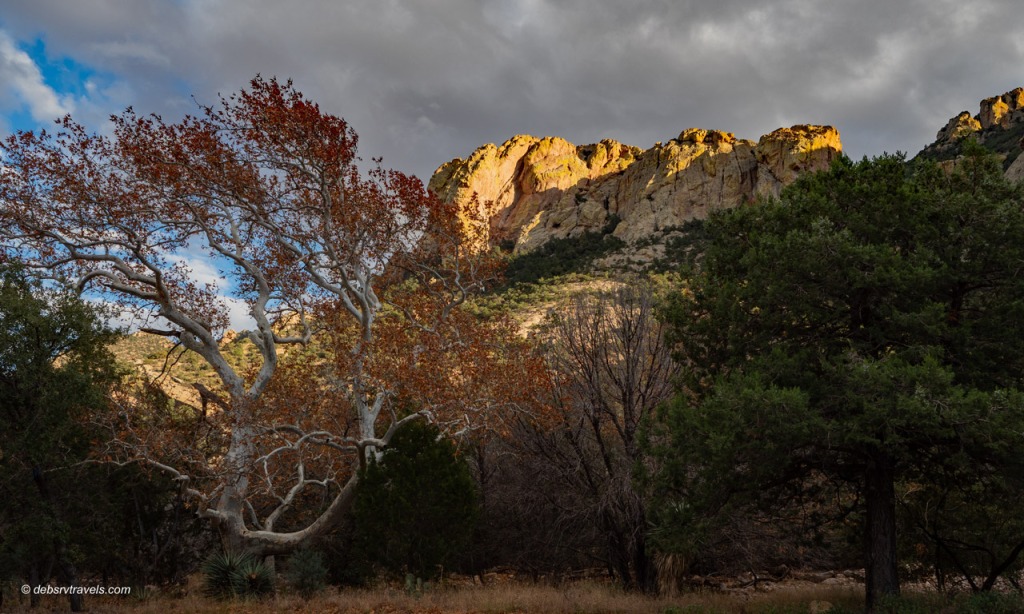 There are a lot of wild turkeys around. When I hiked the Ash Spring Trail, I saw a total of 27!

One of the prettiest hikes is up South Fork Canyon along the South Fork of Cave Creek. The canyon walls are colored by lichen and glow when the sun shines on them.

Well, I just had to include this photo of a Greater Roadrunner! They always make me laugh!

The deer that are found here are a subspecies of whitetail known as Coues Deer. They are not very tall, less than three feet. The ones around the visitor center are pretty tame. One day Misty was outside and this little buck came running over from the trees to investigate this new animal!

One afternoon after all the rains, I walked up the road to check things out. There was one place where the creek had gotten out of its banks and deposited a lot of dirt and debris along the road, as well as washing out a couple places next to the road. On the way back this lovely rainbow graced the sky. 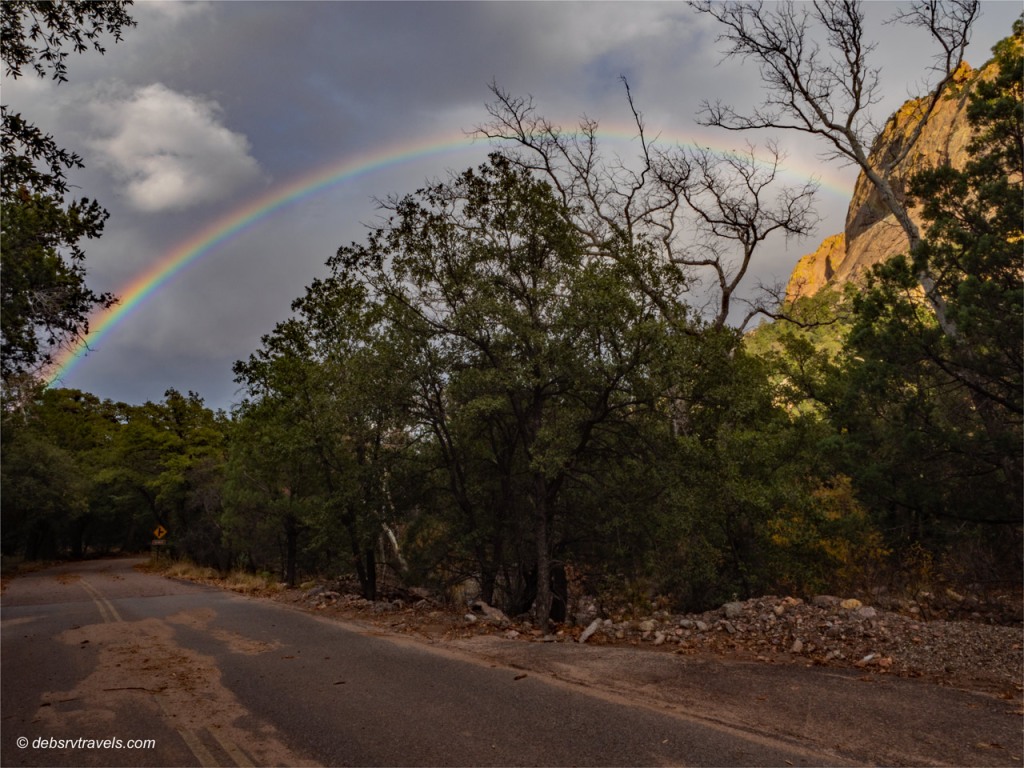 A beautiful rainbow after all the storms

This year has flown by so quickly, it is hard to believe 2020 is just a few days away. I have had a great year and visited some beautiful and amazing places! I am looking forward to what 2020 brings.

I hope all of you have a Merry Christmas, Happy Holidays and a happy and prosperous New Year!