North to Florence, OR

Posted on October 5, 2017 By debsrvtravels

I actually got an early start Sunday morning, pulling out of Edson Creek CG about 7:30. It is rainy and foggy this morning, but it should clear up later on.  My destination today is Florence, OR which is about 100 miles north.

I have a reservation at Woahink Lake RV Park for two nights, which with Good Sam discount was $40/night for full hookups. I have a couple reasons for staying in Florence.  When I head east I will be making my way to South Dakota. Hwy 126 east out of Florence offers the most direct route to South Dakota. Also, with the solar eclipse coming up, I want to travel along the path of totality and Florence is just south of the path of totality. So I will overnight in Florence and take a day trip up the coast.  It will be much easier to stop along the way without the Nash in tow.

I pass thru Bandon and Coos Bay pretty early this morning while it is still foggy.  So can’t see too much.  And this part of the highway jogs away from the ocean after Bandon anyway.  Just south of Winchester Bay is Umpqua Lighthouse State Park.  There are several lighthouses along the coast that one can visit.  I stopped at Umpqua and was very glad I did.  Part of the reason I got such an early start this morning is I didn’t fix coffee (yikes!) or breakfast.  I had planned to stop as soon as I got back to the coast but ended up driving further than I expected.  So when I stop at Umpqua, I make my oatmeal, toast and coffee.

After I finish my coffee I walk over to the museum to check out the tours.  I sign up for the next tour which leaves in about 15 mins. On the tour you go into the lighthouse building and up to where the lens is – you actually can stick your head up in there to look at it. It was very interesting and the Fresnel lens is a masterpiece.

The display case shows some of the different types of lamps that have been used throughout the history of the lighthouse.  On the top shelf are early mineral oil and kerosene lamps. It is amazing that a small oil/kerosene lamp such as these could be used to create the light.  But that is how much the lens magnifies it.

Circular staircase to the top 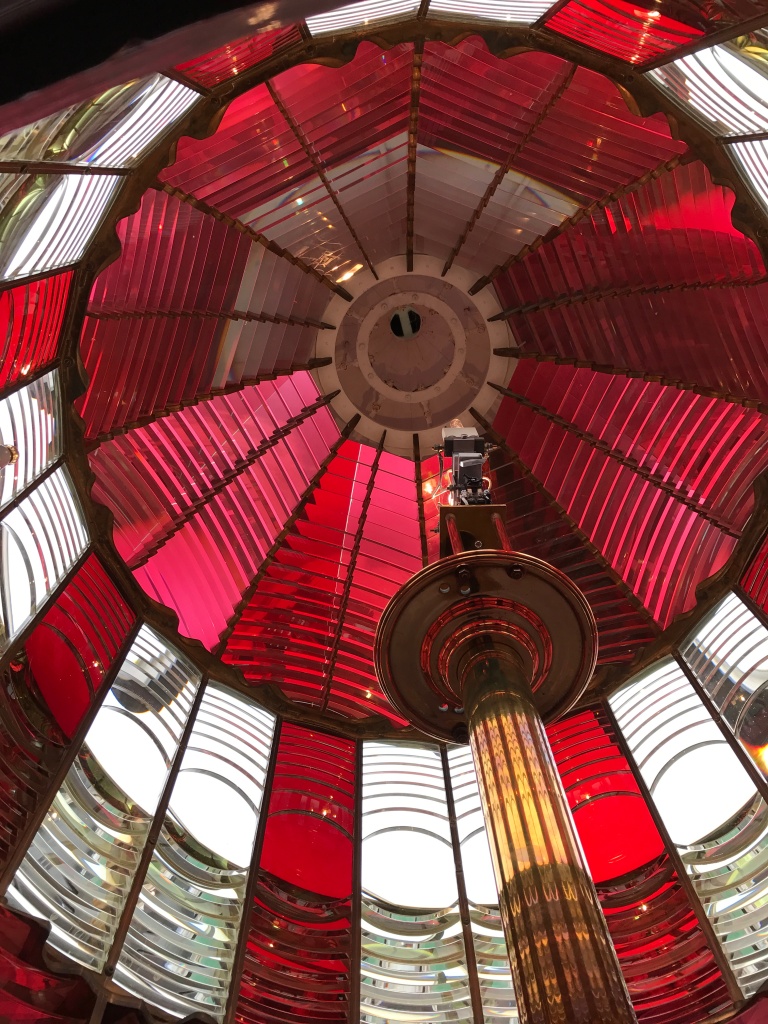 The lighthouse was completed in 1894 and the light was established on December 31, 1894.  The first-order Fresnel lens was manufactured in 1890 by Barbier & Cie of Paris.

Also on display at the museum is a US Coast Guard Motor Life Boat 36 ft.  If you saw the movie, The Finest Hours, this is the same model boat that was used in that courageous rescue mission in which 32 souls were rescued.  The MLB was only designed to carry 20 passengers and 3 crew.  If you haven’t seen the movie, I recommend it.  It is based on an actual rescue at sea. 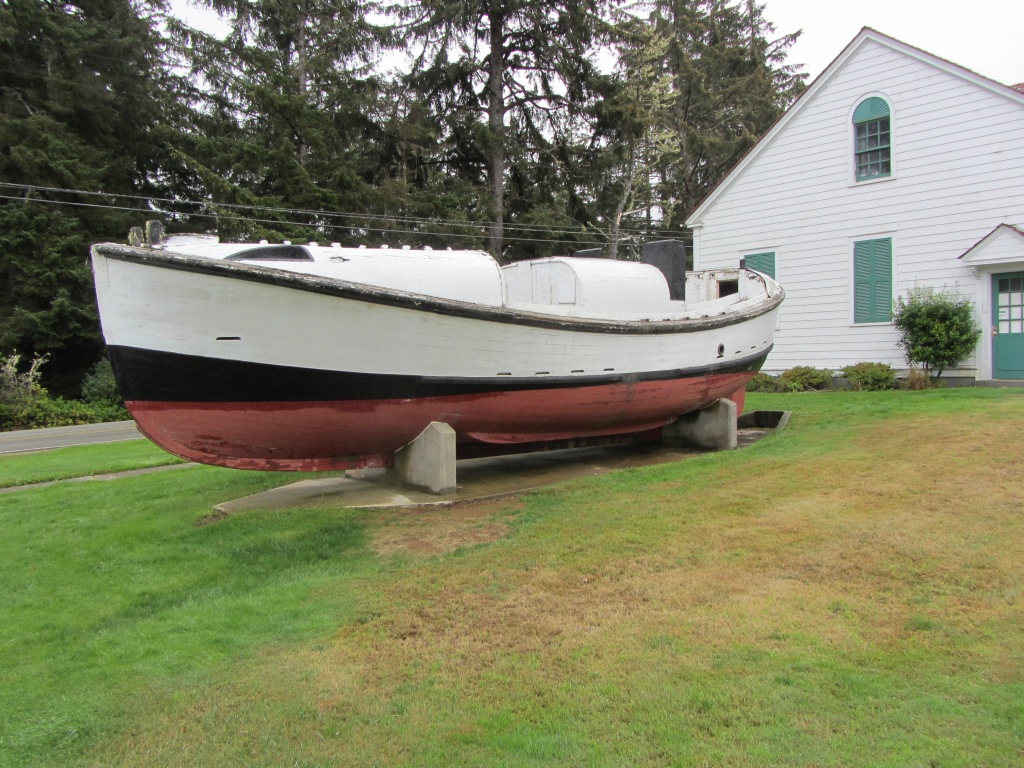 I thoroughly enjoyed visiting Umpqua Lighthouse and the museum.  The Coast Guard had planned to decommission the lighthouse a couple times over the years.  But the local communities campaigned successfully to keep it in operation.  Finally in 2009, the Coast Guard stated their intent to seek a private party to take over the operation of the lighthouse.  And if none was found it would be decommissioned.  Douglas County OR stepped forward and took ownership of the lighthouse in 2010 and is now solely responsible for its operation. I would highly recommend a visit to this park if you are in the area.

From Umpqua Lighthouse, it was only about a 45 min drive to Woahink Lake RV Park. I head on up there and arrive about 1pm. After settling in my site, I take a drive out to North Jetty Park. The wind was blowing strong from the west so the waves were rolling in. 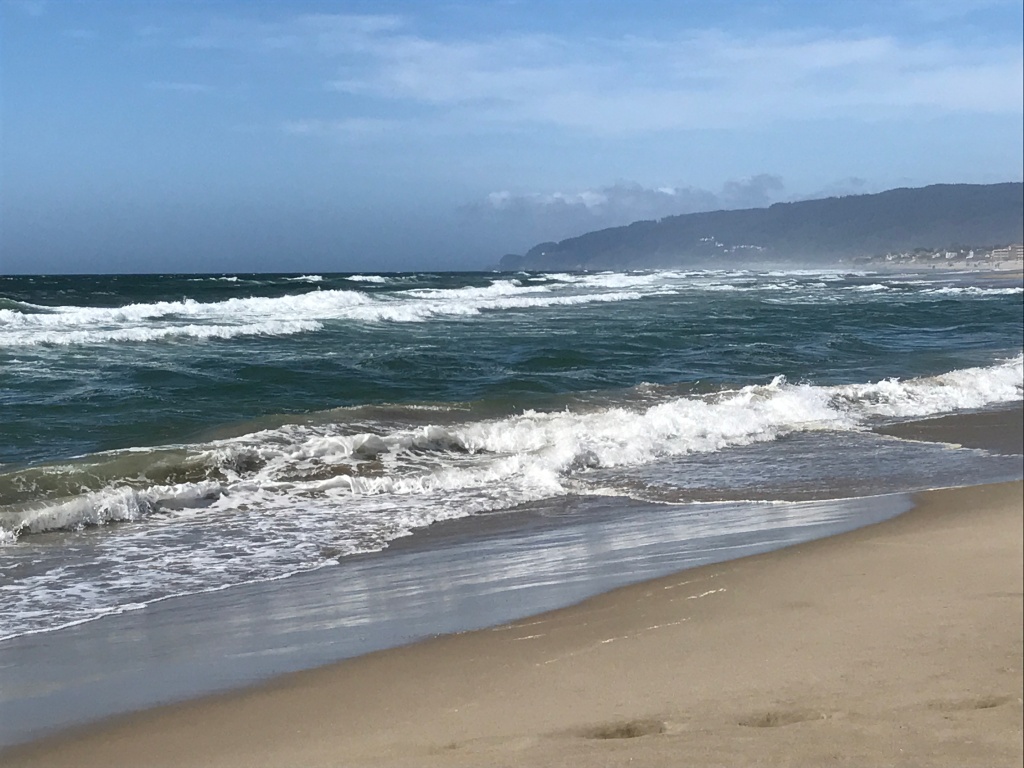 From there, I drive back to the downtown area which is on the Siuslaw River.  Like so many other small towns, they have a trendy section downtown with lots of shops, restaurants, etc.  There is also a large marina and docks where the fishing boats come in.  If you like fish and seafood, the Oregon coast is the place to be.  It’s fresh off the boat!

The historic bridge across the Siuslaw River is a beautiful structure completed in 1936 and currently undergoing renovation.

The RV park has direct access to the Oregon Dunes National Recreation Area.  Just a little before sunset, I walk out to look at the dunes.  They are very popular for ATVs.  I could hear them, but didn’t see any close by. From here the dunes extend 5 miles to the coast!  That’s amazing.  They stretch 50 miles along the coast from Coos Bay to Florence.

I have thoroughly enjoyed these past two days of my first trip along the Oregon coast.  So glad I choose this route.

2 Comments on “North to Florence, OR”