Camping at Kofa and the Quartzsite RV Show

After finishing up in Tucson I head west on I-8.  I’m bound for the Kofa National Wildlife Refuge to meet up with some members of the RVForum.net.  Kofa NWR is roughly 50 miles north of Yuma on Hwy 95.  It’s about 3pm when I get on the road, so I won’t make it there tonight.  There are high winds and rains forecasted for this evening.  My plan is to drive to Gila Bend and stop at a Loves Truck Stop for the night.  It is dusk by the time I arrive and starting to rain.  This Loves doesn’t have a lot of parking and it’s pretty full with semis.  I asked inside about any other parking option but the truck parking area is pretty much it.  There is a rest area about 30 miles further west, I decide to drive there for the night.  Well, I run into some very heavy rain and winds that are about 20-25 mph.  The rain was so heavy I could just see to keep driving at a slow speed.  I was so glad to arrive.  And only a few vehicles are there – I was hoping it wouldn’t be full.  I pull into a space and settle in for the night.  I had eaten dinner at the Loves, so I just went to bed.  Slept pretty well, not much noise. At least the night’s rain washed off the de-icer that covered my truck from driving through Texas.

Next morning I continue to Yuma, which is about 80 miles west. I stopped there at a Fry’s for groceries and gas. After finishing my errands I drove the rest of the way to Kofa arriving early afternoon.  What a beautiful place!

I really love being in the Sonoran Desert.  There is something about the sparseness and wide open vistas that I find so peaceful.  I love the saguaros, the ocotillos and palo verdes – all the vegetation. I haven’t seen any wildlife yet.

This is the first time I have met up with an RV group to camp.  When I first started planning to buy an RV I joined the RVForum.net.  So I had been on there for over two years and had become familiar with many of the members who post on there regularly.  This is a great forum for learning about RVing and getting help with any questions or problems.  Most of the people who came to this gathering were in motorhomes.  So my little Nash is snuggled in there amongst them 🙂 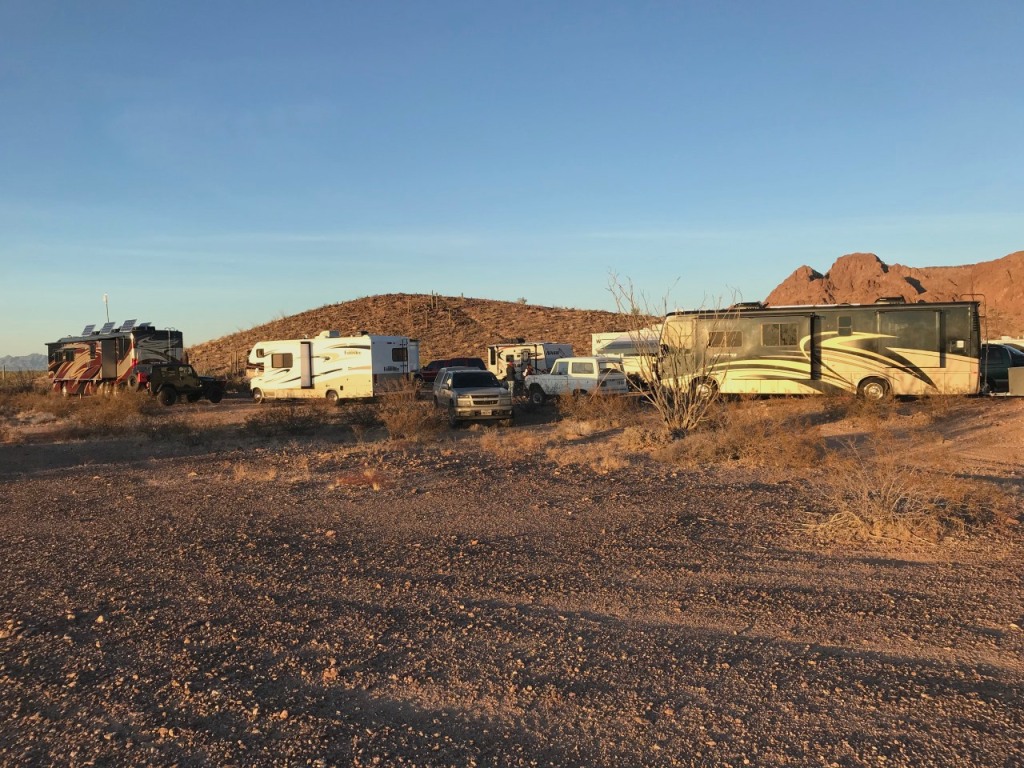 These photos are looking north from where my Nash is parked. 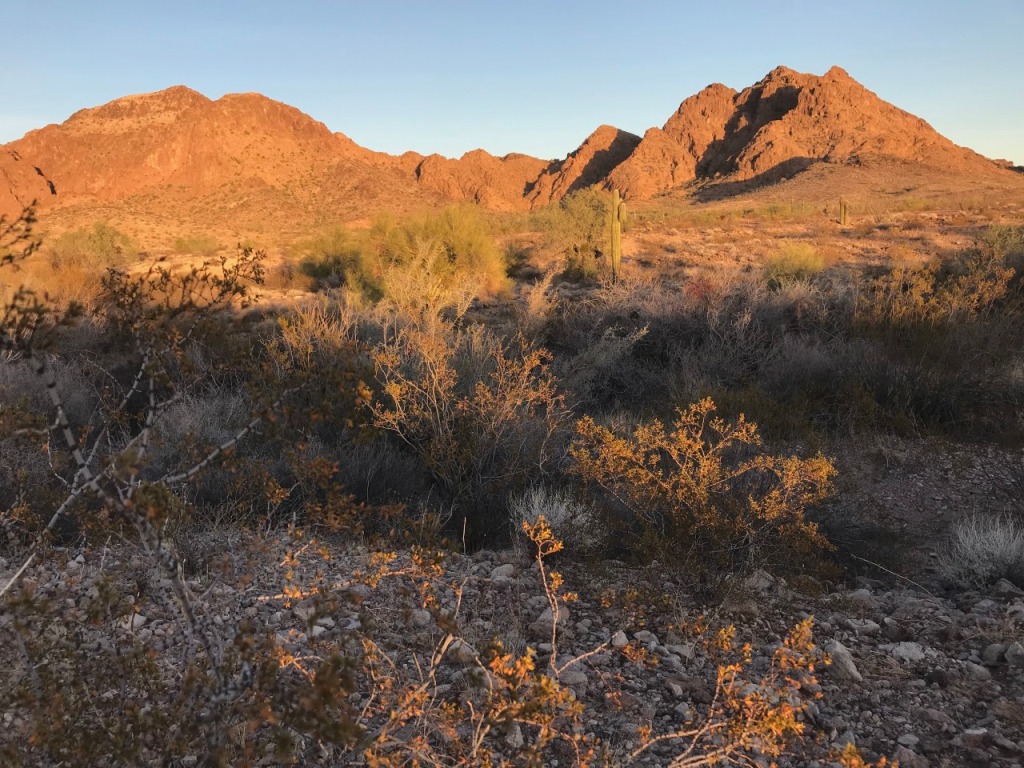 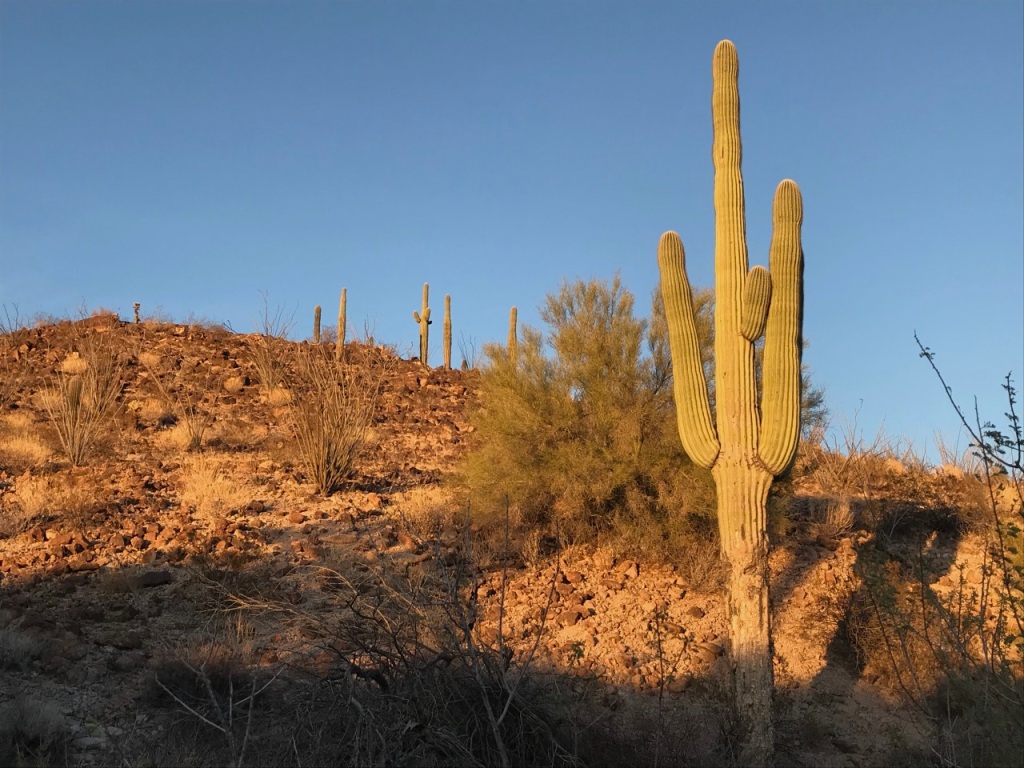 Over the period of about a week, there were 11 or 12 RVs that came to camp.  I really enjoyed meeting everyone and had a great time sitting by the fire at night and hanging out during the day.

One day some of us drove a few miles to the Horse Tanks.  A short hike up the trail leads to a natural rock area where water accumulates.  It has been enhanced by some concrete walls, etc to hold more water for the wildlife.

Another day I drove about 5 miles north to Palm Canyon and went for a hike.  There is a trail that leads up to what is supposed to be the only remaining natural stand of California fan palms in Arizona, which are native to this area.  The palms are about 400 feet above the trail in a narrow gully.  It only receives light for a short period of time around mid-day. 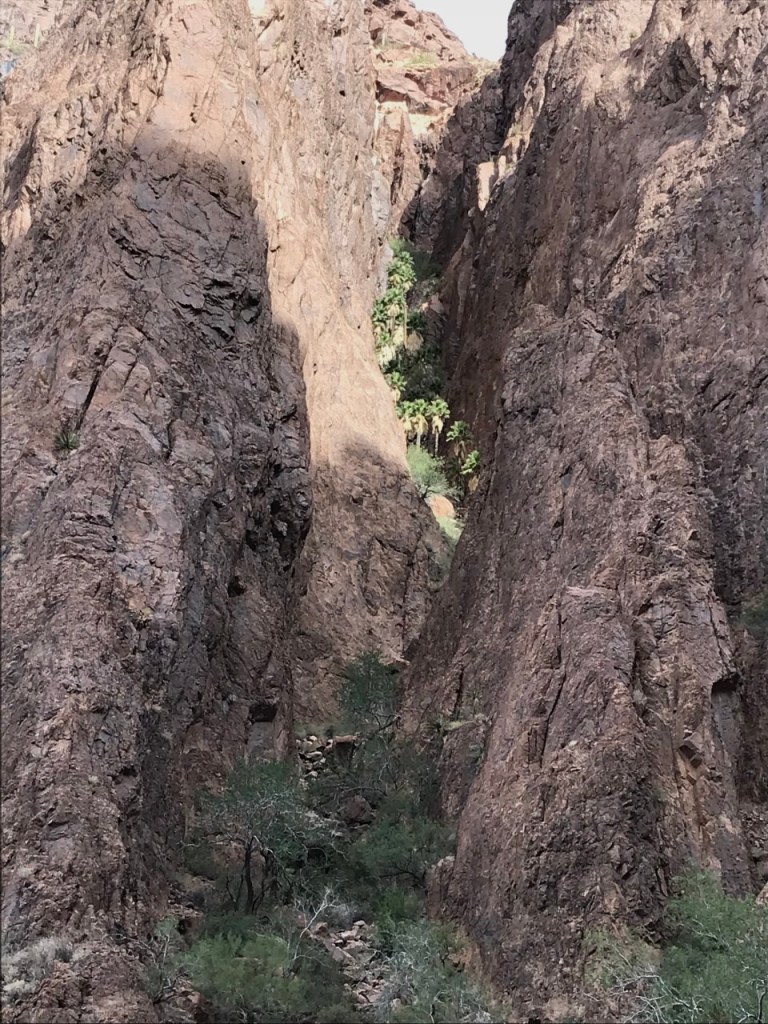 The hike in the canyon has some nice views also.

I met this cute fellow along the way.  His name is Diego and he is an Italian Greyhound.  He was so handsome in his sweater and boots. 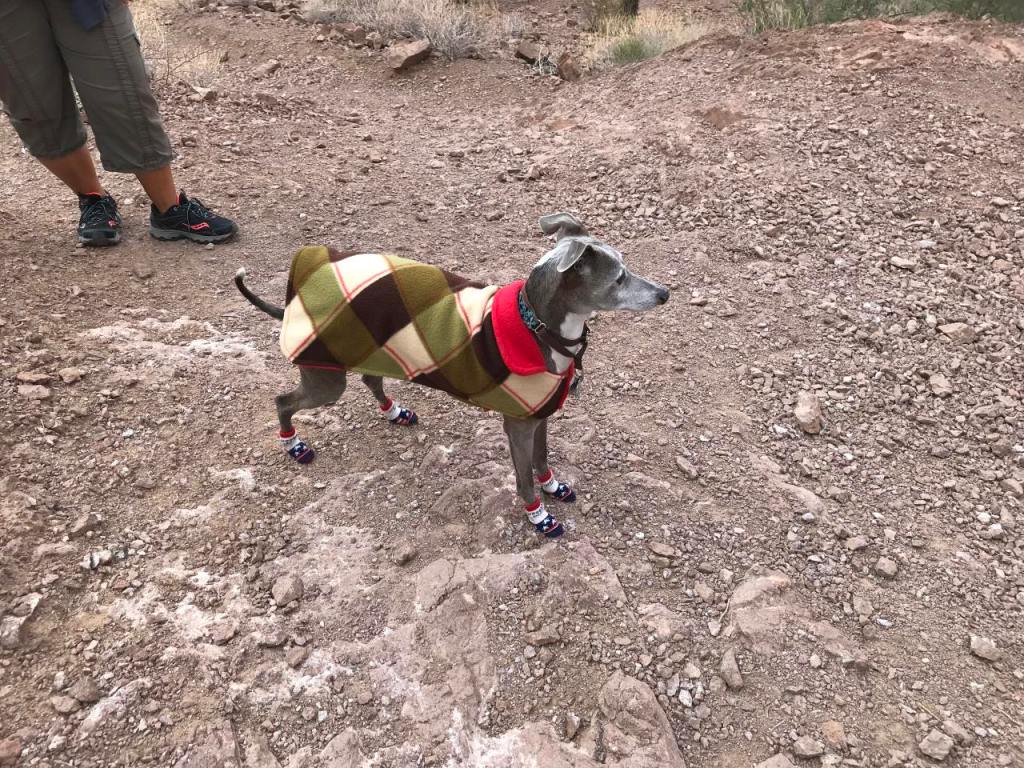 I was out taking some pictures at sunset and ended up getting my picture taken as well. 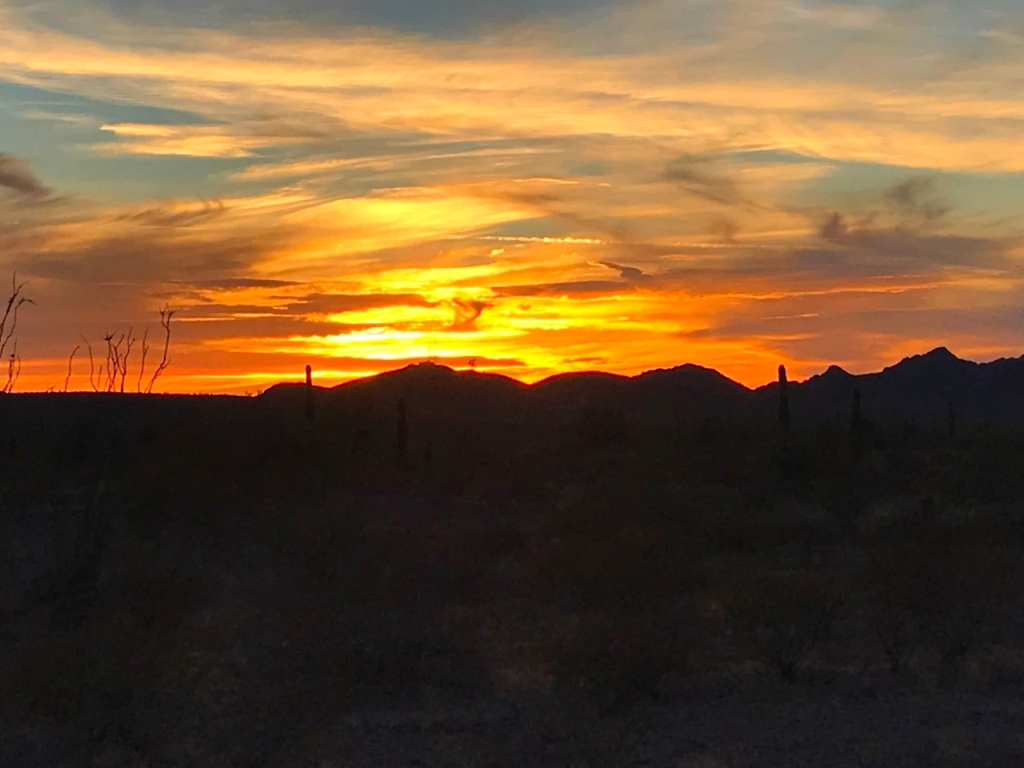 Most of the group left on Monday.  I wasn’t too anxious to go to the hustle and bustle of Quartzsite, so I wanted to stay another night or two.  A couple others stayed also. Wednesday morning I pack up and head up Hwy 95 to Quartzsite to join some of the group who are camped there on BLM land near the RV show location.  I arrive at a good time as the show doesn’t start until Saturday.  So traffic isn’t at its peak yet.

Quartzsite is a town of about 4000 residents.  In the winter though, thousands of RVs are here camping in the desert.  There are several big shows including the RV show and rock and gem shows that are held each year mostly during January and February.  It is said that 1.5 million visitors come here each winter.

Everyone says you have to go at least once to see it.  So I figured I would visit this year.  It isn’t really my thing, but I do enjoy the several days I am here.  I have wanted to purchase a tire pressure monitoring system for the truck and trailer.  The ones I’m interested in are being sold here, so it gives me a chance to investigate further with an eye towards getting one.  After looking around and doing some research on line as well, I decide on the Eezrv Products system.  I purchase the monitor with eight sensors.  The monitor cycles through each sensor and reports the psi and the temperature.  It is programmed to alert for pressure that is 10% below or 20% above the desired temperature.  Also it has a special alert for a sudden rapid decrease in psi. The psi reading seems to be accurate as it reads within 1 lb of my tire gauge. 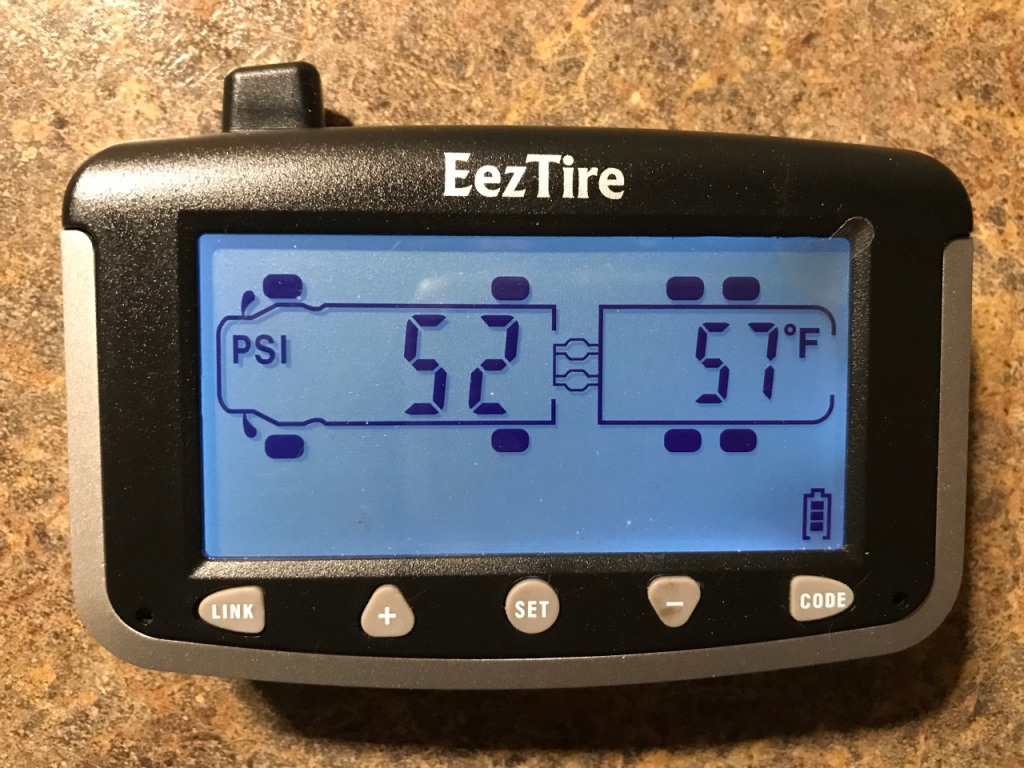 Also, a while back I had purchased a small lamp for my nightstand to provide ambient lighting.  But since I don’t have electric hookup that often I’ve been looking for a 12v lamp. I haven’t been able to find one, so I decided to convert the one I have to 12v.  I have a charging center by the nightstand which has a cigarette lighter type plug in.  When I went up to Phoenix to pick up my batteries, I also went by the Lamps Plus store and bought a 5w 12v LED bulb.  I’ve been looking at auto parts stores for a 12v plug, but haven’t found one I like.  Finally I found one at the RV Show.  With assistance from my neighbor, I cut off the AC plug and re-wired the cord to the 12v plug.  It works like a charm.

I don’t know why, but I didn’t take photos around Quartzsite.  But here is a nice sunset that sent us off as we all said our goodbyes and went our separate ways.

2 Comments on “Camping at Kofa and the Quartzsite RV Show”