Posted on December 30, 2018 By debsrvtravels

As the New Year approaches, I am still in Tucson. It has been nice to have a less hectic travel schedule. I’ve attended fiestas in the area, done some sightseeing, hiking and reading.

Tumacacori National Historic Park is just south of Tucson in the Santa Cruz Valley. It is the site of an historic mission founded in 1691 by the Jesuit priest Father Kino who led expeditions in present day northern Mexico, Arizona and California.

An annual festival is held the first weekend of December.

There are a variety of food vendors, crafts and others.

There are musical groups and dancers representing the different cultures that reside in the valley. 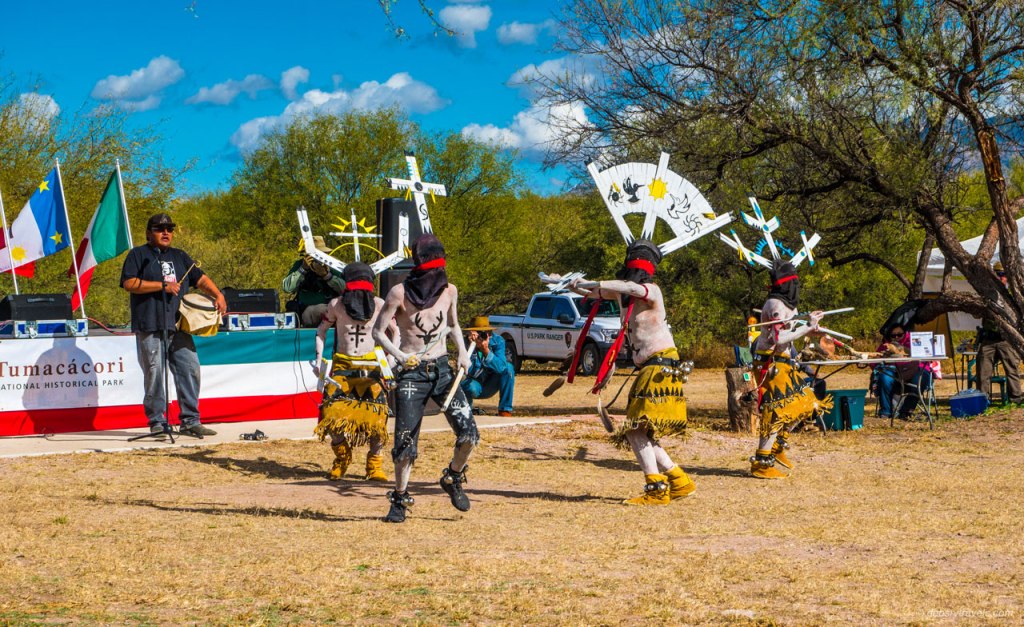 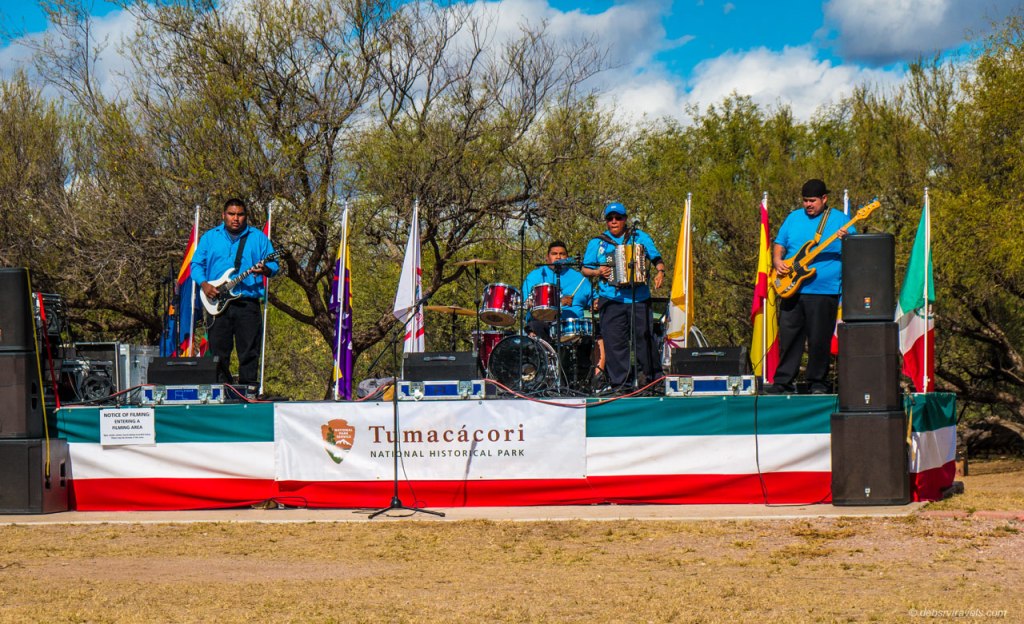 Gertie and the TO Boyz from San Xavier 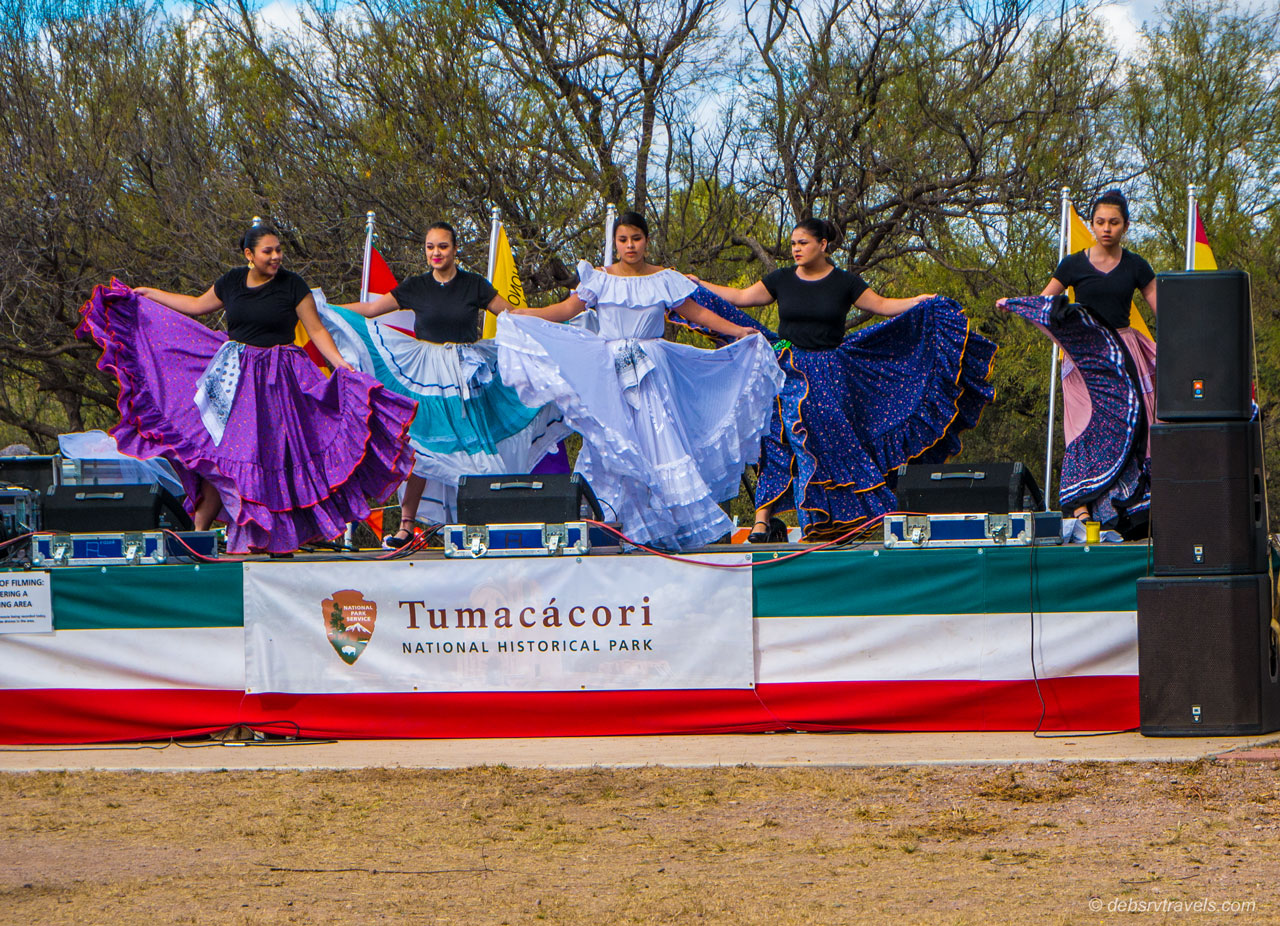 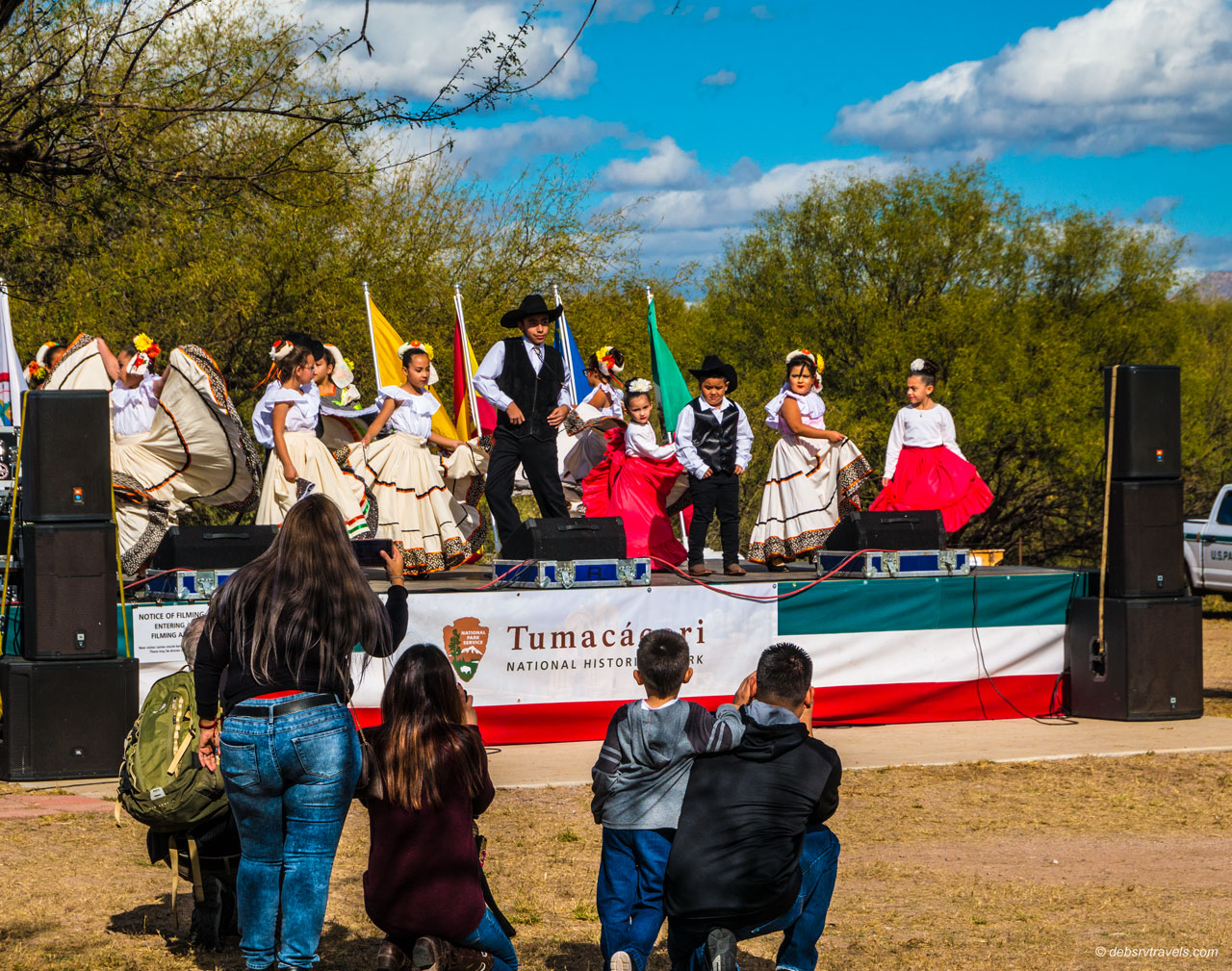 These kids were so cute!

The Observatory is located about 50 miles west of Tucson on the Tohono O’odham Reservation. The observatory has over 20 optical and radio telescopes which are operated by various universities. 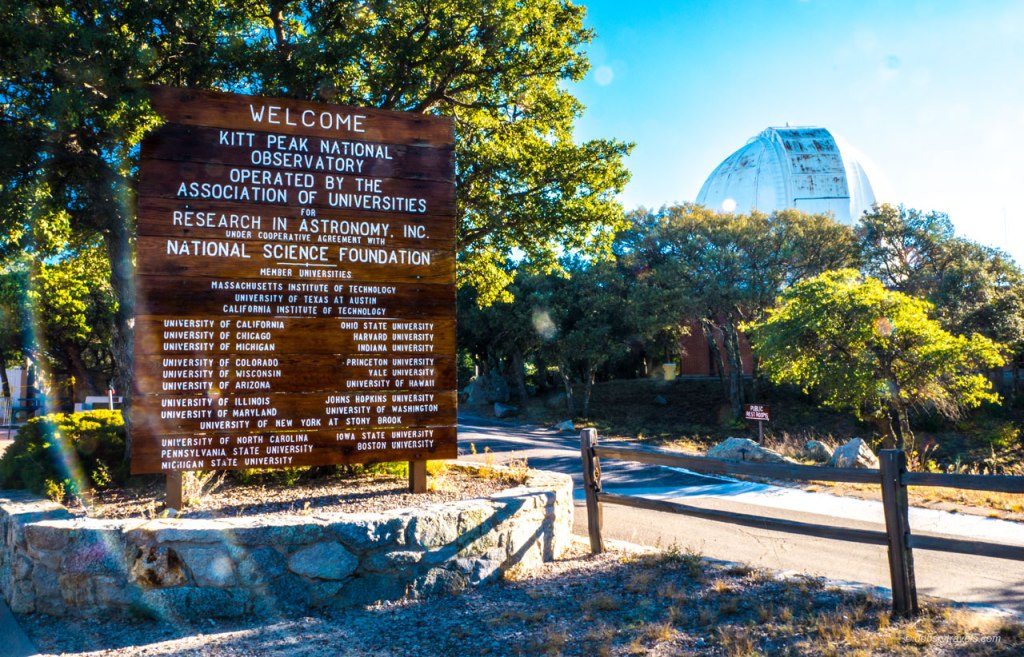 I love the colorful murals that are popular in Arizona.

Photo from the road up to the observatory, looking south to Baboquivari Peak on the right. This is the most sacred peak to the Tohono O’odham people.

I attended the Night Observation Program, which begins just before sunset and lasts about three and half hours. The program starts with a docent-led sunset walk up to an overlook to the west. The docent talks about the history of the observatory and some of the telescopes. Once it was dark, the next session was viewing different space objects through one of telescopes. That was a lot of fun. For the final session, we learned how to use a planisphere to locate stars, constellations and other objects in the sky. We were out on the patio and using binoculars as the presenter helped us to locate objects. It was very dark up there and with the new moon, the Milky Way was brilliant! I enjoyed the program very much and recommend it to anyone with an interest in star gazing and astronomy.

Another day I visited the Air and Space Museum on the east side of Tucson adjacent to Davis-Monthan Air Force Base. The museum is on 75+ acres with around 300 aircraft on display. There are several hangars holding aircraft and other displays. There are old and new aircraft. 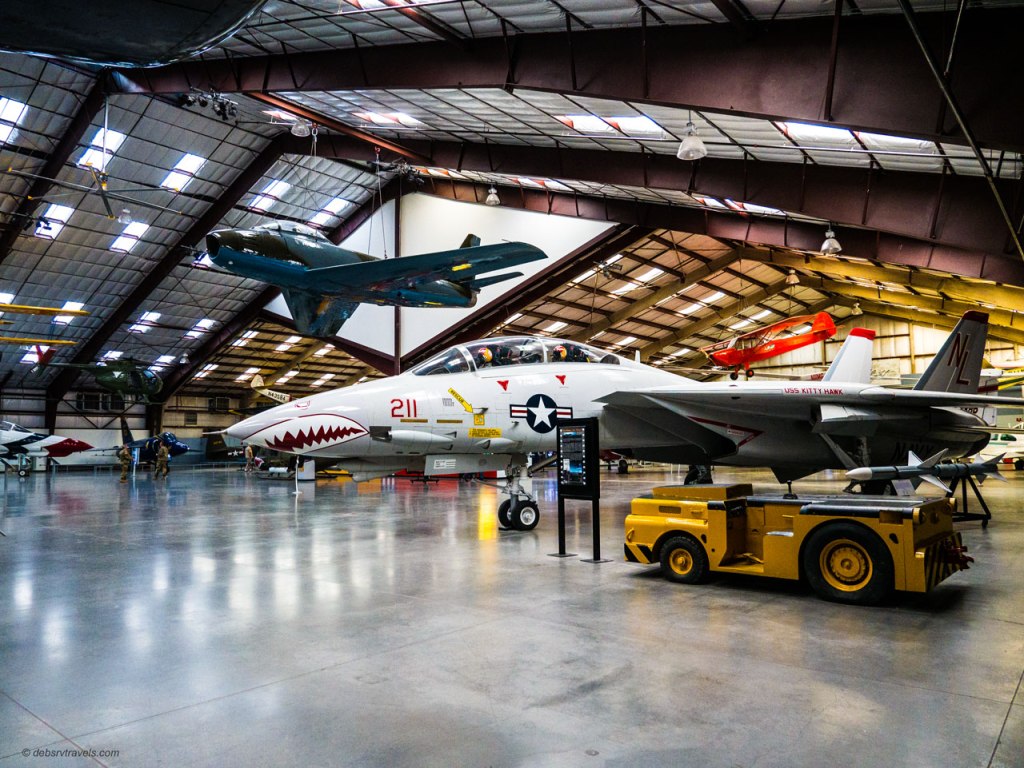 One of the hangers

One building is devoted to NASA and space exploration.

Another houses the Museum for the 390th Bomb Group which flew the B17 bomber. 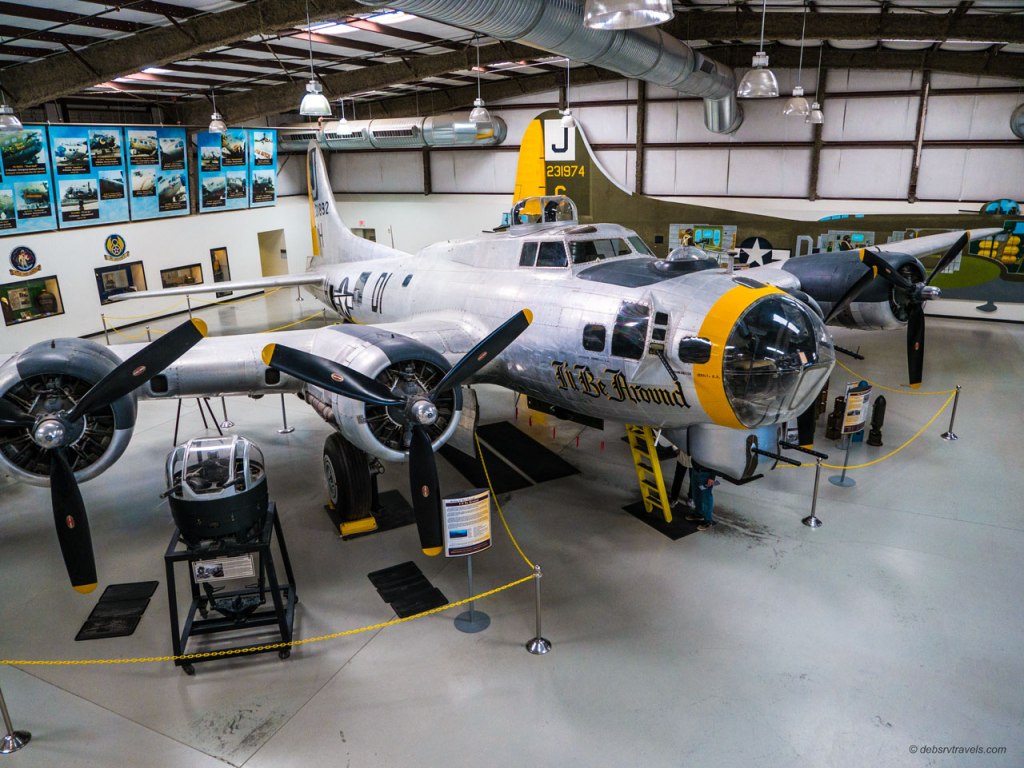 First US flag on UTAH Beach on D-Day

There are several presidential aircraft as well as civilian planes.

One of the presidential aircraft on display 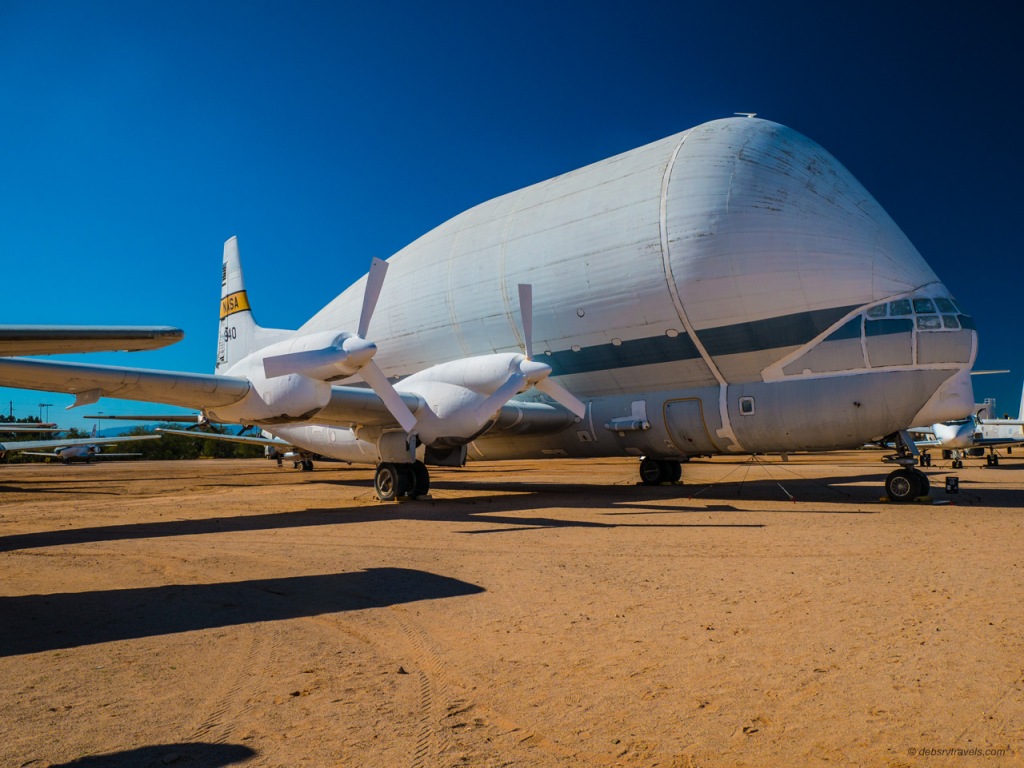 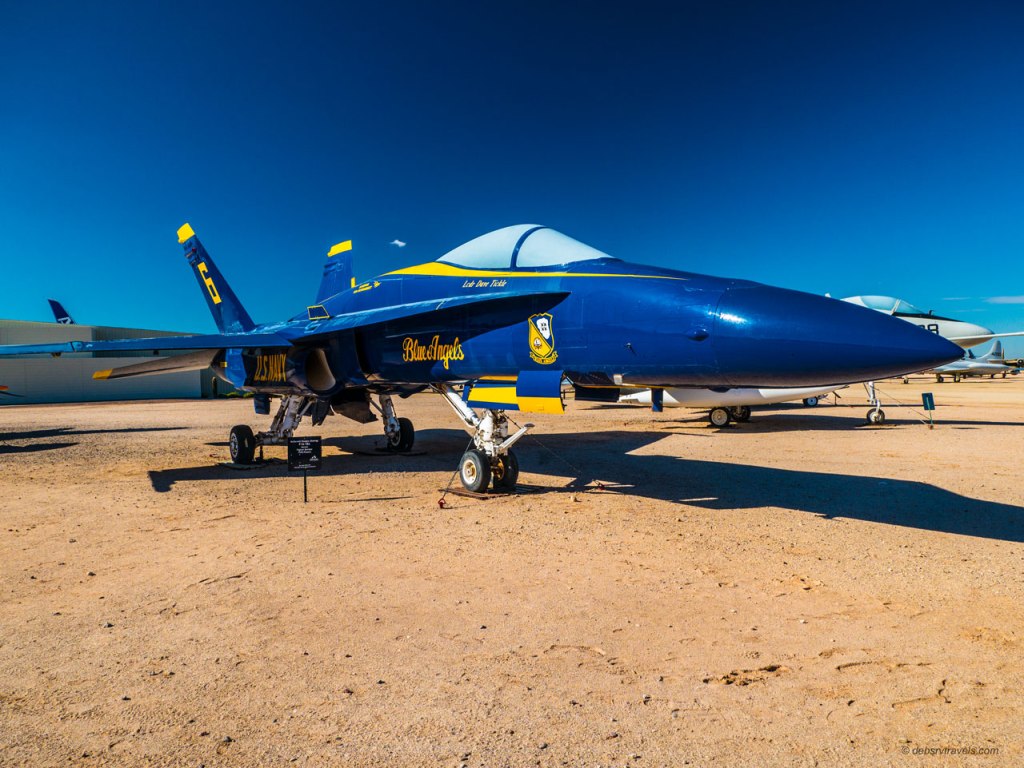 Two of my favorite planes – a P51 Mustang and a Stearman biplane. 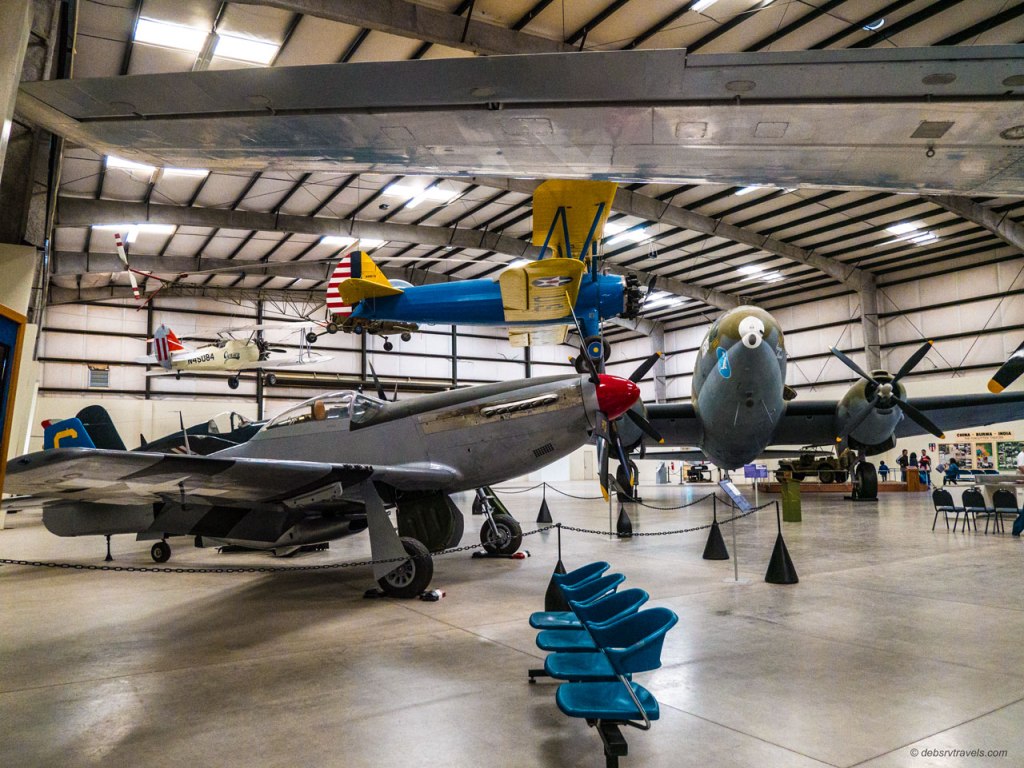 After enlisting in the Navy on his 18th birthday in 1942, George H.W. Bush received his first flight training in a Stearman. After WWII, thousands of the Stearmans were sold to civilians, so they were quite common.  I’ve always wanted to go up in one but never have. 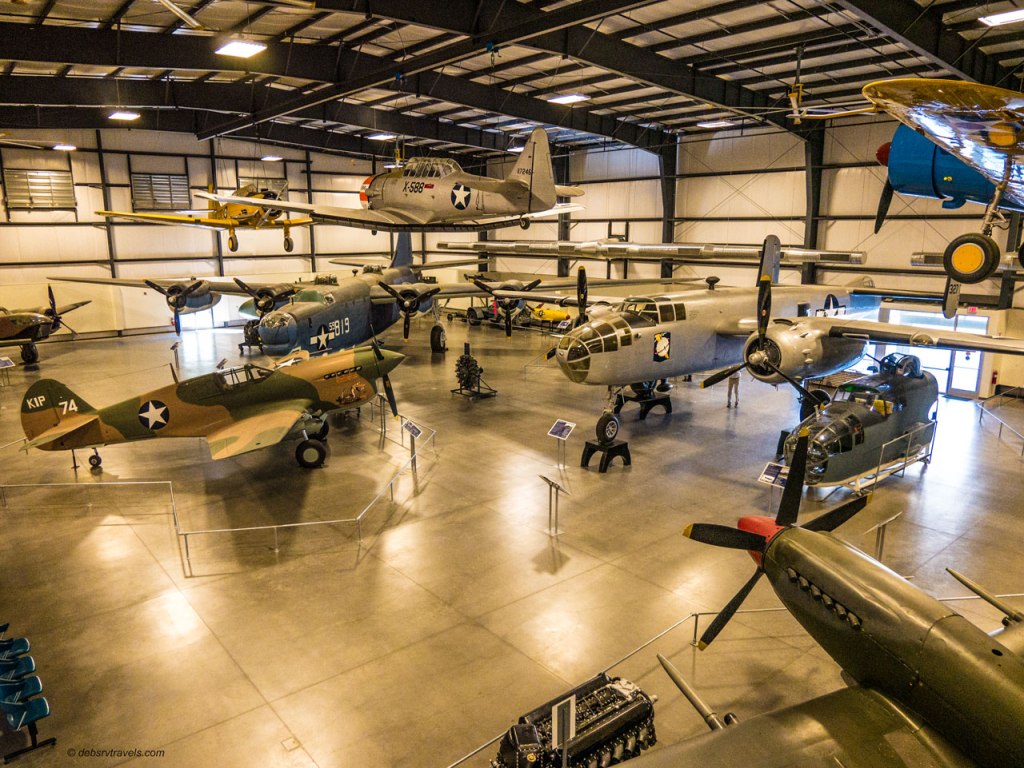 One of the large hangers

I spent several days at Gilbert Ray Campground. This is a Pima County campground in Tucson Mountain Park that is adjacent to the national park. I would say the setting is one of the prettiest campgrounds I have stayed in. I was in loop C and only a few sites were occupied. The sites have electric hookup only, and generators are not permitted. 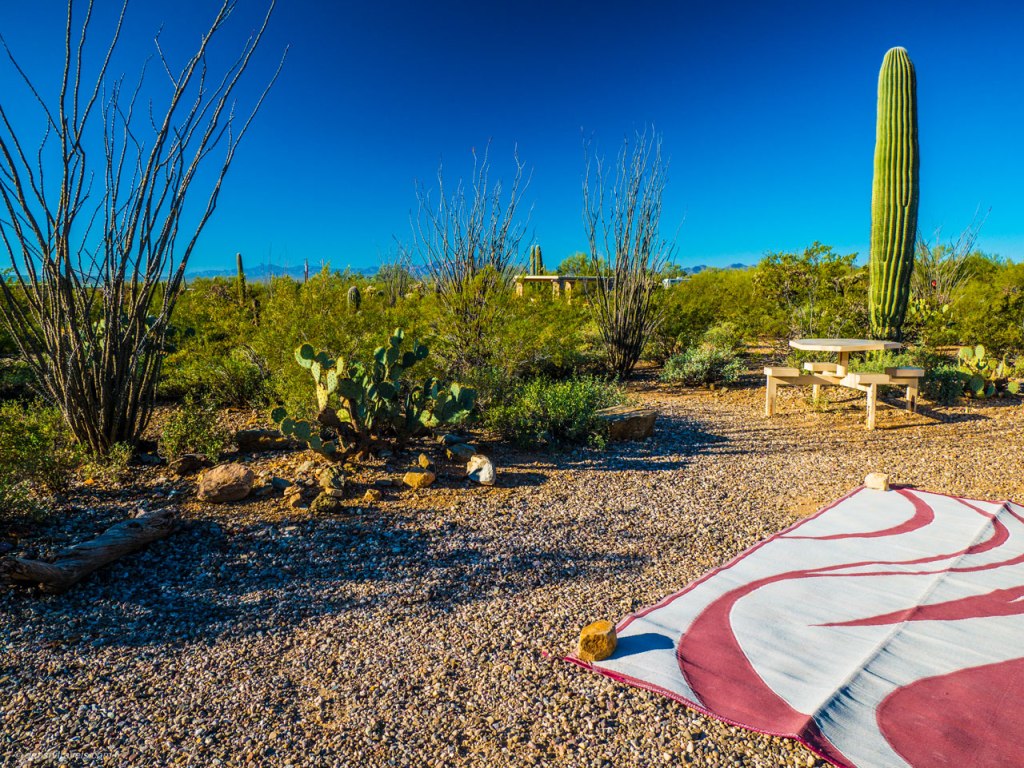 One of the nicest hikes I did in the park was on the Hugh Norris Trail. 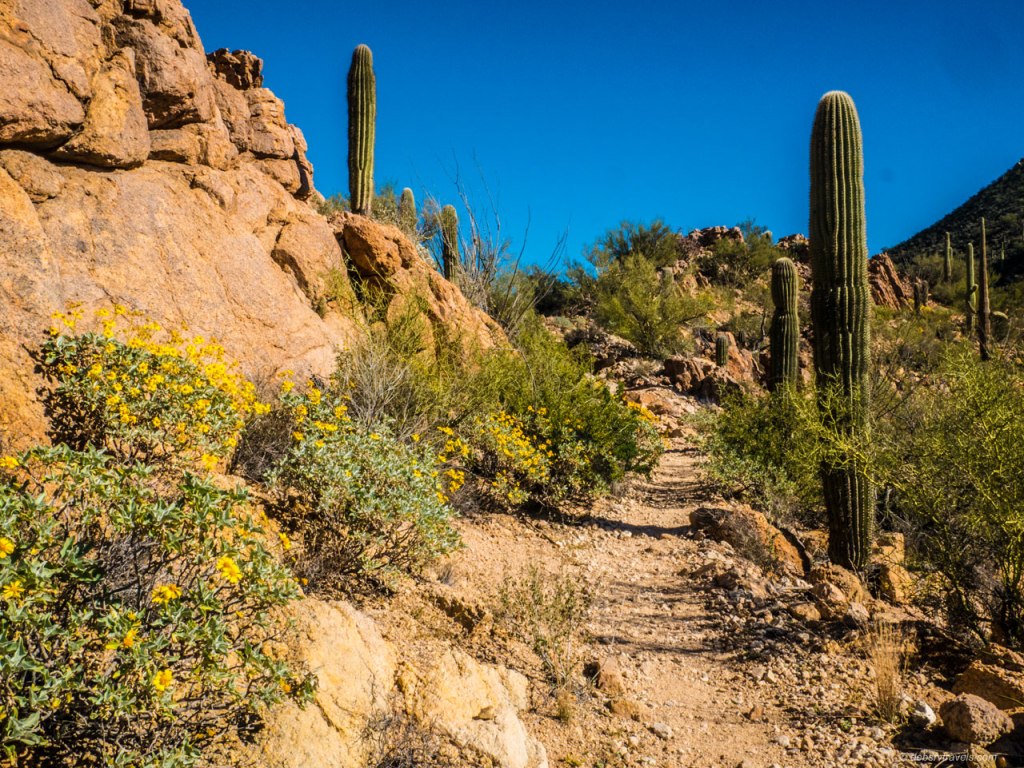 I think the yellow flowers are Desert Sunflowers

This looks like someone planted a garden, it was so lovely.

Someone planted a garden!

At the top of Signal Hill are Hohokam petroglyphs. 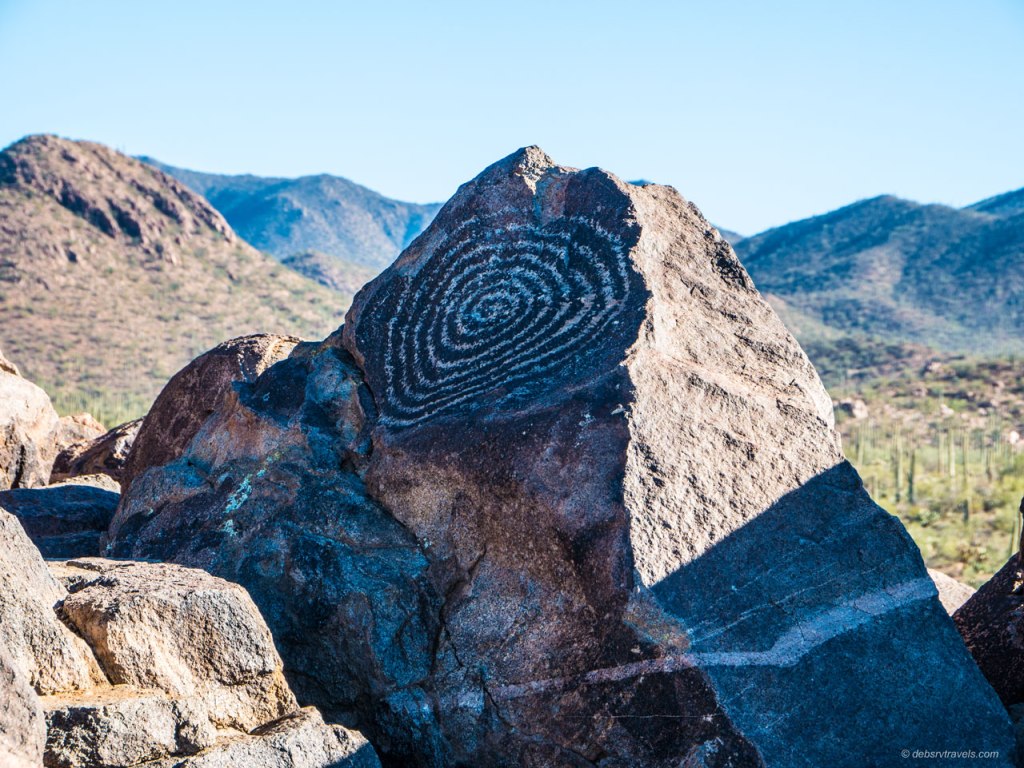 A few days ago I went to Catalina State Park on the northeast side of Tucson. It is on the edge of the Santa Catalina Mountains. It had snowed the night before so there was a dusting on the highest peaks. I hiked a couple of the trails. 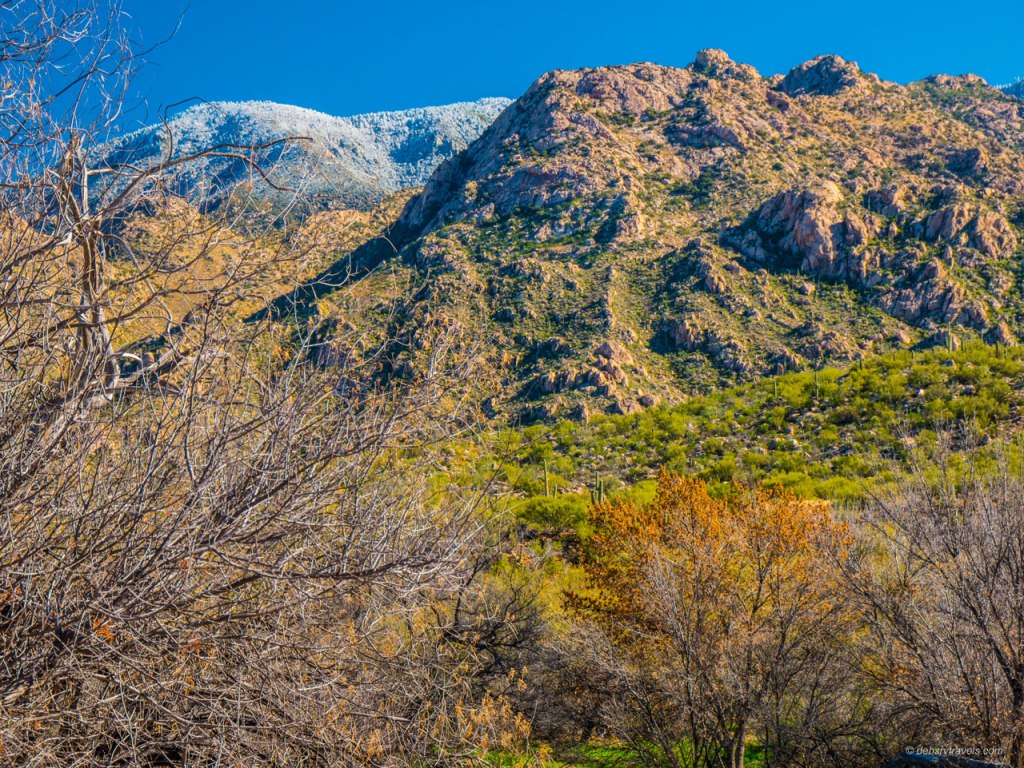 A little dusting of snow 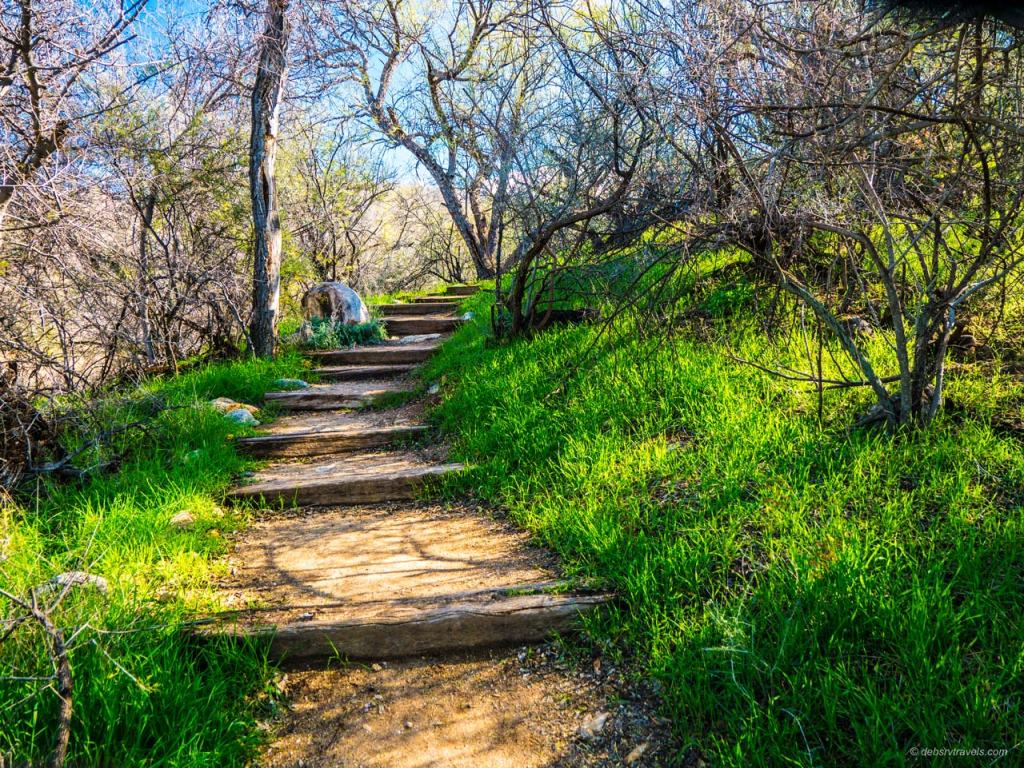 The park has tons of saguaros

With all the rain the stream was flowing

The park was pretty, but very busy!

I have always loved to read since I was a child. A cold or rainy day is great to curl up with a good book. When I was in Sierra Vista (which is in Cochise County, AZ) Robin at Robin’s Books Blog recommended the Joanna Brady suspense series written by J.A. Jance. The main character is the sheriff of Cochise County and based in Bisbee, which is the county seat. The events take place all around the county and up into Tucson. I always keep my Arizona Benchmark Atlas handy for reference! The books are enjoyable reads but it is even more fun to read about places you have been or are familiar with. Check out Robin’s blog if you are looking for book recommendations.

I’m currently about halfway through Destiny And Power: The American Odyssey of George Herbert Walker Bush. It’s a good biography, but very sympathetic to Bush since it was the authorized biography. The author, Jon Meacham, spoke at President Bush’s funeral.

In a few days, I’ll be leaving Tucson for the Quartzsite area. I read that alot of the BLM camping areas over there are closed due to the government shut down. It may be interesting to find camping. Thousands of snowbird RVers come to that area in January!

Wishing you all a Happy and Prosperous New Year!!!

2 Comments on “A Laid-Back December”