On Monday, May 6th, I left Sierra Vista to begin the journey north through Arizona. My plan was to travel north past Phoenix to Payson, continuing east on Hwy 260 over the Mogollon Rim and to Petrified Forest National Park.

I stopped for the night at Lost Dutchman State Park. This put me on the northeast side of Phoenix so I wasn’t traveling through the city during rush hour the next morning.

The park is in the desert on the north side of the Superstition Mountains. The sites have electric and water hookups and were spaced nicely. They are set up with the connections on the backside of the site, so to connect, one has to pull through with the door facing the road. The picnic table is also by the road. That seemed like a strange setup to me.

This is the first time I have seen the desert awash with the yellow blooms of the palo verde trees – what a gorgeous sight! I took this photo just after sunrise Tuesday morning. As you can see, rain was imminent and there were some sprinkles while I was on a short walk along one of the trails.

The desert was awash with palo verde blooms

Not long after I left the park, the rain began and continued for all of that day’s drive. I took Hwy 87 up to Payson. The road was a nice four lane drive. There were a couple long descents with 6% and 7% grades, which normally wouldn’t bother me. But having been in the flatlands for several months I was cautious, especially with the wet roads. As I’m traveling downhill geared down to second to keep my speed at about 50 mph, I hope my transmission doesn’t decide to go out about that time! This was my first time crossing over the mountains in northern Arizona and this looks to be about the easiest route. Looking at a map, most of the other roads appear to have some pretty twisty sections.

It was still raining when I arrived in Payson and stopped at the USFS ranger station. I had planned to camp up on the Mogollon Rim, but the next several days were forecast to be rainy and cold. The rim is at about 7,000 ft. So I thought camping a little lower for a couple days might be better. I found a dispersed camping spot in Little Green Valley. But it turned out to be just as cold as on the rim and it was very dark and dreary. After two nights I decided to go up on the rim. There is a dispersed camping area with designated campsites on FR 9350. The roads up here are sand rather than red clay, so even with all the rain they were in good condition. The sites are much larger than in a campground and further apart. You can still hear a generator running in a neighboring spot, but not too bad. I was in site 9, which is on the rim side. It was very roomy and open, so I had no difficulty with the batteries keeping charged, even with the bad weather. I had good cell signal, both Verizon and AT&T. The Mogollon Rim is a 200 mile escarpment that forms the southern limit of the Colorado Plateau, with a 2,000 foot drop to the forest below. The Colorado Plateau extends across western Colorado, eastern Utah, northwestern New Mexico and most of northern Arizona. The Grand Canyon is within the Colorado Plateau. 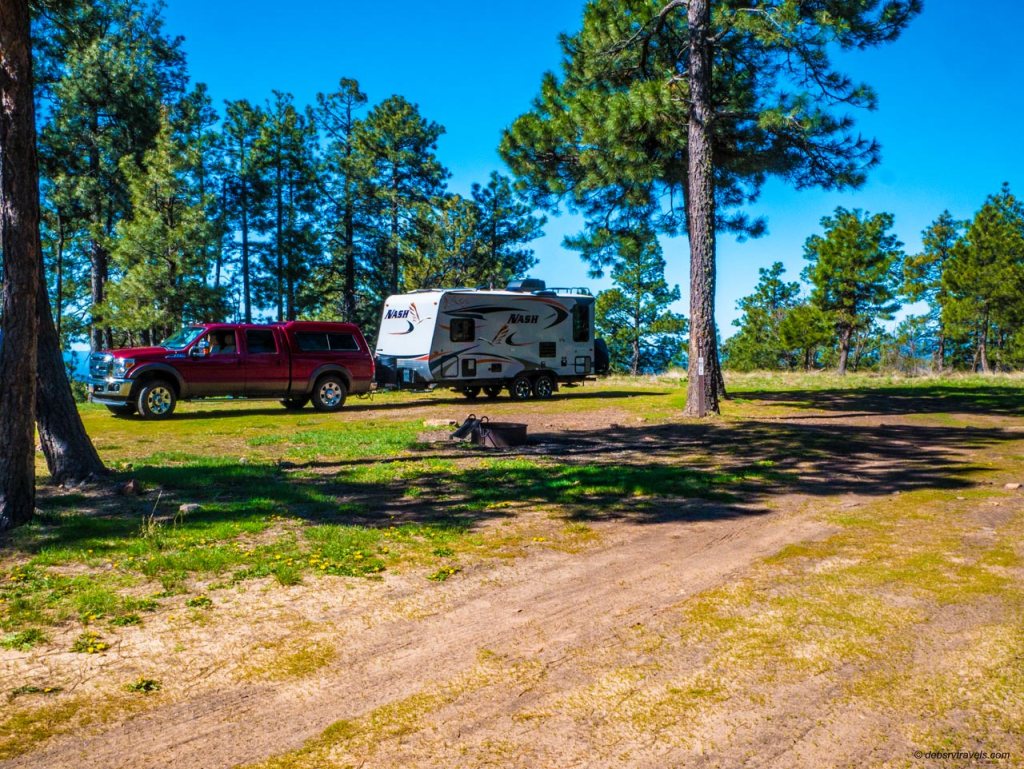 Looking over the rim

There was a lot of elk sign and another camper told me that a wolf had been seen in the area. The last night, these three elk were browsing right by my trailer. I took this photo through the kitchen window. It was low light, so it’s a little blurry. I was trying not to make any noise that would scare them away. These were the only elk I saw and never saw the wolf. 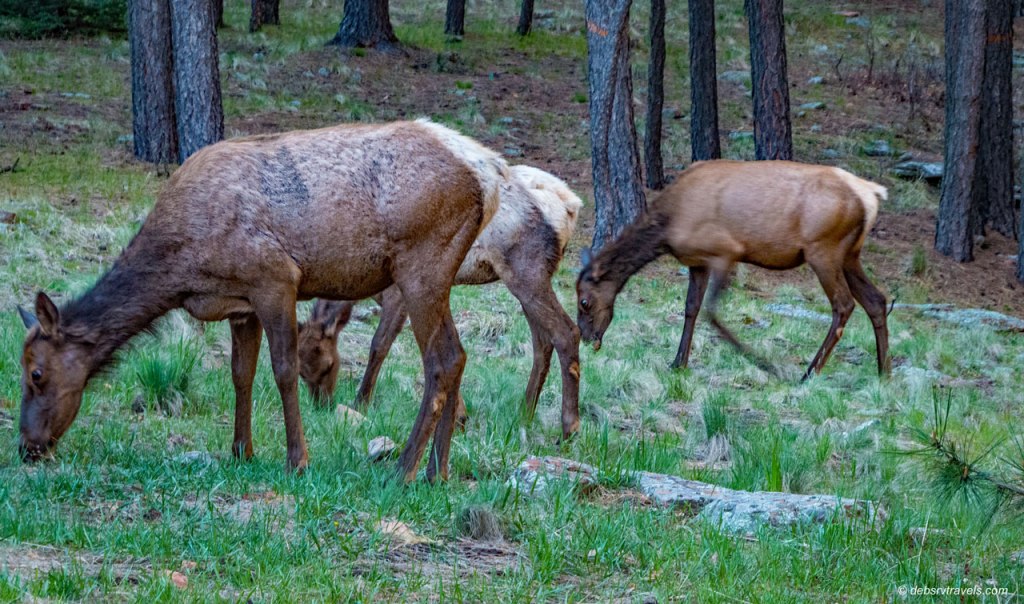 I stayed at the rim four nights, mostly because I didn’t want to travel in the rain. Finally, Monday the 13th was a sunny day, so I hit the road headed to Holbrook, AZ. I stopped at the Safeway in Holbrook. Then I headed east on Hwy 180 to the south entrance of the national park. The Crystal Forest Gift Shop has a free “campground”. It’s basically a parking area. There are small concrete slabs that delineate the parking spots; there are no hookups. Since the park doesn’t have a campground, it is nice to have this option right at the entrance. Otherwise one has to stay in Holbrook, about 20 miles away. The park staff says a campground is in the works and may be in operation in a couple years.

I stayed through Wednesday and hiked most of the interpretive trails and drove the park road up to the north visitor center.

Along the Crystal Forest trail

Remains of a pueblo constructed of petrified wood 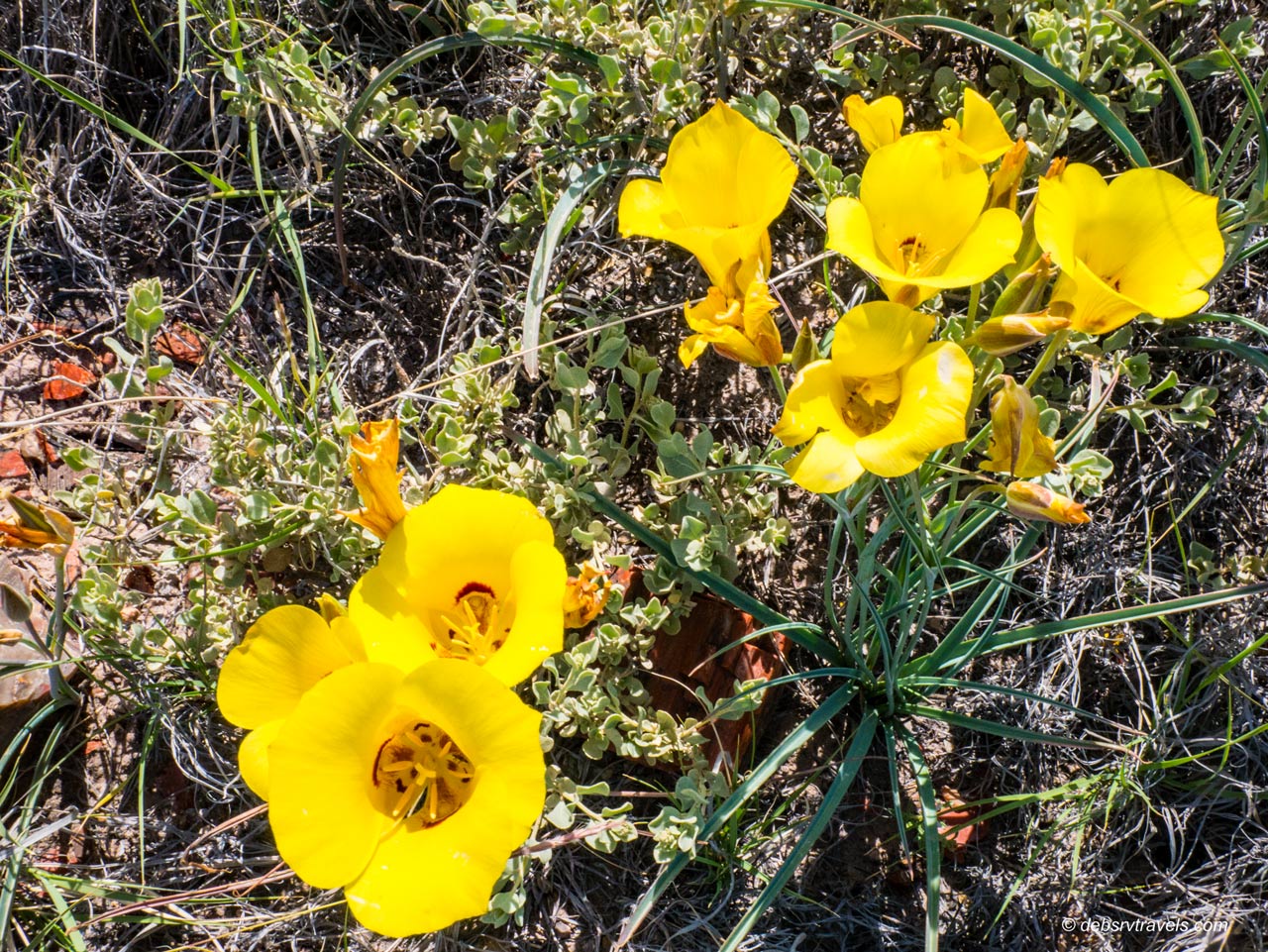 Colors of the petrified wood

Striped Whipsnake. This is the 4th snake I have seen so far this year. It was under a rock I was going to sit on, but had a look around it first 🙂

On one of my hikes there were several panels of petroglyphs.

On the panel below, the figure in the top, center I believe is a depiction of Kokopelli, the fertility deity. Kokopelli is usually depicted as a humpbacked flute player. This is the first time I have seen one. 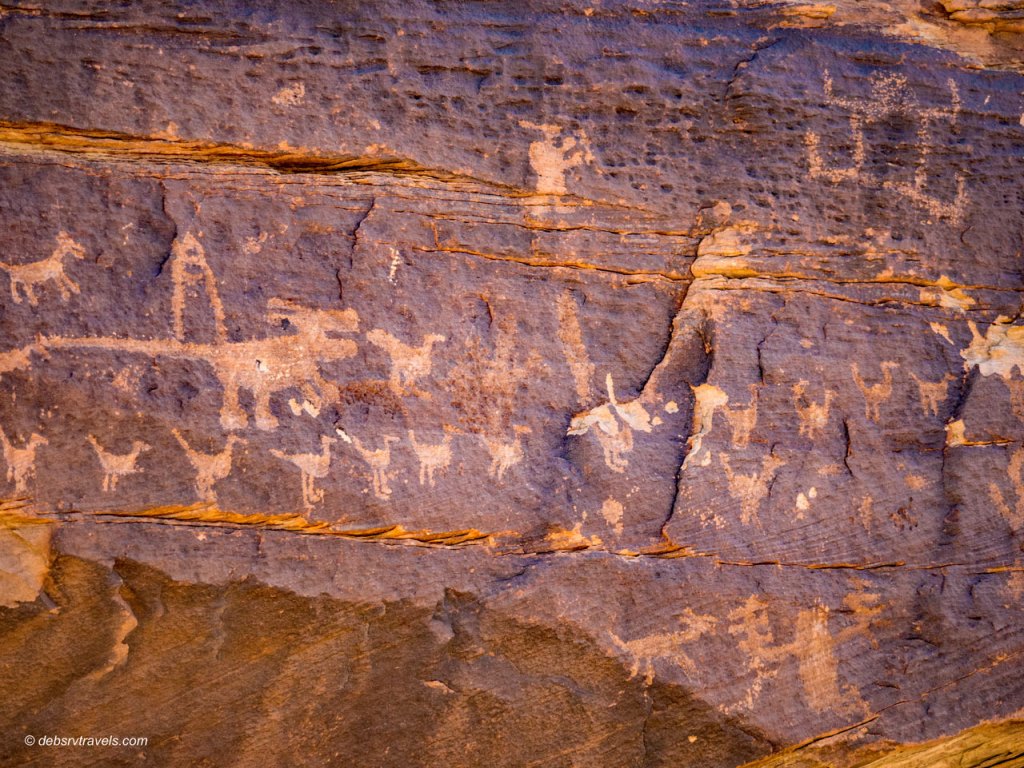 I think this is a Kokopelli

I-40 crosses the northern part of the park. Much of I-40 follows the route of the historic Route 66 highway. Just after crossing over the interstate, this rusted out 1932 Studebaker sits at the site of the old road. According to the sign at the pull out, the telephone poles follow along the old roadbed. There isn’t any visible sign of the road however.

The northern part of the park is in the Painted Desert and looks very different from the southern part.

I might have spent another day or two here, but there was a very high wind warning starting midday Thursday, with high winds continuing for several days. I didn’t want to be stuck here that long so left early Thursday morning for Chinle, AZ and Canyon de Chelly National Monument.