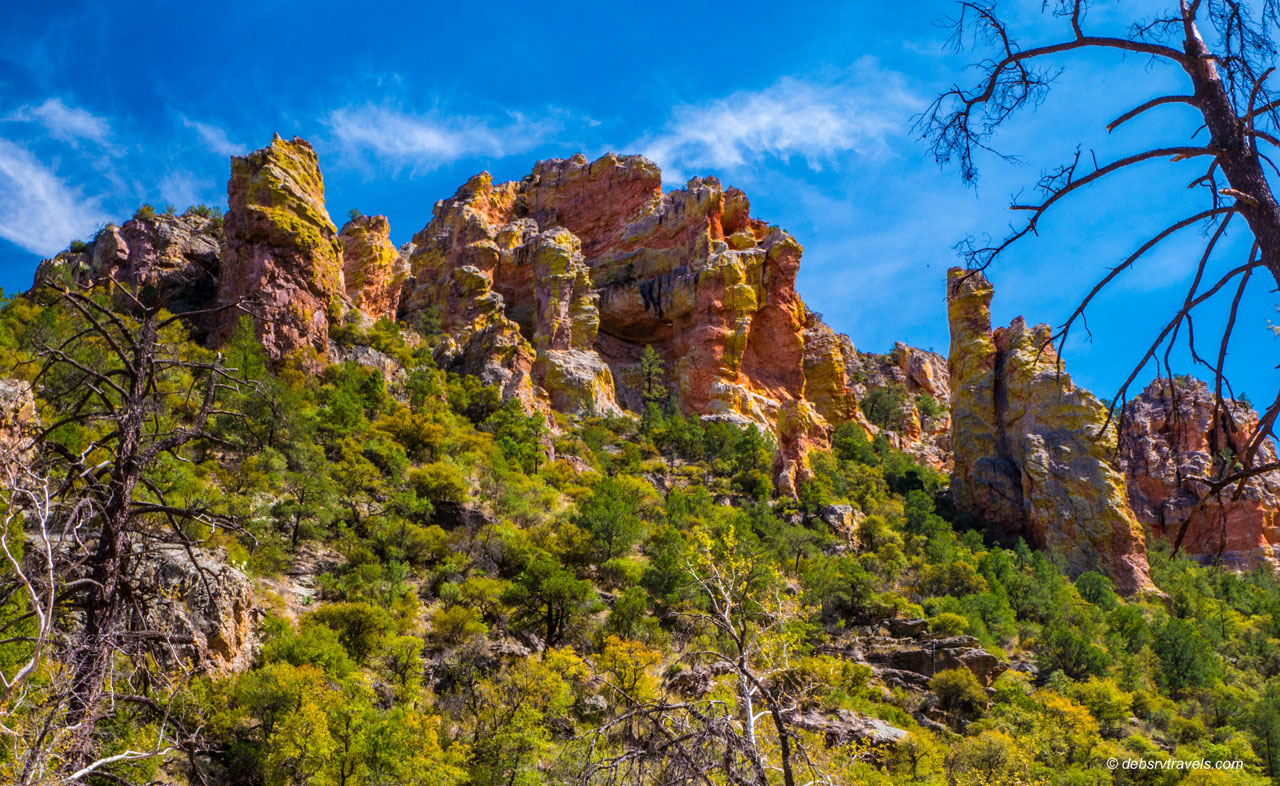 From the Dragoon Mountains, I traveled around the north end of the Chiricahua Mountains to the community of Portal, AZ on the east side. This is the location of Cave Creek/South Fork Canyon, which is one of the premier birding areas in the country during spring migration. April and May are the peak months.

This is in the Coronado National Forest. There are three national forest campgrounds at the mouth of the canyon. Sunny Flat is the largest and has high use. I arrived on April 9th and was very happy to get a site there. Otherwise there are a couple campgrounds down in the valley on Hwy 80 that accommodate RVs. 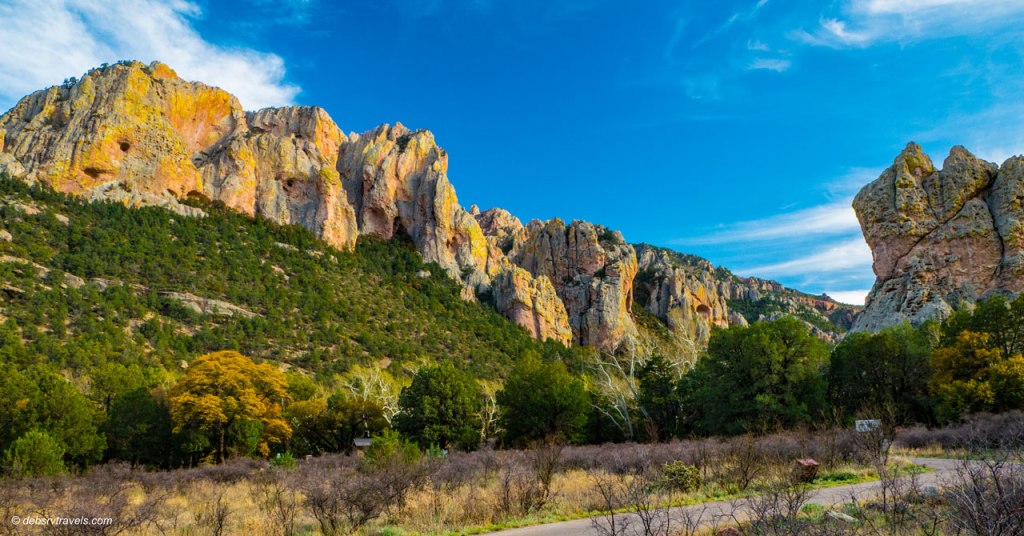 This area is home to a subspecies of whitetail deer known as Coues deer. They are quite small, standing around 32 inches at the shoulder and usually weighing less than 100 pounds. They are commonly seen around the campground, the visitors information center and along the trails. I would usually see three or four in the scrub near my campsite. Some mornings they would come crashing down the hillside as though being pursued. I never saw any predators, but there are mountain lions in the area and lots of bobcats. 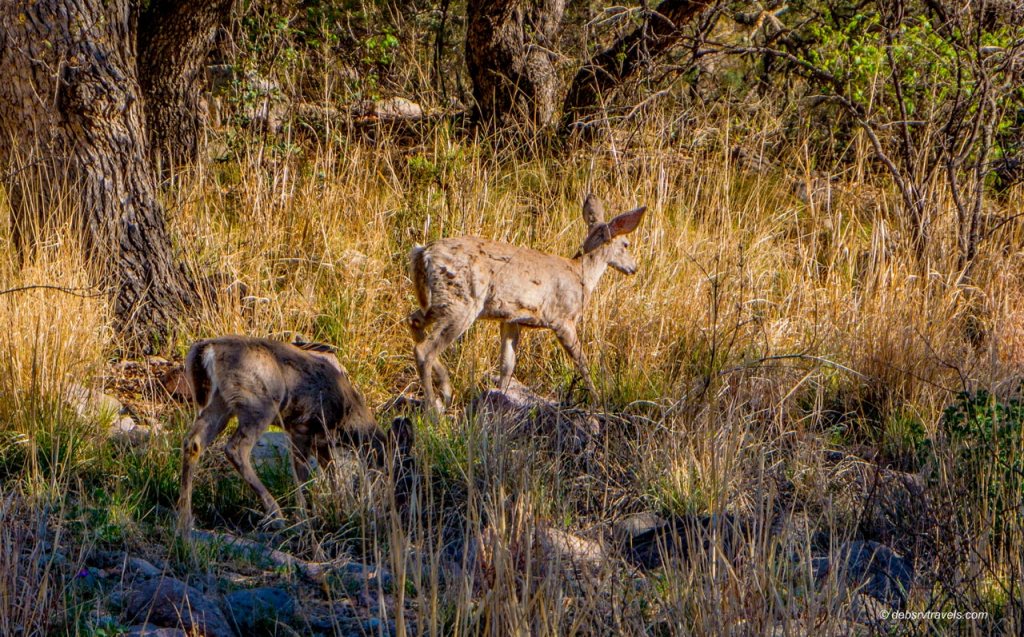 South Fork Canyon is the most popular birding trail in the area. I spent several days walking up the canyon, which is also very scenic with high canyon walls colored with yellow, red and green lichen. 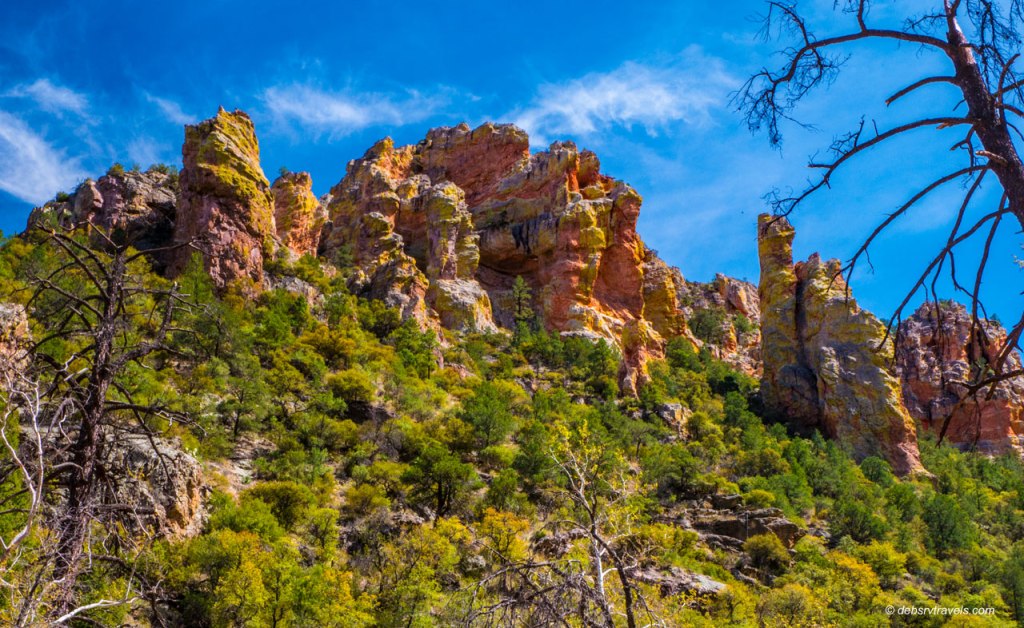 The first week I was there, the birding was amazing. One could easily see 30 different species of birds. During the two weeks I was here, I saw roughly 25 new life list birds! Of course this was my first time in the area, so almost every bird was new. Sadly I still had not purchased a long lens for my camera, so I was not able to get any bird photos. One morning I went birding with the camper in the site next to me. Sibylle was kind enough to share some of her photos with me to include in my post. Thanks Sibylle! 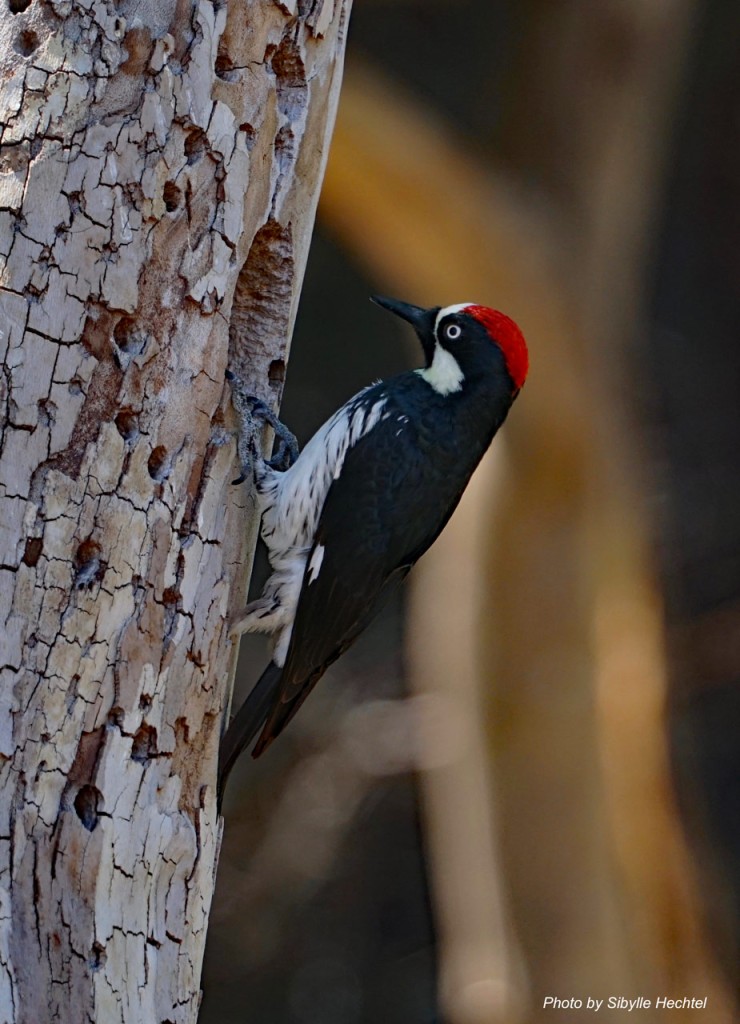 Acorn Woodpecker – one of the most common woodpeckers in the area

The premier bird that draws folks to the area is the Elegant Trogon. The trogon’s range is mostly in Mexico. Each year the Arizona Important Bird Areas organization conducts a spring survey to count the number of trogons in the Arizona mountain areas they are known to inhabit. The surveys indicate that the trogon is increasing its presence in Arizona. This is also occurring with other birds and mammals. The Elegant Trogon lives up to its name! 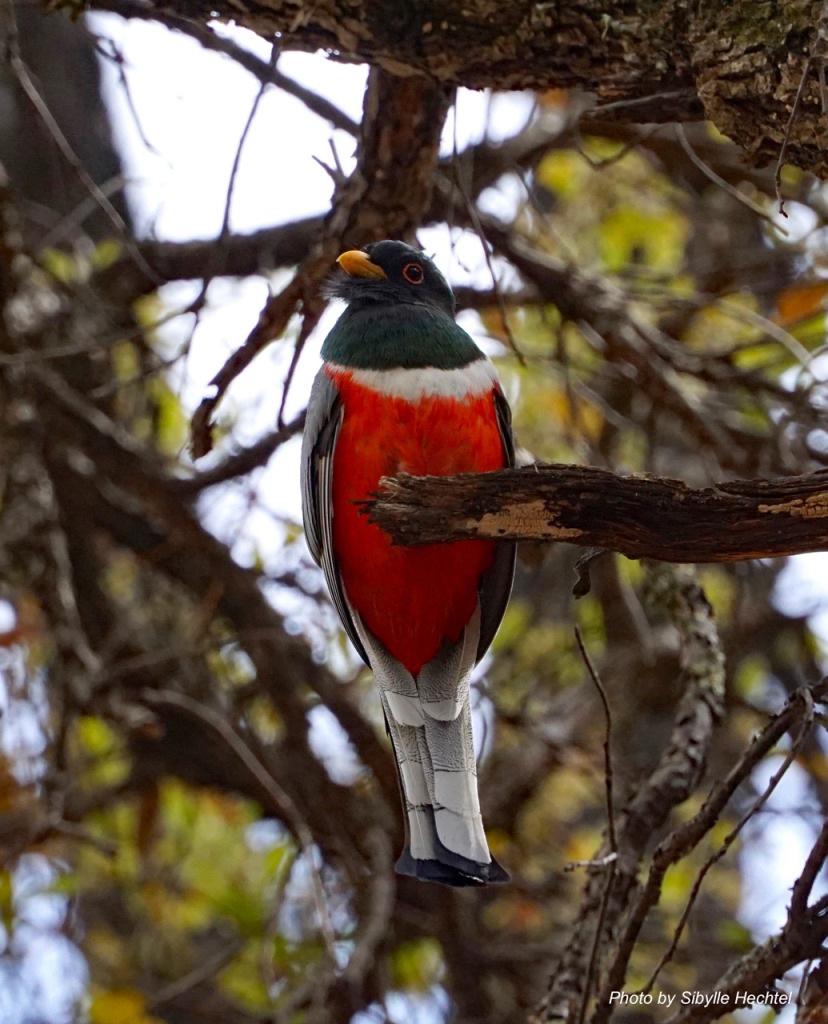 The most beautiful Elegant Trogon 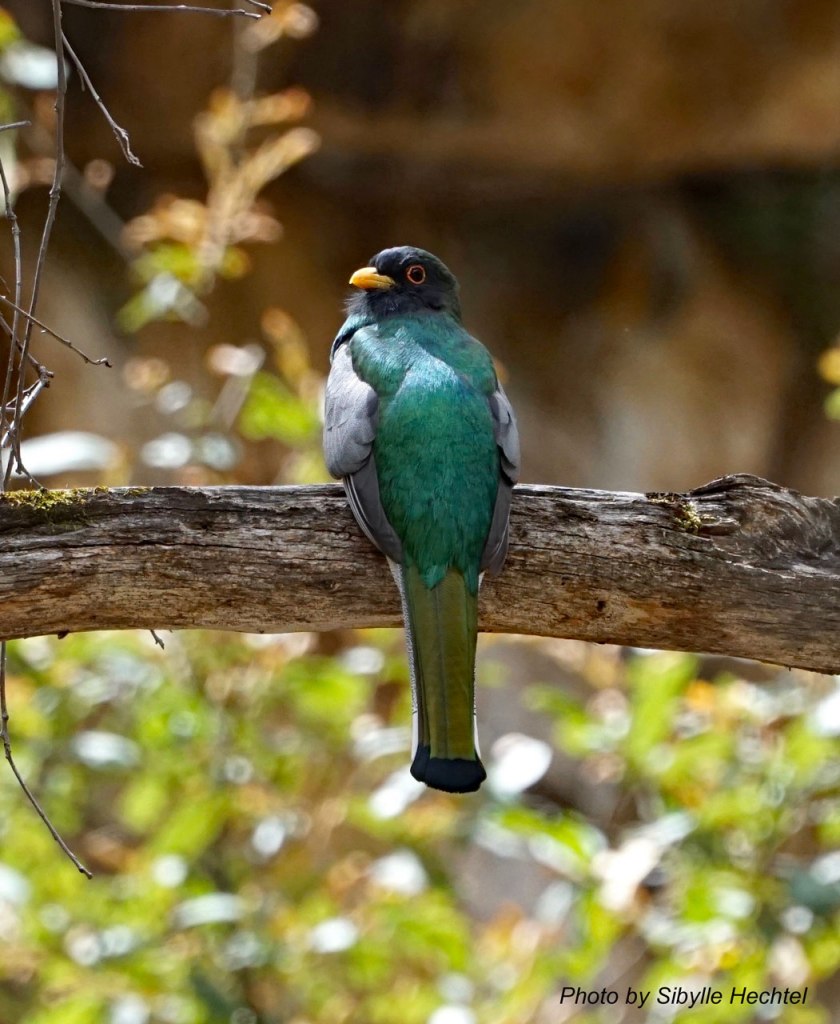 They can turn their head nearly 180 degrees. The contrasting green of the tail is gorgeous. 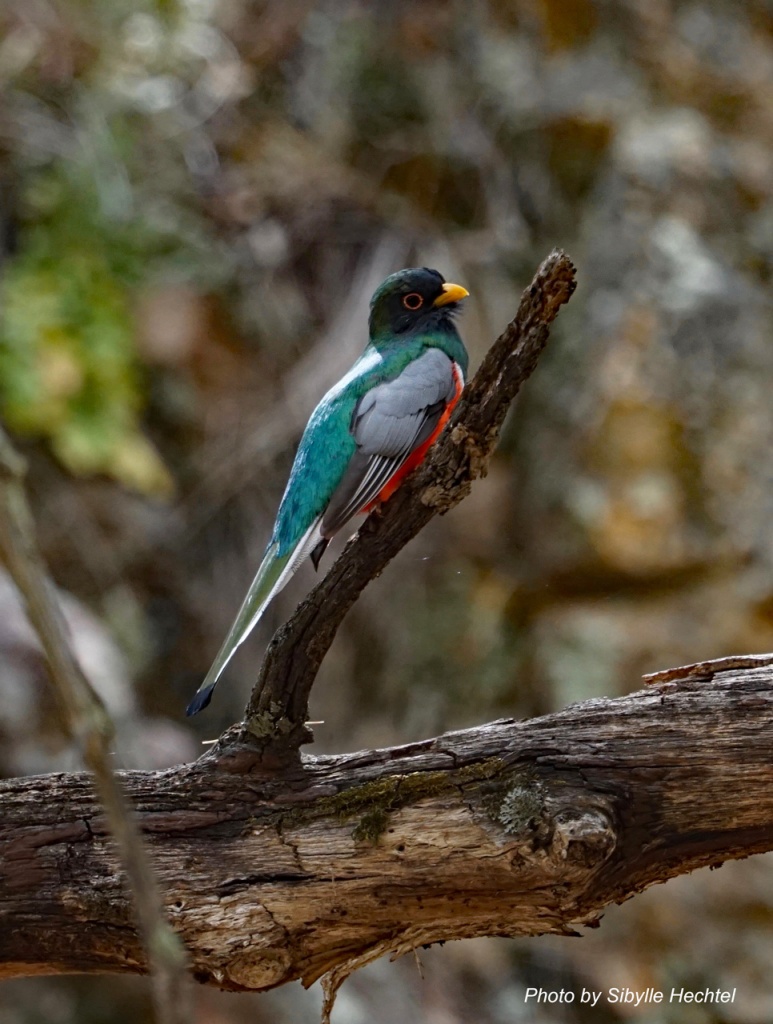 They don’t seem to have much fear of people and will stay around the same area for some time.

This area also sees a large hummingbird migration. The feeders put up by campers in Sunny Flat were drawing at least seven species of hummers. While I was here, hummingbird banding was conducted at the Southwest Research Station, just up the road from the campground. I went up that morning to observe the process. It was very interesting.

To capture the birds, a couple nectar feeders were enclosed with a nylon mesh net. The mesh was lowered to enclose the hummers so they could be captured. When enough had been captured, the mesh was raised until more were needed.

Capturing a hummingbird for banding

The captured birds were placed in small nylon mesh bags which were taken to the banding table and hung on a carousel. There were two people doing the examination of the bird and the banding, with two people writing down the information. 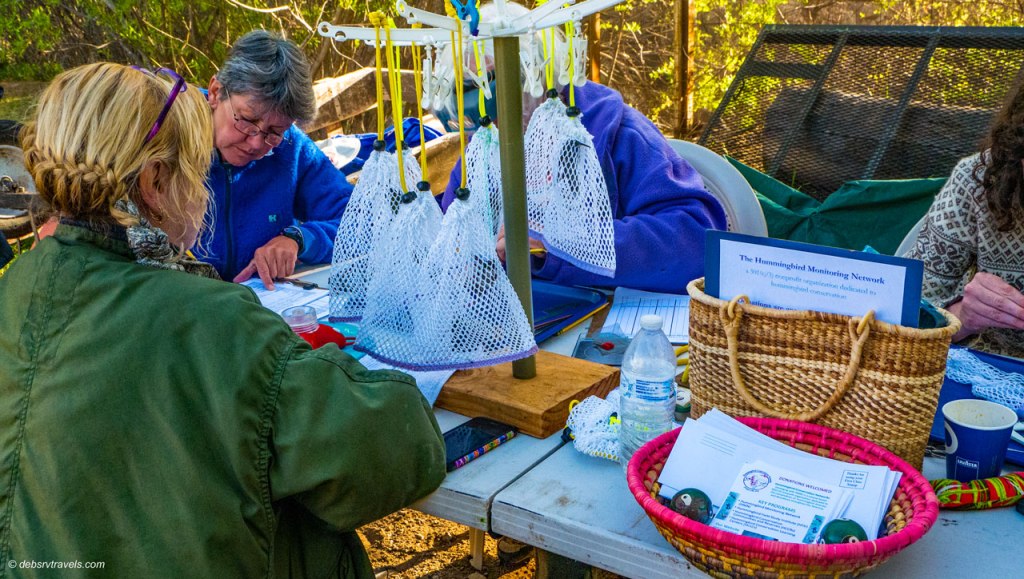 Hummers waiting to be examined and banded. Each bird is measured, weighed and examined for its condition.

The band is so tiny, you can’t really see it.

After the examination and banding were completed, the bird was allowed to drink from a nectar feeder to give it an energy boost and then it was released.

A hummer being fed nectar prior to release

A male Rivoli’s being released. Sometimes the bird will fly immediately and sometimes they will stay on the persons hand for a couple minutes.

I was allowed to hold a couple of the birds in my hand to release them which was very cool.

I would like to have stayed in Portal longer, but my 14 days at Sunny Flat Campground were up. I checked a couple other places I might camp, but didn’t find anything I liked. Also the nearest grocery store is sixty miles away in Douglas, and I needed groceries. I finally decided to go to the Sierra Vista area. They have all the stores and services there that I need. The San Pedro River is also another great birding area and I wanted to go back there.

One morning I hiked a one mile trail that follows Miller Creek up the canyon. I saw these deer along the way. They were pretty small and had very large ears, so I think they are also the Coues deer.

Wild turkey are pretty common in the mountains

After hiking about a mile, I arrived at the upper parking area for the Miller Canyon trail. Also the Beatty Guest Ranch is located here. They have a nice hummingbird feeding area with several nectar feeders. They allow birders to walk in to visit for a fee of $5. I read online that the record for the most hummingbird species observed in one day was set here – it was 13 species. Wow!

Some of the species have already migrated through. The Rivoli’s (formerly Magnificent) were present in the area. Along with the blue-throated, the Rivoli’s is one of the largest hummers, up to 5.25 inches in length.

A common species that is usually seen at feeders here is the broad-billed hummer. It is about 4 inches in length and has a bright red bill, dark blue throat and green back. It is one of the most colorful hummers.

Look at all the colors on this broad-billed hummingbird!

The first thing I did upon arriving in Sierra Vista was to order a new telephoto lens. It took about a week to receive it. I was able to get out three or four days to try it out. This is the first time I have used a long lens and also doing bird photography. So it is a learning process for me. Here are a few photos from the San Pedro House trails. This is a fabulous birding area also! 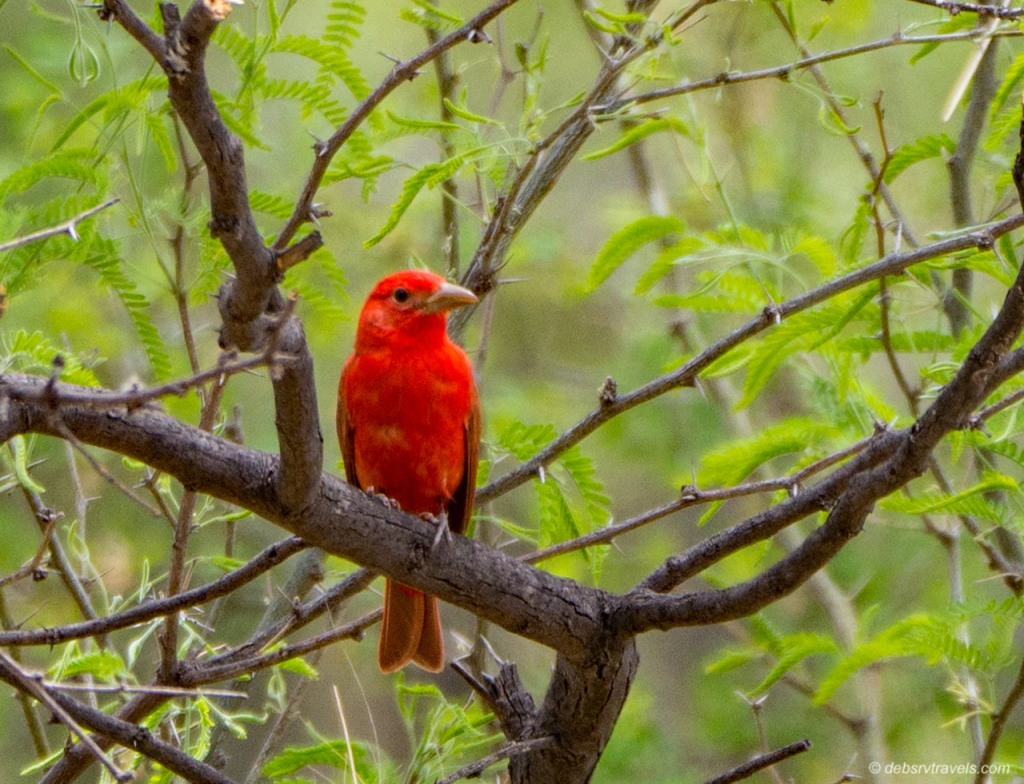 A pair of yellow warblers. The male never would come out from behind the tree.

Western screech owl, it was always sleeping when I was there.

And my favorite, the vermillion flycatcher

I have enjoyed my time here in southeastern Arizona, it is a beautiful place and I love all the birds that are here. But it will be heating up down here so time to think about starting north. I’m still working on a plan for the summer.