Posted on April 2, 2019 By debsrvtravels

From Ajo, I head east on Hwy 86 to Tucson, which turns out to be a nice drive. There were some wildflowers in bloom along the way as well as some snow still remaining on the higher mountain peaks.

When I lived in Colorado, I attended the Banff Mountain Film Festival World Tour each year. I have missed it the last couple years. It makes a stop in Tucson at the Fox Theatre downtown and I have tickets for all three nights. The Fox Theatre opened in 1930 and is the only Southwestern Art Deco theatre in the country. It closed down in 1974 and sat vacant until 1999, at which point it had deteriorated almost beyond restoration. In 1999 it was purchased by the Fox Tucson Theatre Foundation. After six years and a $13 million renovation, the Fox reopened on December 31, 2005. The renovation restored the theatre to its original décor, even down to the carpet, seat fabrics, and light fixtures. It is quite stunning, one of the most beautiful theatres I have seen. It is a beautiful venue for the film festival, which was great as always. 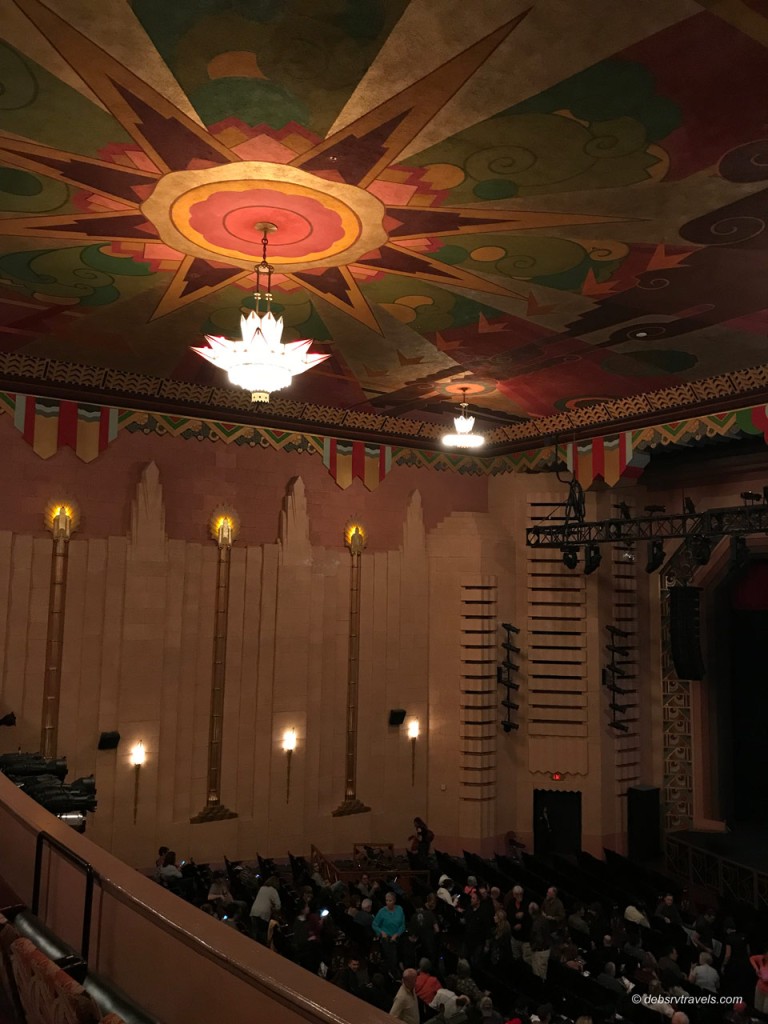 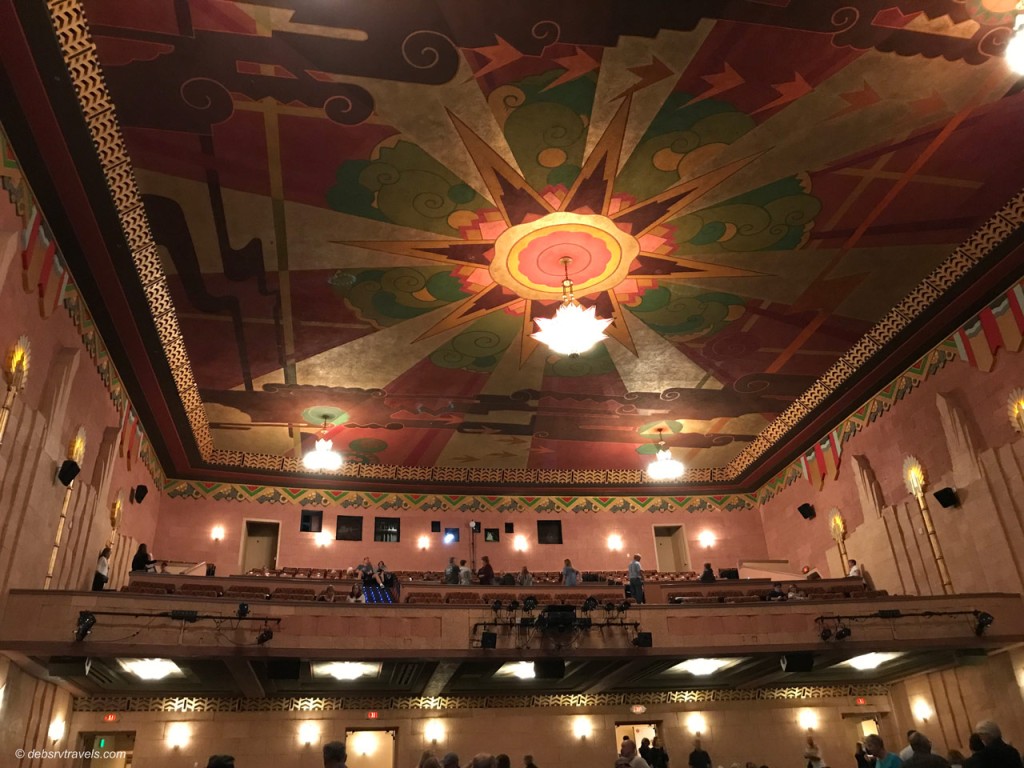 Also taking place while I was in Tucson was the 11th annual Tucson Festival of Books, which is held on the University of Arizona campus in downtown Tucson.

Admission to the festival and all events is free. It is held on a Saturday and Sunday, with lots of author panel discussions held throughout the day and covering a wide range of genres/topics. I only went on Sunday, but enjoyed it so much I wished I had also gone on Saturday. Another event to put on my schedule to try to attend annually. Several people had mentioned that one of the most popular panelists is Luis Alberto Urrea. I attended one of his panels entitled Divides That Blind Us, which also included Dr. Carol Anderson and Noa Baum.

The discussion was very thought-provoking. Urrea is quite a character, very entertaining. He reads his own books for the audio book recording. During the panel, he read a selection from his latest book, The House of Broken Angels, about trying to smuggle a parrot across the border and it was hilarious. I have just started listening to it. Dr. Anderson discussed her recent book entitled “White Rage”, which I subsequently read. While I thought I was fairly well informed on racial equality and justice issues in our nation, I learned so much from reading this book and highly recommend it.

Ed Asner of Mary Tyler Moore and Lou Grant fame was also on one of the panels I attended. He was hoot.

One day I drove the scenic highway to the summit of Mt. Lemon, the highest peak in the Santa Catalina Mountains at 9,157 ft. It is located in the Coronado National Forest. The drive starts in a beautiful saguaro forest. 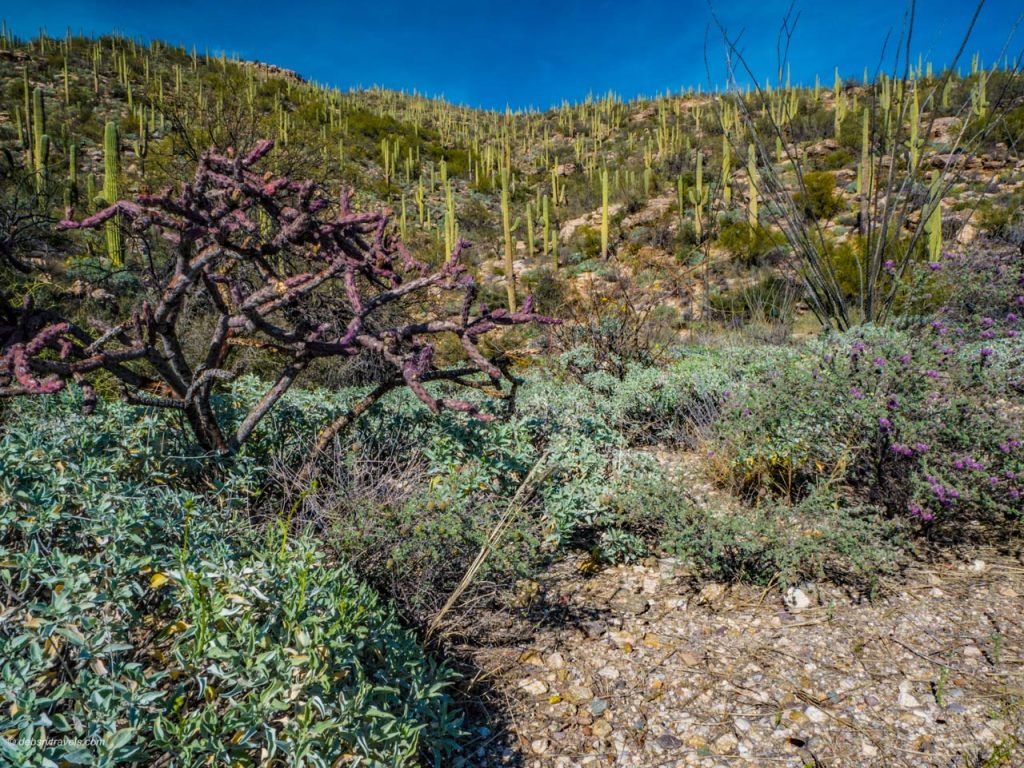 I never tire of seeing the beautiful saguaro cactus

There is lots of water flowing down the mountains from the snowmelt.

Amazing amount of water was coming off the mountains

Near the summit is Ski Valley. There is only a couple feet of snow but it’s enough to ski on I guess. I was there on a Tuesday when it is closed.

The last two miles of road beyond the ski area was closed to vehicle travel. I parked there and walked up the rest of the way. A lot of the snow has melted, but quite a bit remains.

Looking to the east

Located at the summit is the University of Arizona’s Steward Observatory.

The end of the road

Mt. Lemmon is where the locals go during summer to escape the heat. It is generally 30 degrees cooler than on the valley floor. There are a few forest service campgrounds along the highway and lots of hiking trails.

I got in some more hiking in Saguaro National Park West. The park is in the Tucson Mountains and the hiking trails are beautiful. One afternoon I hiked up to Wasson Peak, the highest point in the park. There are several routes to the summit, I started at the King Canyon trailhead. 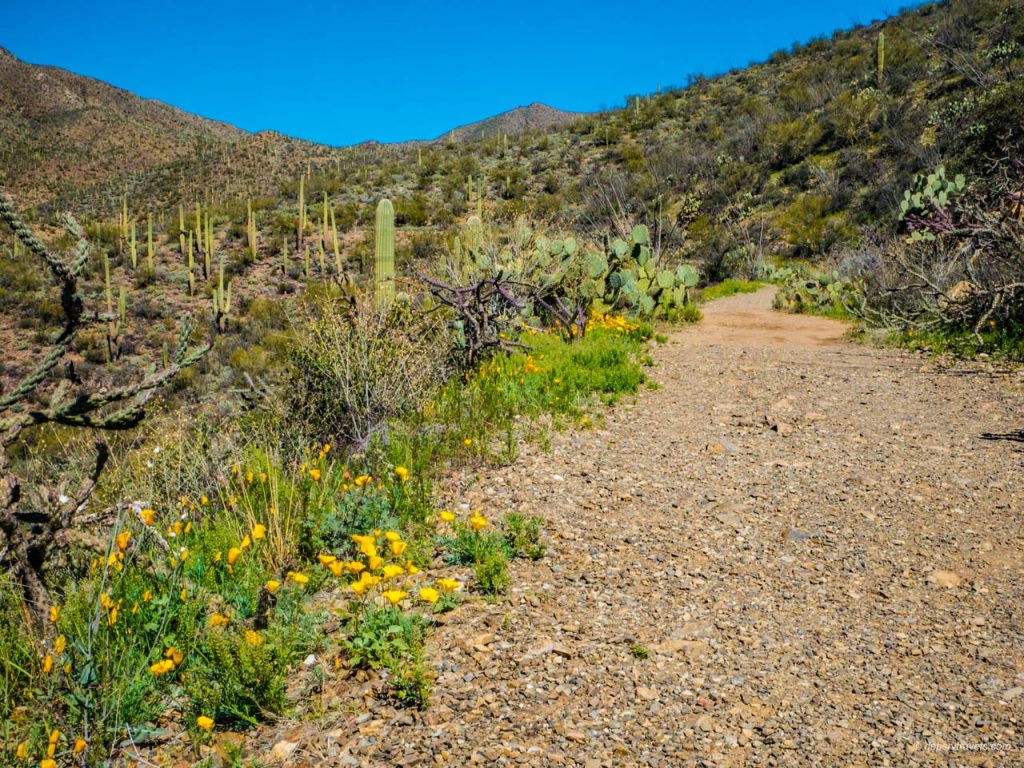 This little horned lizard ran across the trail almost right under my foot. 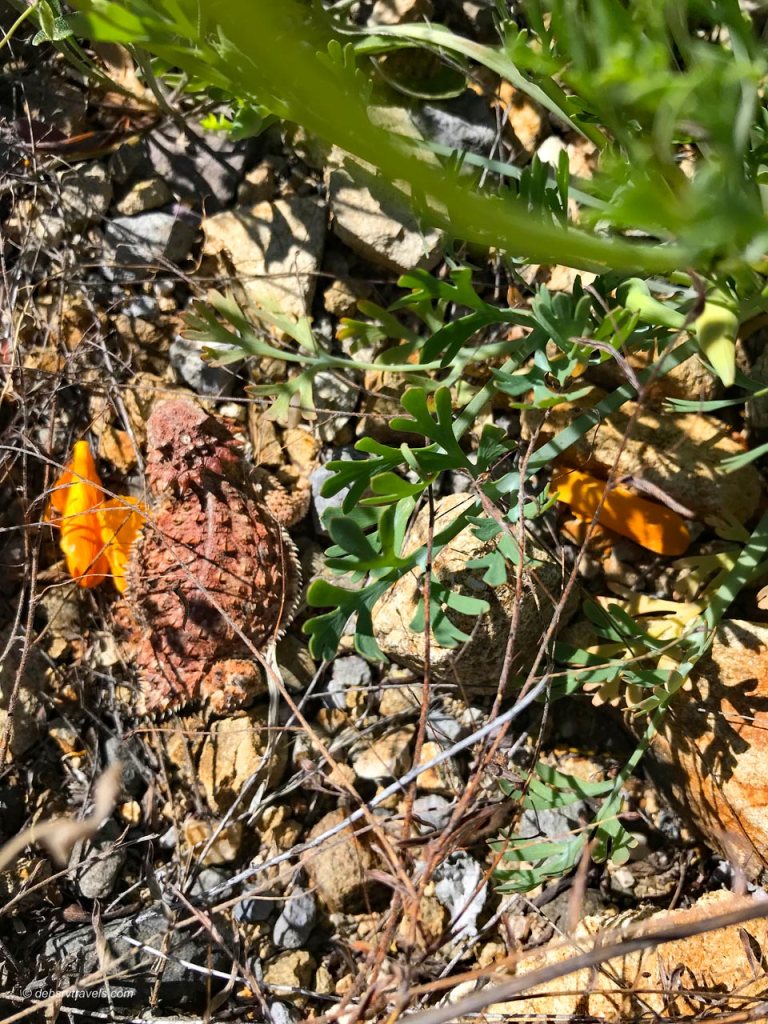 There were lots of poppies in bloom as well as other wildflowers. 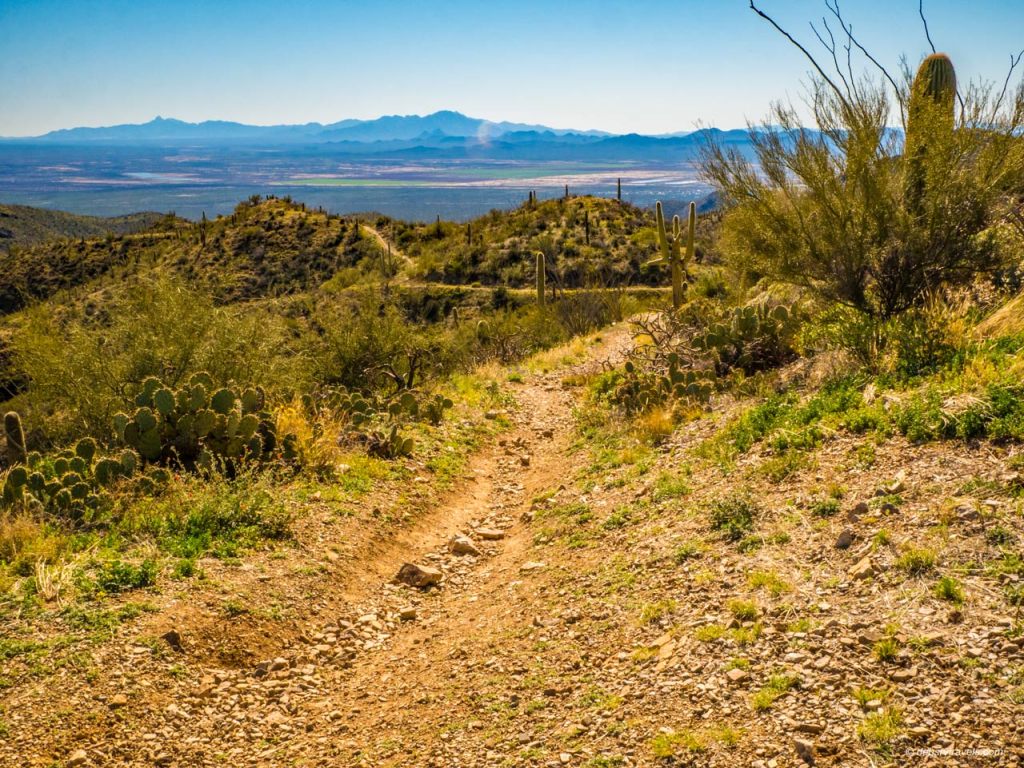 Looking back down the trail to the west 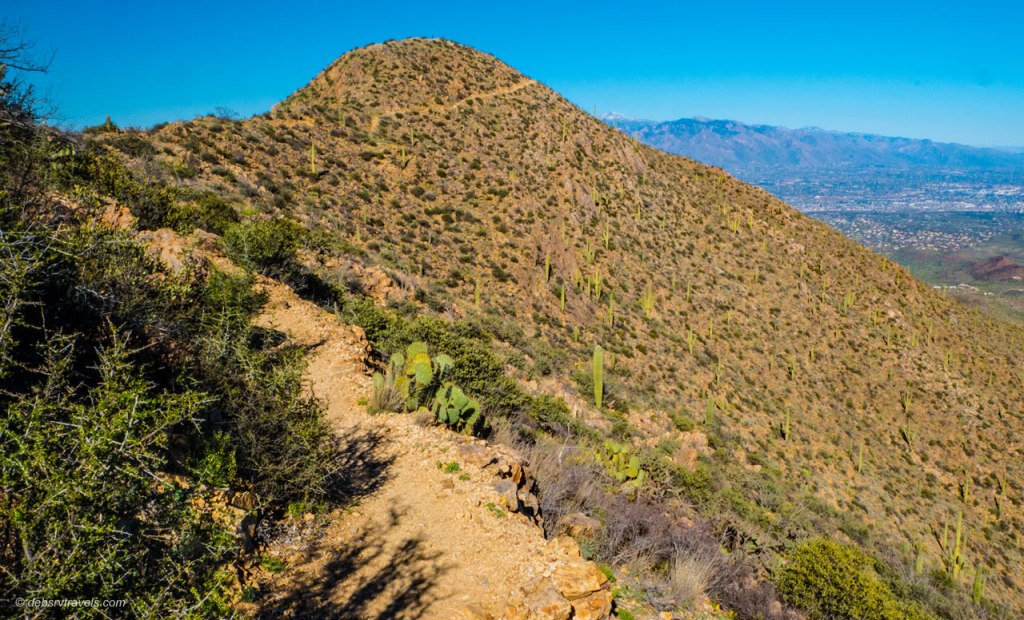 At a junction just ahead, the spur trail to Wasson Peak goes off to the right

This little rock wall was splashed with colorful lichen

I have had another great stay in Tucson; but I’m ready to leave the city behind and head to the mountains of southeast Arizona. 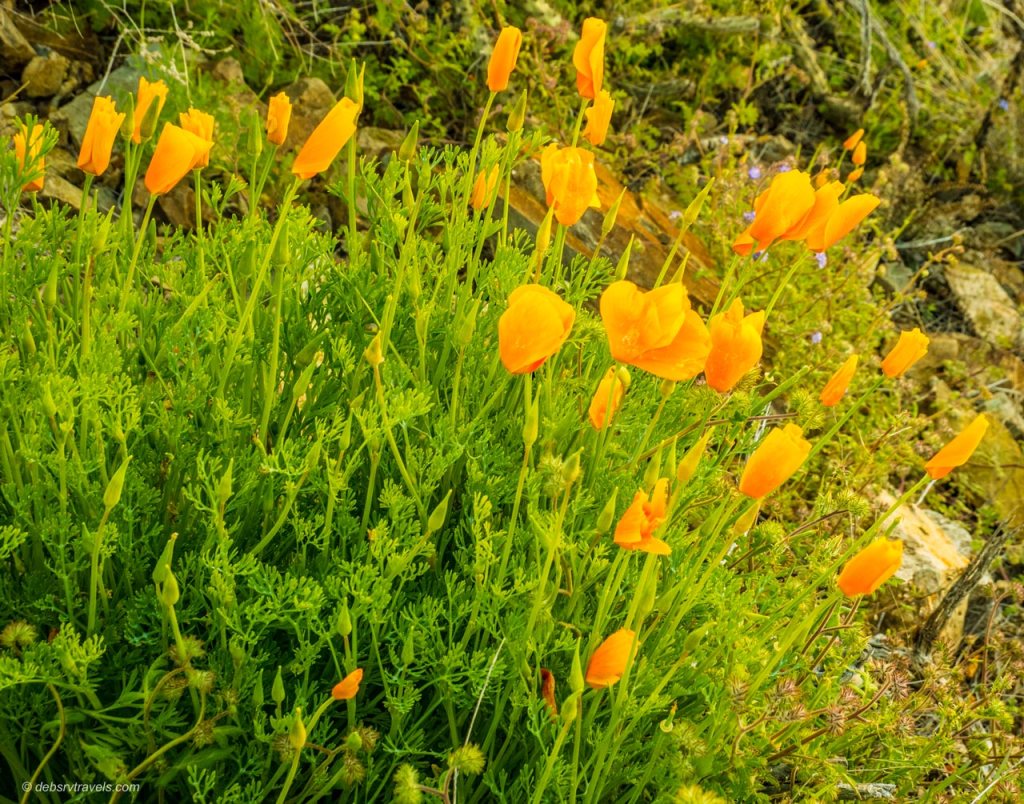